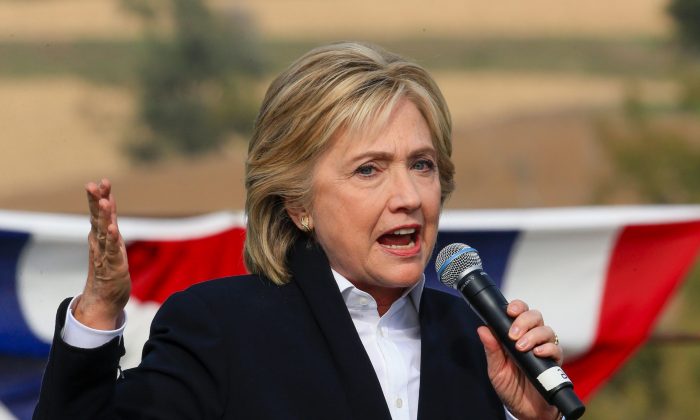 Clinton Pushes Back Against GOP on Veterans’ Health Issues

MANCHESTER, N.H.—Hillary Rodham Clinton is outlining steps to improve the Department of Veterans Affairs, pushing back against calls by Republicans to privatize the sprawling health care system for those who have served in the military.

The Democratic presidential candidate planned to discuss a package of proposals for veterans at a New Hampshire town hall meeting on Tuesday. Her pre-Veterans Day event comes as Republicans have questioned her commitment to veterans.

“I would like to see us have a top-to-bottom analysis of everything in the VA,” Clinton said last week in Iowa. She said she was concerned about calls by Republicans to privatize VA services “because I do not believe that will work. We will have too many veterans who will be left out or denied the care they need.”

Clinton’s plan would seek fundamental changes to veterans’ health care “to ensure veterans’ access to timely and high quality health care and block efforts to privatize” the Veterans Health Administration, her campaign said in an outline of the plan.

Related Coverage
World War II Veteran Gets Kicked out of His House, Then Local Businessman Steps In
Veteran’s Discount Card Gets a New Look and More

It would also seek to modernize the veterans’ benefits system across the federal government while seeking to offer more job opportunities to veterans.

Clinton said in an interview with MSNBC last month that the scandal involving chronic delays for veterans seeking medical care or seeking to have their claims processed had not been “as widespread” as suggested, and accused Republicans of politicizing the agency.

Republicans led by Arizona Sen. John McCain responded that Clinton had “a total lack of appreciation for the crisis facing veterans’ health care” and urged her to apologize.

Clinton has since said she was outraged by the problems and would seek a series of upgrades to improve care, services and job opportunities for the nation’s veterans.