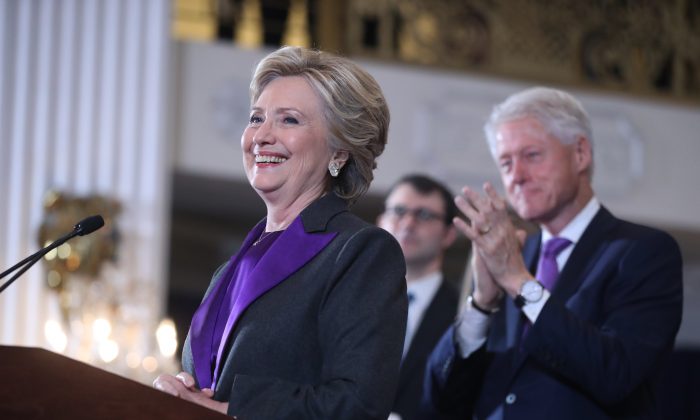 Clinton Offers Concession Speech: Give Trump a ‘Chance to Lead’

Former Secretary of State Hillary Clinton has offered a concession speech after losing her election to Donald Trump.

Clinton, who won the popular vote by a slim margin—but failed to take the Electoral College vote—made the statement on Wednesday morning in New York, according to live video feeds of the speech.

“This loss hurts,” she said, adding that Trump needs a “chance to lead.”

“This is not the outcome we wanted or we worked so hard for, and I’m sorry we did not win this election … but I feel pride and gratitude for this wonderful campaign that we built together,” Clinton told supporters.

Clinton, a Democrat, did not speak early Wednesday morning as it became clear that Trump, a Republican, was going to secure the presidency. Instead, she sent campaign manager John Podesta to address her supporters.

The former first lady added that while “this loss is painful,” her campaign “was never about one person or even one election.”

“We must accept this result, and then look to the future,” Clinton added. “Donald Trump is going to be our president. We owe him an open mind and the chance to lead.”

“I count my blessings every single day that I am an American,” she added. “And I believe that if we stand together and work together with strength of our convictions, our best days are still ahead of us. Because you know I believe we are stronger together and we will go further together.”

Clinton Calls Trump to Congratulate Him on Victory

Clinton also noted that she called Trump on Wednesday morning to congratulate him, adding she hopes “he will be a successful president for all Americans.”

She urged her supporters to offer the same to Trump, adding that “our constitutional Democracy demands our participation—not just every four years but all the time.”

Trump spoke to supporters on Wednesday morning in New York City, praising Clinton for her service. “It is time for us to come together as one united people,” he said, according to a live video stream of the event.

“I will be president for all Americans,” Trump vowed.

President Barack Obama, meanwhile, has spoken with President-Elect Trump, congratulating him on his victory, the White House said in a statement.