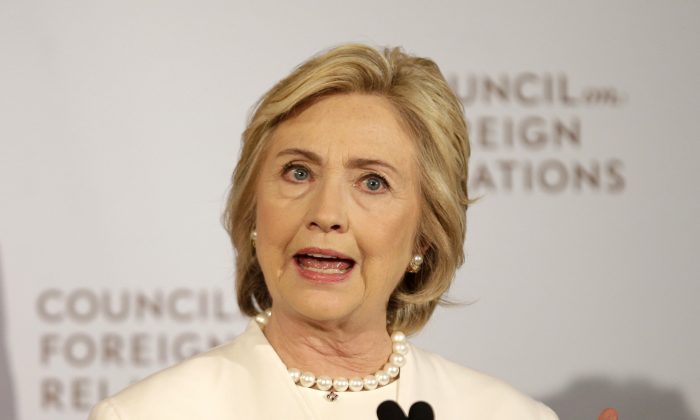 Clinton: No Troops in Syria, Even If Attack on US Soil

NEW YORK — Hillary Rodham Clinton vowed to keep American troops out of Syria in a sweeping foreign policy address, saying she would resist sending forces to fight Islamic militants even if there’s another terrorist attack within the US.

Offering a detailed assessment of the conflict in Syria, the Democratic presidential front-runner said America must lead the effort to fight Islamic State militants but called on Arab nations to supply much of the military force on the ground.

During a question-and-answer session with CNN’s Fareed Zakaria in New York, Clinton was asked if the pressure to send in U.S. ground troops to Syria would be “unstoppable” if another terrorist attack occurred in the U.S.

“It would certainly grow but I think it would be a mistake,” she said, noting her support for sending in more U.S. special forces, empowering U.S. trainers in Iraq and the use of an air coalition in the region. “Right now we need to keep the pressure on the people on the ground and get them to change their priorities and work together.”

While Clinton said she largely backed the president’s efforts to combat Islamic militants, she said the US should prioritize efforts to defeat Islamic extremists over ousting Syrian President Bashar Assad. President Barack Obama says both have to happen in tandem.

Clinton reiterated her support for a no-fly zone over the northern region of the country, a measure opposed by Obama, saying it would help with conditions on the ground and pressure Assad to reach a political settlement in peace talks being brokered by Secretary of State John Kerry.

“Right now we have one overriding goal as I outlined we need to crush their territorial domain,” she said. “We have to prioritize.”

Speaking just hours before her primary rival Vermont Sen. Bernie Sanders was set to address the conflict, Clinton urged Americans to overcome partisan battles and rise above personal fear to combat the threat of jihadism across the globe. She said the U.S. must welcome refugees from the region even as the country toughens its defenses at airports, online and in the financial sector. Clinton also urged Congress to “swiftly” pass an updated authorization to use military force against the militants.

“Turning away orphans, applying a religious test, discriminating against Muslims, slamming the door on every Syrian refugee, that is just not who we are. We are better than that,” she said.

She urged Turkey and Saudi Arabia to redirect their attention from battling Kurdish forces and the conflict in Yemen to the fight against Islamic State militants. And she promised that her broader approach would not lessen the pressure on Iran to comply with recently completed nuclear deal.

“This is a time for American leadership. No other country can rally the world to defeat ISIS and win the generational struggle to defeat jihadism,” she said. “The entire world must be part of this fight, but we must lead it.”

Her emphasis on American leadership marks a shift in tone from the second Democratic debate on Saturday, where Clinton said that the battle “cannot be an American fight.”

Her remarks also drew a striking contrast with many of her Republican opponents who have advocated for a large-scale military mobilization, new measures to bar Syrian refugees from entering the country and a congressional declaration of war.

Former Florida governor Jeb Bush on Wednesday called for the US to “increase our presence on the ground,” in a speech in South Carolina. Bush offered no specifics, but said the number of Americans sent to the region should be “in line with what our military generals recommend, not politicians.”

In Congress, House Republicans are pushing legislation toward approval that would erect fresh hurdles for Syrian and Iraqi refugees trying to enter the country. President Barack Obama has promised to veto the bill.

“America’s open, free, tolerant society is described by some as a vulnerability in the struggle against terrorism, but I actually believe it’s one of our strengths,” she said. “This is not a time for scoring political points.”

Republicans have sought to link Clinton to the unpopular foreign policy of Obama, casting her as continuing his strategy in the region. His critics have said he underestimated the threat posed by Islamic State militants, noting he once referred to the group as the “JV squad.”

“From Libya to Russia to China, Hillary Rodham Clinton has been the chief architect of the Obama administration’s failed policy of coddling adversaries, disrespecting allies and leading from behind,” said Steven Law, head of American Crossroads, a Republican political group, in a statement.