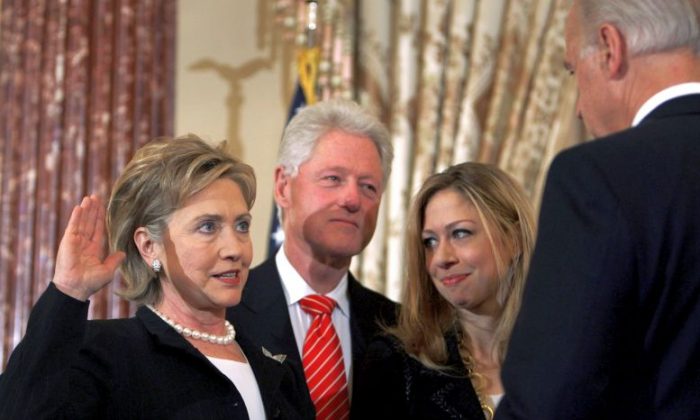 In this Feb. 2, 2009 file photo, Vice President Joe Biden, right, swears in Secretary of State Hillary Rodham Clinton in a ceremonial swearing-in at the State Department in Washington, accompanied by her husband, former President Bill Clinton, and their daughter, Chelsea. This time, it's Bill Clinton's turn to be the adoring spouse, rapt and smiling when the cameras cut away from the candidate in the spotlight. He’ll be the He in the VIP box watching as a She accepts the presidential nomination at the Democratic convention on Thursday, July 28, 2016. It's one small step in the role reversal that Americans will need to get used to if Hillary Clinton wins in November. (AP Photo/Lawrence Jackson, File)
News

NEW YORK—The charitable foundation led by former President Bill Clinton will no longer accept foreign and corporate donations if Hillary Clinton is elected president and will hold its final annual Clinton Global Initiative meeting in September regardless of the outcome of the November election.

Bill Clinton announced the changes to the foundation in a staff meeting on Thursday, saying he and daughter Chelsea Clinton would be remiss if they didn’t plan for the possibility of Hillary Clinton winning the White House.

The former president said the foundation would continue its work but refocus its efforts in a process that will take up to a year to complete. Ahead of celebrating his 70th birthday on Friday, Clinton said he would resign from the board and would only accept contributions from U.S. citizens and independent charities if his wife was elected president.

Amid criticism of cronyism from Republicans, the changes aimed to address how the Clinton Foundation would function in the event of another Clinton presidency and push back against Donald Trump’s critique that the sprawling foundation had created conflict of interests and allowed foreign governments to peddle influence with Hillary Clinton.

Under the changes, the foundation would no longer take money from any foreign entity, government, foreign or domestic corporations, or corporate charities. A Clinton spokesman said the former president will also refrain from delivering paid speeches until the November election and will no longer give paid speeches if Hillary Clinton is elected.

At the staff meeting, Clinton said he and his daughter did not face any external pressure to make the changes, but wanted to avoid any potential issues or second guessing for Hillary Clinton should she move into the White House.

Republicans said the changes fell short and urged the Clinton Foundation to immediately stop receiving foreign donations. Republican National Committee Chairman Reince Priebus said the foundation “should immediately cease accepting foreign donations and return every penny ever taken from other countries, several of which have atrocious human rights records and ties to terrorism.”

Priebus said the foundation’s continued acceptance of foreign donations during Hillary Clinton’s presidential campaign was a “massive, ongoing conflict of interest that gets bigger by the day.”

The sprawling charitable network, founded after Bill Clinton left office in 2001, has raised more than $2 billion for initiatives focused on global health, climate change, economic development and increasing opportunities for women and girls.

While Hillary Clinton stepped down from its board after launching her 2016 campaign, her husband and daughter have remained in leadership roles, prompting questions about the ability of the organization to continue its work during a future Clinton administration.

Some of the group’s funding has come from foreign donations and political donors to the Clinton family. Money accepted from countries such as Saudi Arabia drew scrutiny from both Republicans and Democrats early in Clinton’s presidential bid.

When Clinton served as secretary of state, the foundation reached an agreement with the Obama administration to prohibit, and in some cases curtail, foreign donations to its programs. But questions persist about the level of influence foundation donors had at the State Department. That criticism intensified after emails from Clinton’s time at the department were made public as part of a lawsuit.

After she left the State Department, the foundation resumed accepting donations from overseas. Bowing to pressure in April 2015, the group announced that it would restrict donations to only six Western nations and disclose its donors more frequently.

Former Sen. Richard Lugar, a Republican from Indiana who questioned Hillary Clinton at length about thefoundation and potential conflicts of interest in her 2009 nomination hearing, said this week that he was hopeful that she would make a clean break from the foundation if she’s elected president.

“The Clintons, as they approach the presidency, if they are successful, will have to work with their attorneys to make certain that rules of the road are drawn up to give confidence to them and the American public that there will not be favoritism,” Lugar said.

Members of the Clinton Foundation board ratified the changes Thursday. The decision means that the former president will convene in September his 12th and final Clinton Global Initiative, an annual meeting that coincided with the U.N. General Assembly and frequently included President Barack Obama, foreign heads of state, corporate executives and celebrities to address commitments aimed at addressing poverty, health care, education, climate change and other topics.

The foundation has estimated that commitments by its members have improved the lives of more than 430 million people in more than 180 countries.