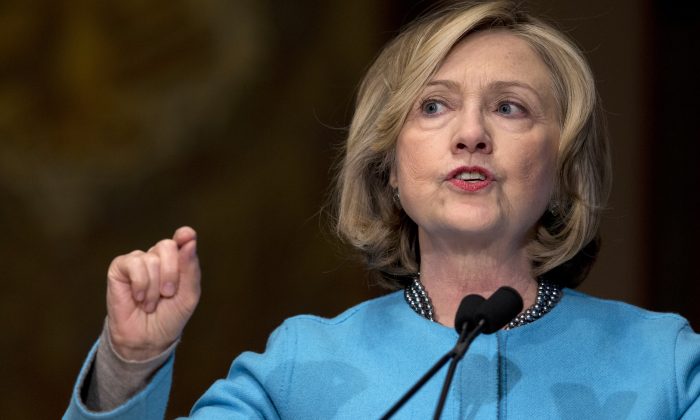 FILE - In the Dec. 3, 2014 file photo, former Secretary of State Hillary Rodham Clinton speaks at Georgetown University in Washington. Clinton, the presumed Democratic front-runner, may soon encounter a unique challenge for a presidential candidate: How to prepare for a campaign in which she may not be fully tested in the primaries. (AP Photo/Carolyn Kaster)
US

Hillary Clinton is being criticized for the Clinton Foundation allowing donations from foreign governments and their agencies, which could produce a conflict of interest were she to become president.

Records on the Clinton Foundation’s website show that it received tens of millions of dollars from the governments of Saudi Arabia, the United Arab Emirates, and Germany, in a story first reported by the Wall Street Journal.

“The core of the problem is that foreign governments and entities may perceive the Clinton Foundation as a means to gain favor with the Secretary of State. Although neither Senator Clinton nor President Clinton has a personal financial stake in the foundation, obviously its work benefits their legacy and their public service priorities,” then Sen. Richard Lugar (R-Ind.) said at Clinton’s nomination hearing in 2009. “Every new foreign donation that is accepted by the foundation comes with the risk it will be connected in the global media to a proximate State Department policy or decision.”

The foundation also received between $250,000 and $500,000 from the Foreign Affairs, Trade and Development agency of Canada, which has the stated goal of promoting the construction of the Keystone XL pipeline, an issue on which Clinton has repeatedly decline to comment.

The foundation has stood by the donations.

“The Clinton Foundation is a philanthropy, period,” spokesman Craig Minassian said in a statement. “As with other global charities, the Clinton Foundation receives the support of individuals, organizations, and governments from all over the world because our programs are improving the lives of millions of people.”