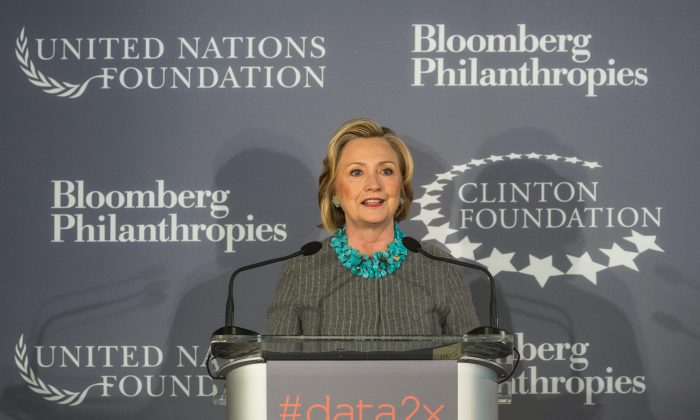 Newly released emails show that top donors of the Clinton Foundation were given expedited access to Hillary Clinton and were able to request favors while she served as secretary of state.

The 725 pages of emails, which were obtained by conservative watchdog Judicial Watch as part of a freedom of information request and released on Aug. 22, are adding to concerns that Clinton improperly used her official position to favor donors—a claim her campaign has denied.

The emails contain detailed exchanges that show Clinton’s top aide, Huma Abedin, fielding requests from Doug Band, a top executive of the foundation and a longtime counselor to Bill Clinton, on behalf of the foundation’s biggest donors.

Unable to secure a meeting with the secretary of state through normal State Department channels, Crown Prince Salman of Bahrain requested a meeting in June 2009 through the Clinton Foundation.

Abedin responded that same day, saying, “He asked to see hrc thurs and fri thru normal channels. I asked and she said she doesn’t want to commit to anything for thurs or fri until she knows how she will feel. Also she says that she may want to go to ny and doesn’t want to be committed to stuff in ny…”

Two days later, Abedin wrote to Band: “Offering Bahrain cp 10 tomorrow for meeting woith [sic] hrc [.] If u see him, let him know [.] We have reached out thru official channels.”

In 2005, Salman committed to launching the Crown Prince’s International Scholarship Program, which provides funding to educate Bahraini students for leadership positions, through the Clinton Global Initiative (CGI). By 2010 the program had “significantly exceeded the $32 million original target” through donations from private companies, the organization said.

The Kingdom of Bahrain is listed on the Clinton Foundation website as having contributed between $50,000 and $100,000 to exclusively fund CGI activities.

Another email exchange shows how billionaire investor S. Daniel Abraham, who has donated between $5 million and $10 million to the Clinton Foundation, received expedited access to the secretary of state in May 2009.

Abedin wrote to Clinton in an email on May 4, 2009: “Danny abraham called this morning. He is in dc today and tomorrow and asked for 15 min with you. Do u want me to try and fit him in tomorrow?”

Clinton replied to the email, which had the simple subject line “Danny,” within less than 45 minutes, saying: “Will the plane wait if I can’t get there before 7-8?”

To which Abedin replied: “Yes of course.”

Another email exchange showed Band urging Abedin to help Hollywood sports entertainment executive Casey Wasserman obtain a visa for a member of the U.K.’s Wolverhampton Wanderers F.C. soccer club. The soccer player had trouble gaining permission to enter the country because of a “criminal charge.”

Abedin replied to the request forwarded by Band: “I doubt we can do anything but maybe we can help with an interview. I’ll ask.” In a subsequent email she wrote: “I got this now, makes me nervous to get involved but I’ll ask.”

Wasserman has donated between $5 million and $10 million to the Clinton Foundation through the Wasserman Foundation, for which he serves as president and CEO.

The new cache of emails comes after Judicial Watch released earlier this month 296 pages of State Department records. Those emails showed Band asking in an April 2009 email, under the subject line “A favor…”, for help with getting someone hired at the State Department. Another showed Band making a request on behalf of Lebanese-Nigerian billionaire Gilbert Chagoury, a top Clinton Foundation donor.

Each member of the Clinton family has played a crucial role in fundraising for the foundation, which has raised over $2 billion since its establishment in 1997.

Amid increasing criticism over the family’s fundraising activities while Hillary Clinton is running for president, Bill Clinton said on Aug. 18 that the foundation would stop accepting foreign and corporate elections if she were elected president.

An investigation by The Associated Press on Aug. 23 showed that more than half of the people outside the government who met with the secretary of state had donated money—either personally or through companies or groups—to the Clinton Foundation.

Clinton campaign manager Robby Mook dismissed the AP article, saying that the media organization had been “cherry-picking” the Democratic nominee’s schedule. According to Mook, over 1,700 other meetings Clinton had while serving as secretary of state had not been included.

The AP article, however, stated that it did not include meetings with U.S. federal employees or foreign government representatives because such meetings would have been part of her diplomatic duties.

Trump also called for the foundation to be “shut down immediately.”

“The Clintons have spent decades as insiders lining their own pockets and taking care of donors instead of the American people,” said the Republican nominee in a statement on Aug. 22.

The organization describes itself as an on-the-ground foundation that helps with international programs on various matters such as economic development, climate change, health and wellness, and gender equality. It received an A grade from CharityWatch.org in April this year.