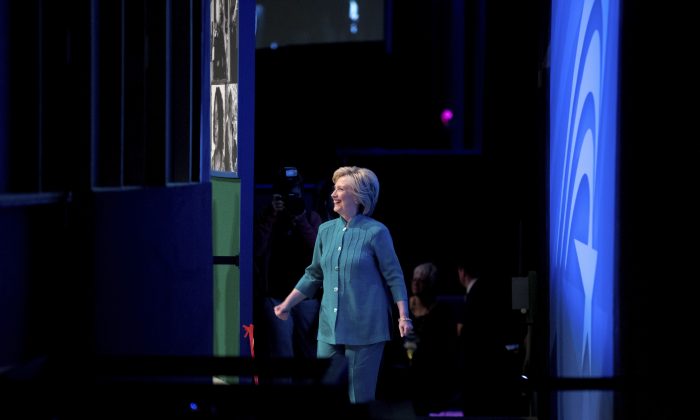 LAS VEGAS—Hillary Clinton dismissed the first day of the Republican National Convention as a “surreal” experience on Tuesday, comparing the gathering led by Republican Donald Trump to the classic fantasy film “The Wizard of Oz.”

“There were similarities that appeared to me. Lots of sound and fury — even a fog machine,” Clinton told 6,000 people at the convention of the American Federation of State, County and Municipal Employees in Las Vegas. “But when you pull back the curtain, it was just Donald Trump with nothing to offer to the American people.”

Clinton rallied labor allies in Nevada as Republicans met in Cleveland for the second day of the national convention where delegates are expected to officially select Trump as their party’s nominee. Speaking to longstanding Democratic allies, Clinton noted Trump’s shadowy appearance before he introduced his wife, Melania Trump, but made no mention of allegations that she lifted passages of her speech from first lady Michelle Obama’s 2008 address.

Bracketing Trump, the presumptive Democratic nominee said “last night in Cleveland was surreal,” prompting a chorus of boos at the mention of her Republican rival’s name. She added that viewers heard a lot about her and Trump but “not a single solution” that would help workers and their families.

She pointed to ongoing struggles with Republican governors in the Midwest, accusing Wisconsin Gov. Scott Walker, a former GOP presidential hopeful, of ripping “the heart out of public sector workers’ right to bargain.”

In Illinois, she accused Gov. Bruce Rauner, a Republican elected in 2014, of “holding the budget hostage for months,” hurting families and demanding “outrageous concessions” to fix a multibillion dollar deficit.

She also warned that Trump would undercut the Dodd-Frank Act passed six years ago this week by Congress in response to the financial crisis. Trump, Clinton said, wanted to “tear up Dodd-Frank and let Wall Street run wild again.”

Clinton later rallied supporters in North Las Vegas, where she picked up the endorsement of the 270,000-member UNITE HERE union that represents workers in the hotel, gaming and food service industries. The union’s largest affiliate is the local Culinary Workers Union, a powerhouse in Nevada politics that declined to endorse during the primaries.

Nevada is among the top battleground states in the fall election and Clinton used the events to point to a new voter mobilization push under way by the campaign aiming to register more than 3 million voters and have them commit to vote in the election.

“We’re not leaving anything to chance,” she said.