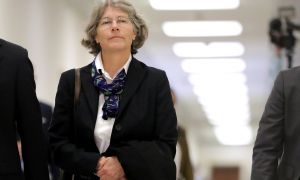 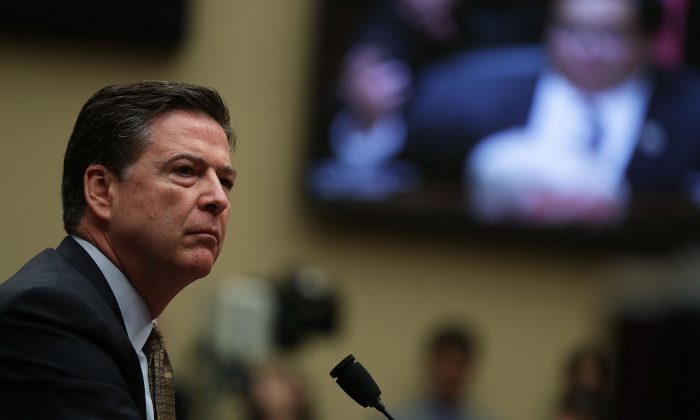 Hundreds of Hillary Clinton’s emails that included classified information from her tenure as secretary of state sat in a private Gmail account for more than two years and were still there about two weeks before then-FBI Director James Comey cleared Clinton in a 2016 statement of criminal responsibility for mishandling the country’s secrets.

The Gmail account came under the scrutiny of Republican lawmakers because its name—”carterheavyindustries@gmail.com”—mirrored that of a Chinese company, Shandong Carter Heavy Industry Machinery Co. Ltd. The similarity raised concerns that a foreign actor had gained access to Clinton’s emails.

Platte River Networks (PRN) employee Paul Combetta, who managed Clinton’s email server between 2013 and 2015, said he made up the name of the email address and used it in February 2014 to transfer an archive of Clinton’s emails to a new server. The emails seem to have covered a period from about 2009 to mid-2013—including most, if not all, of Clinton’s time at the State Department.

But Combetta apparently failed to delete all of the emails from the Gmail account after the transfer.

“The FBI determined that 820 of Clinton’s emails, dated between October 25, 2010, and December 31, 2010, remained in the … email account,” stated a June 2018 report on the Clinton investigation by the Justice Department’s Inspector General (IG) Michael Horowitz.

It wasn’t until June 20, 2016—about two weeks before Comey’s July 5 statement—that the FBI sought a search warrant “to view the content of these emails and search for other emails relevant to the investigation,” the report said, also stating that “the FBI was able to confirm that classified information continued to reside in … the account belonging to Combetta.”

The search warrant stated that 57 of the emails “have been determined … to contain information currently classified at the Confidential level.” Of those, one email “although not marked as
such, was classified at the Secret level at the time the email was sent.”

Gmail is a free email service provided by Google, which scans the contents of users’ mailboxes to personalize its services, according to a 2017 Variety report. That opens the possibility that Google had scanned the entire content of Clinton’s email archive.

Horowitz had promised Congress in 2018 that he would look into what the FBI did to investigate the Gmail account matter. Horowitz reported back in an April 9 letter (pdf) to Sens. Chuck Grassley (R-Iowa) and Ron Johnson (R-Wis.) with his office’s findings.

The IG “did not identify any information obtained by the FBI during the … investigation reflecting that Combetta’s … email account was associated with a Chinese company or the Chinese government,” the letter said.

“In addition, based on the evidence the DOJ OlG reviewed, the FBI did not find evidence during its … investigation that Combetta (or anyone else) forwarded classified emails from the … email account to a foreign or domestic entity.”

The FBI had obtained a court order to obtain “business records concerning the Combetta … email account,” the letter read.

The IG reviewed the records and determined that Combetta set up the account in 2012.

“Subscriber and login information obtained by the FBI confirmed that the … email account was Combetta’s,” the letter said, noting the records showed the account was created by a “subscriber whose phone number was registered to Combetta.”

The letter also states that “logins in 2015 and 2016 [to the account] were from an IP address linked to the location where Combetta lived and worked remotely for PRN.”

It’s not clear, however, how far back the FBI was able to obtain the login data. The letter doesn’t address whether somebody accessed the account prior to 2015.

Given the sensitivity of Clinton’s emails, apparently amid the Benghazi scandal at the time, it’s unclear why Combetta would choose to use a Gmail account to transfer the emails, why he didn’t set up a new account for the purpose, and why he failed for years to delete all of the emails from the account.

He declined to be interviewed by the IG.

The way Combetta obtained the email archive in the first place could raise more questions still.

He took over the management of Clinton’s emails in mid-2013 from Bryan Pagliano, former IT director for Clinton’s 2008 presidential campaign and later State Department employee.

It was Pagliano who infamously set up the private email server in the basement of Clinton’s house in Chappaqua, New York.

Combetta set up a new server at a facility in Secaucus, New Jersey, and around June 30, 2013, transferred all of the email accounts from the old server to the new one.

“At around the time of the transition to the PRN server in the spring of 2013, Clinton’s former aide, Monica Hanley, created two archives of Clinton’s emails from the Pagliano Server, one on a thumb drive (Archive Thumb Drive) and one on a laptop computer (Archive Laptop),” the 2018 IG report states.

“In early 2014, Hanley mailed the Archive Laptop to Combetta to transfer Clinton’s archived emails to the PRN server. She further directed him to ‘wipe’ the Archive Laptop and mail it to Clinton’s office assistant at the Clinton Foundation after he completed the transfer.”

It’s not clear what compelled Hanley to ask Combetta to transfer the emails to the PRN server half a year after all of the emails had already been successfully migrated to it. She just told the FBI she “realized she still had” the laptop and contacted PNR “on her own accord.”

The laptop was an Apple MacBook, Combetta told the FBI in a Sept. 15, 2015, interview. Hanley told the FBI she used the built-in email application on the laptop to access the emails. That suggests she archived them in the Apple file format, which would have been incompatible with the Microsoft Exchange system on the PRN server. There are generally two ways to solve such an incompatibility. One is to purchase a software that converts the archive’s format from Apple to Exchange. The other is to use a “dummy” account, such as Gmail. The emails are first copied from the Apple device to the Gmail account and then copied back into an Exchange mailbox.

Combetta told the FBI he used a “dummy” email to transfer the emails, then deleted the emails from the laptop, and mailed the laptop to Clinton’s office assistant.

He said he didn’t “wipe” the laptop, however, which leaves the possibility that the emails could still be recovered from the laptop’s hard drive.

“An analyst told us and FBI records show that the team sought and obtained records from multiple mail carriers in an effort to locate the Archive Laptop. Based on these records, the FBI was able to confirm that the laptop was delivered to Paul Combetta on February 24, 2014; however, the FBI found no records showing that Combetta mailed the Archive Laptop to Clinton’s office assistant as requested.”

The laptop is apparently still missing, but that still leaves the thumb drive.

The FBI “attempted to obtain” it from Hanley, “but she stated she could not recall what happened to it.” She told the FBI she may have given it to Clinton’s long-time aide Huma Abedin.

The thumb drive, it seems, is still missing today.

The IG and FBI didn’t respond to requests for comment.

Update: The article has been updated with further information from documents released by the FBI, the Office of the Inspector General, and Sen. Chuck Grassley (R-Iowa).

Correction: A previous version of this article incorrectly characterized whether the April 9 letter Inspector General Michael Horowitz sent to Sens. Chuck Grassley (R-Iowa) and Ron Johnson (R-Wis.) addressed whether the FBI probed who and when accessed the Gmail account “carterheavyindustries@gmail.com.” The Epoch Times regrets the error.