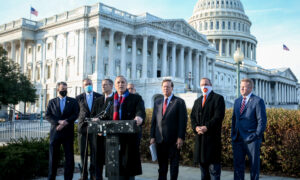 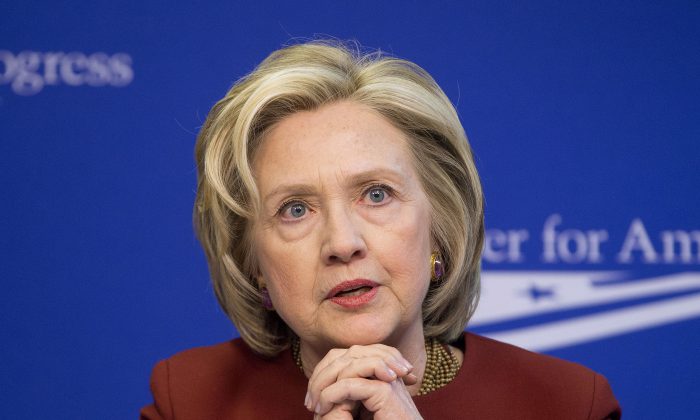 This file photo of March 23, 2015, shows former Secretary of State Hillary Rodham Clinton speaking at an event hosted by the Center for American Progress (CAP) and the America Federation of State, County and Municipal Employees in Washington. (AP Photo/Pablo Martinez Monsivais)
Politics

WASHINGTON—The Justice Department will have to decide whether Hillary Clinton or any of her subordinates could face legal consequences for her use of a private email server, a decision whose timing is fraught with serious political repercussions.

Even though Attorney General Loretta Lynch has said there is no “artificial deadline” for concluding the investigation, the Obama administration is in the unenviable position of conducting an election-year probe that, no matter the outcome or reassurances to the contrary, will result in grievances about its impact on the presidential election.

One year ago, The Associated Press reported its discovery of Clinton’s private email server, which she ran in the basement of her home in Chappaqua, New York, to use exclusively for her work-related emails while she was secretary of state. Clinton has emerged from the Super Tuesday primaries earlier this week as the presumptive Democratic nominee for the presidency.

Republican candidate Donald Trump has indicated he plans to target Clinton over the email investigations. Trump said Thursday he looked forward to running against Clinton, “assuming she’s allowed to run, assuming she’s not arrested for the email situation.” He added, “Let’s assume the Democrats will protect her.”

The FBI for months has investigated whether sensitive information that flowed through Clinton’s email server was mishandled. The State Department has acknowledged that some emails included classified information, including at the top-secret level, though Clinton has said she never sent or received anything that was marked classified at the time. The inspectors general at the State Department and the U.S. intelligence community are separately investigating whether rules or laws were broken.

“It will always be either too soon or too late,” said Stephen Vladeck, an American University law professor and national security expert who has followed the case. “The best the Justice Department can do is try to accept that there will be political noise no matter what, and try to figure out what makes the most sense from their institutional perspective.”

“Any political appointee is going to be sensitive to the electoral calendar,” he added. “The fine line is between being sensitive and being beholden to it.”

Lynch told the AP last month that the investigation involves career lawyers from the Justice Department and is being done independently and without regard for politics. She told Fox News this week that there was no “artificial deadline” for completing the investigation.

FBI Director James Comey declined to discuss the case with Congress during an appearance on Capitol Hill this week, saying only that he was very close personally to the matter “to ensure that we have the resources we need, including people and technology, and that it’s done the way the FBI tries to do it all of its work: independently, competently and promptly.”

The Washington Post reported Wednesday that the Justice Department has granted immunity to the staffer who set up the server, Bryan Pagliano, so that he would be willing to speak with investigators. A person familiar with the matter, who spoke on condition of anonymity in order to discuss an ongoing investigation, confirmed to the AP that Pagliano had been offered immunity “some time ago.” Pagliano had previously asserted his Fifth Amendment right against self-incrimination to refuse to answer questions from lawmakers investigating the server setup.

A spokesman for the Clinton campaign, Brian Fallon, said the campaign is pleased Pagliano is cooperating. Fallon said Clinton herself has offered to meet with investigators.

On Thursday, Republican Sens. Chuck Grassley and Ron Johnson, chairmen of the Senate Judiciary and Homeland Security and Governmental Affairs committees, respectively, asked the Justice Department for a copy of the immunity agreement.

Also complicating the timing of any decision or public announcement is the chance that Clinton or her former top aides could be deposed by private lawyers in coming weeks. A federal judge last week opened the door to such depositions as part of a lawsuit by Judicial Watch, a conservative legal group. It’s not clear what impact, if any, those interviews might have on the Justice Department investigation, but presumably federal agents would be interested in whatever Clinton or others say under oath.

There’s no question there are obvious political sensitivities. Though it’s extraordinary for a presidential candidate to be implicated in a federal investigation, there are instances of it happening to elected officials during campaigns.

The late Sen. Ted Stevens, R-Alaska., was indicted on ethics violations months before the 2008 election and found guilty just days before Election Day. He lost the race, and the Justice Department ultimately moved to reverse the conviction amid revelations of withheld evidence.

Former District of Columbia Mayor Vincent Gray was identified in court as having knowledge of an “off-the-books” shadow campaign during a campaign finance plea hearing for a local businessman weeks before the 2014 mayoral primary. Gray lost the election, but prosecutors never charged him.

Then-Attorney General Eric Holder directed in 2012 that “politics must play no role” in investigations or criminal charges, and said prosecutors should not choreograph criminal charges or investigations for the purpose of affecting an election. There is no bright line, but investigators ideally will look to conclude an investigation well before Election Day over concerns that a significant action could sway the outcome or at least have that appearance, said Justin Shur, a former Justice Department public corruption prosecutor.

While Lynch is technically correct there is no artificial deadline for resolving the Clinton investigation, Vladeck said the reality is more nuanced.

“That’s not the same thing as saying that external factors aren’t weighing in some of the calculus,” he said.