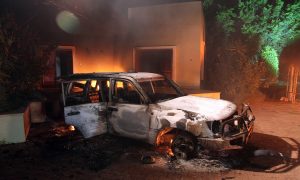 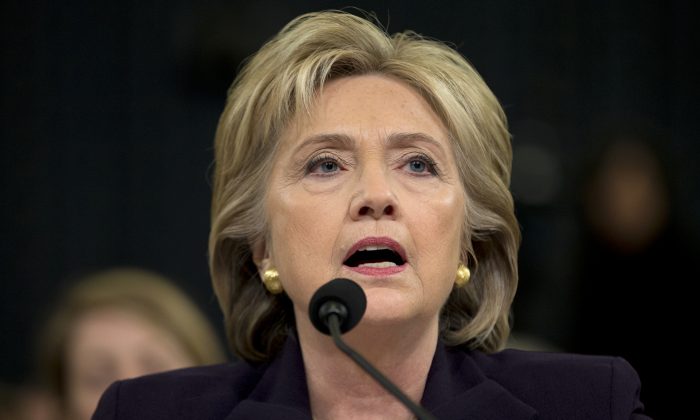 WASHINGTON—House Democrats are signaling they may quit a Republican-led committee investigating the 2012 Benghazi attacks after Hillary Rodham Clinton endured a grueling interrogation by GOP lawmakers at a marathon congressional hearing.

“We have learned absolutely nothing,” Rep. Adam Smith, D-Wash., a member of the panel, said of Thursday’s contentious 11-hour hearing and the 17-month investigation that preceded it.

Other Democrats, who had labeled the probe a partisan effort to undermine Clinton’s presidential campaign, echoed Smith’s complaint after the former secretary of state finished her testimony. More telling were comments by House Minority Leader Nancy Pelosi, D-Calif., who asked: “What’s next? Is this thing forever? Are they ever going to make a decision about whether to continue this?”

Pelosi has insisted, as she reiterated Thursday, “You have to be in the room to defend the truth.” With Clinton’s testimony concluded, that decision is likely to be revisited. Senior Democratic aides would not rule out the possibility of Democrats boycotting the panel, whose work likely will stretch into the election year.

Rep. Elijah Cummings of Maryland, the committee’s top Democrat,, said no decision has been made on whether Democrats boycott investigation.

Clinton had confrontational exchanges with several GOP lawmakers, but also heard supportive statements from Democrats. The questioning was, by turns, harsh and sympathetic, depending on who was asking.

Clinton firmly defended her record while steadfastly dodging any misstatement or display of anger that might damage her White House prospects. The most combative moments zeroed in on the Obama administration’s shifting initial accounts of the September 2012 attack that cost the lives of Ambassador Chris Stevens and three other Americans. But there were few specific questions about what transpired on that fateful day, Sept. 11, 2012, which Clinton said causes her to still lose sleep to this day.

The panel’s chairman, Rep. Trey Gowdy of South Carolina, said the committee was focused on the facts, not the politics of the situation, in the wake of recent comments by fellow Republicans describing his investigation as an effort to lower Clinton’s poll standings.

Democrats noted that the probe has now cost taxpayers more than $4.5 million and has lasted longer than the 1970s Watergate era investigation.

Gowdy said important questions remain unanswered: Why was the U.S. in Libya? Why were security requests denied? Why was the military not ready to respond quickly on the 11th anniversary of the 9/11 attacks? And why did the administration change its story about the nature of the attacks in the weeks afterward?

Gowdy called Thursday’s marathon session — with just a single witness, Clinton — “a constructive interaction.” But said he did not know whether the embattled panel gained credibility.

Cummings, who frequently guided Clinton though friendly questions, said he thought she “did an outstanding job.”

Clinton kept her cool throughout, but sparks flew briefly after Rep. Jim Jordan, R-Ohio, accused her of deliberately misleading the public by linking the Benghazi violence at first to an Internet video insulting the Muslim prophet Muhammad.

Clinton said that “some” people had wanted to use the video to justify the attack” and said she rejected that justification.

The Gowdy-Clinton exchange hit at the core of the protracted partisan feuding on Capitol Hill. Republicans said they were pressing hard to learn more about the manner in which President Barack Obama and his top aides characterized the attack.

For Clinton, the hearing offered opportunity and a potential for gaffes, as well, while affording her a high-profile platform to display self-control and a command of foreign policy. But it also left her vulnerable to claims she helped politicize the Benghazi tragedy.

“There were probably a number of different motivations” for the attack, Clinton said, describing a time when competing strands of intelligence were being received and no clear picture had emerged. Speaking directly to Jordan, she said, “The insinuations that you are making do a great disservice” to the diplomats and others involved.

“I’m sorry that it doesn’t fit your narrative,” she added. “I can only tell you what the facts were.”

There were no notable missteps by Clinton and, beyond her exchange with Gowdy, few heated interactions. She never raised her voice, as she had at a Senate hearing on Benghazi in January 2013, when she shouted, “What difference, at this point, does it make?”

Instead, it was the panel’s members who engaged in the nastiest moments, dueling one another about political motives, as Clinton looked on.