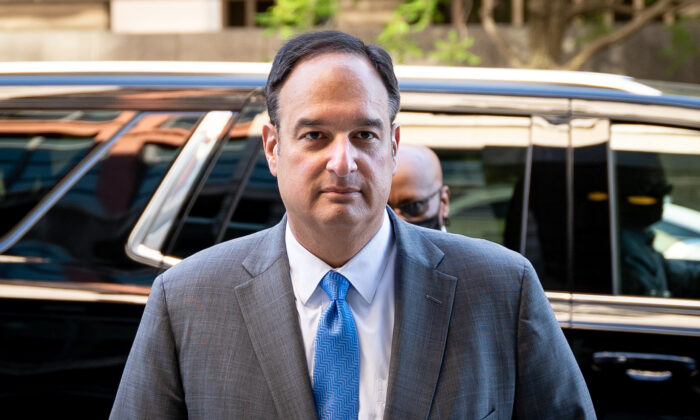 WASHINGTON—The Hillary Clinton campaign learned of claims regarding Donald Trump and Russia in the summer of 2016 and sought to get media outlets to report on the information, Marc Elias testified on May 18.

Elias said he was told by Michael Sussman, a fellow lawyer with Perkins Coie—the Clinton campaign’s law firm—about the claims, prompting Elias to share the information with others in the campaign in August 2016.

Elias, the campaign’s general counsel, said the campaign wanted to see the claims reported on in the press. “I thought that if there was a news account of the allegations,” it would “benefit the campaign,” he said.

Elias was testifying in federal court in Washington during the trial of Sussman, who allegedly lied to the FBI when he said that he was not bringing the allegations against Trump on behalf on any clients. Prosecutors allege he was acting on behalf of the Clinton campaign and Rodney Joffe, a technology executive who has said he was promised a position in a Clinton administration.

Billing records presented in court by Special Counsel John Durham’s team show Sussmann billing the campaign for thousands of dollars for “confidential meetings” with Elias and others. The records were for meetings starting July 29, 2016, and going through Aug. 19, 2016.

Sussmann handed over the data, which allegedly showed a link between Trump and Russia’s Alfa Bank, to FBI lawyer James Baker on Sept. 19, 2016, just weeks before Trump beat Clinton.

FBI experts quickly concluded that the information didn’t support the allegations and the CIA later found the claims not “technically plausible.”

Operatives with Fusion GPS, a firm hired and directed by Elias and paid by the campaign, attempted to seed stories about Trump and Russia in a range of news outlets before the 2016 election. Sussmann communicated with Eric Lichtblau, a New York Times reporter, and Franklin Foer, a Slate reporter, among others.

The New York Times and Slate on Oct. 31, 2016, reported on the claims. The former reported that the FBI examined the information and concluded there might be an innocuous explanation for it. Neither have been updated to reflect current information on the matter.

Prosecutors say the campaign’s efforts were aimed at influencing the election through an “October surprise.”

Also taking the stand on Wednesday was Baker, the former FBI lawyer.

Baker, now Twitter’s deputy general counsel, testified that Sussmann told him that he was not seeking a meeting on behalf of any clients.

Sussmann wrote that he had “something time-sensitive (and sensitive)” and that he was seeking a meeting the following day, but not on behalf of any clients. “I want to help the bureau, thanks,” he said.

Prosecutors revealed in April that they had obtained the text, but had not indicated how they got it.

Baker said he took a picture of the text on his phone and sent it to prosecutors.

“The way I thought about it, I’m not out to get Michael. This is not my investigation, this is your, investigation,” he said of prosecutors’ discovery request.

Baker ended up meeting with Sussmann a day later.

“I kind of wondered how [he] got my personal phone number but didn’t worry about it. He’s a friend. I trust him. I thought I should meet with him right away,” Baker said.

The former FBI lawyer came to know Sussmann when they worked in the same Department of Justice division, Baker has previously said.

Baker told members of a House of Representatives panel in 2018 that Sussmann “as a citizen providing information to the FBI about a matter that they thought had either to do with a crime or some national security threat,” which he said “did not seem inappropriate to me.”

Baker said he generally knew that Sussmann was involved with the Democratic National Committee (DNC).

On the stand on Wednesday, Baker recounted learning at some point in 2016 that Sussmann was representing Clinton or the DNC but believed that representation was in connection with cyber matters, “not with political issues.” Baker never pressed Sussmann on the sourcing for the data he conveyed, according to lawyers for Sussmann.

The Clinton campaign lawyer provided three white papers and associated data files that he claimed would substantiate the purported link between Alfa Bank and Trump, which federal investigators have found not to be the case.

Baker is scheduled to resume testimony on Thursday.