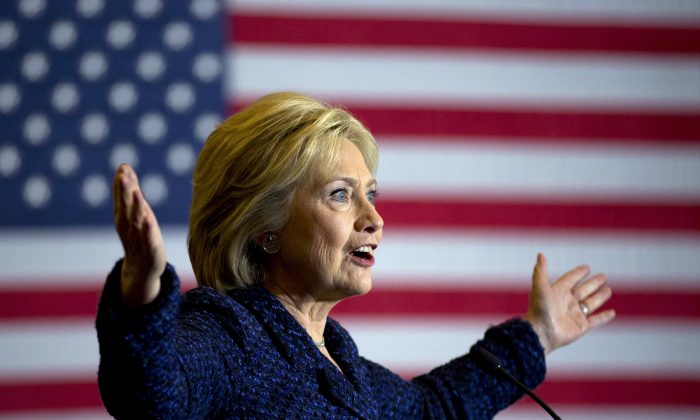 In this Jan. 21, 2016, photo, Democratic presidential candidate Hillary Clinton gestures while speaking during a rally on the campus of Simpson College in Indianola, Iowa. (AP Photo/Jae C. Hong)
Politics

The Democratic National Committee began the presidential election year almost $1 million in the hole — a bad situation that would have been even worse without the millions of dollars in fundraising that Clinton’s campaign sent its way.

That kind of assistance makes Clinton unique in the 2016 presidential field. No one else, Republican or Democrat, is raising money for his or her party at this early stage, including her Democratic rival, Sen. Bernie Sanders.

While that money would benefit Clinton should she capture the nomination, it comes with short-term complications. Already, Sanders allies have complained that the party favors her, pointing to the initial scarcity of debates as one example.

Clinton’s party fundraising fuels that argument, and reminds primary voters that she is part of the moneyed political establishment that Sanders frequently decries. Fundraising reports due Saturday will show how much Clinton continued to help the DNC in January.

DNC Chairwoman Debbie Wasserman Schultz has said the party is neutral in the primary and that she has a good relationship with both candidates in the race. She also said she feels “very confident” about the party’s finances, despite its debts.

Her party’s financial picture is especially dismal when compared with the Republican National Committee, which ended 2015 with about $17 million more in cash than debt.

Sanders, like Clinton, has a joint fundraising agreement with the DNC. So far it’s not being used. Tad Devine, his senior adviser, said Sanders is open to doing that sort of money-raising eventually.

But the way the two candidates are financing their presidential bids shows that raising money for the party is a much more natural fit for Clinton, a former first lady and second-time presidential hopeful.

Clinton counts more than 23,000 donors who have given her the legal maximum of $2,700. By contrast, Sanders has just about 600 such “maxed out” donors. Most of his money comes in far smaller increments.

In some ways, Sanders, a lifelong independent who declared himself as a Democrat only last year, more closely resembles President Barack Obama’s approach to fundraising. Both built their financial organizations largely apart from the party’s reliable funders.

While the president — the de facto leader of the DNC — has raised millions for the party, he has also undermined its importance.

After his re-election, the remnants of Obama’s campaign regrouped as a policy shop called Organizing for Action, which has been somewhat of a second DNC.

Enter Clinton, who has made her commitment to the Democratic Party a plank of her election bid.

“It’s time to rebuild our party from the ground up, and if you make me the nominee, that’s exactly what I’ll do,” Clinton told DNC members at their national gathering in August in Minnesota.

Clinton Aims to Reset Campaign With Focus on Black Voters

She has set about doing that through what’s called a “victory fund.” One of her events to raise money for the fund was a December concert with the rocker Sting in New York City.

Victory funds enable candidates to pool large amounts of money from a single donor. They work like this: An individual can give $2,700 for a candidate’s primary campaign, another $2,700 for the general election, $33,400 every year to the party and $10,000 per year to each state party.

Obama and 2012 GOP nominee Mitt Romney both used those fundraising devices in the last election, but they became even more powerful in 2014, when the Supreme Court struck down the cap on what any one donor can contribute each year.

Until the decision in that case, McCutcheon v. the Federal Election Commission, donors could give no more than a total of about $123,000 to federal political committees.

From Clinton’s victory fund, cash flowed into the DNC’s coffers in two ways: $2.3 million came directly from the fund itself and $1.5 million that first made stops at the state parties, and then got transferred to the DNC.