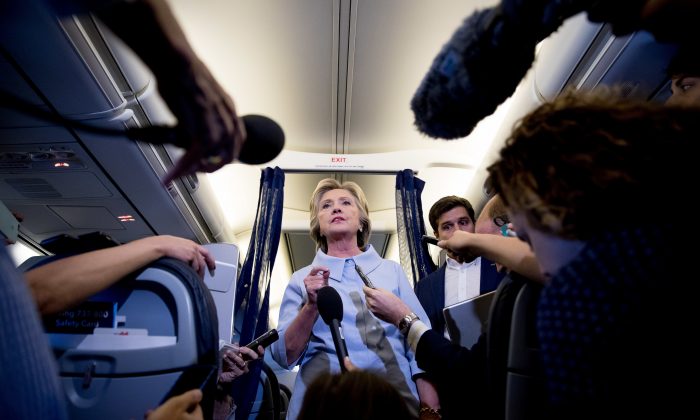 Clinton Addresses the Media After Long Void of Press Conferences

Democratic nominee Hillary Clinton addressed journalists traveling with her aboard her campaign jet as it flew from White Plains, New York, to campaign stops in Ohio and Illinois on Sept. 5.

Up until now, journalists assigned to cover Clinton had not been allowed to travel on her plane, which is customary for presidential candidates. Donald Trump has also not allowed journalists to travel with him by plane on a regular basis.

Clinton answered questions for over 20 minutes aboard the plane, after facing months of criticism for not giving a press conference since last December. The Clinton campaign has defended her track record on media availability by pointing to the over 300 media appearances she has made so far this year.

And while Clinton’s answering of questions aboard her campaign jet is similar to a press conference (although more traditionally referred to as a gaggle), she only spoke to a relatively small number of journalists assigned to cover her. This is different from a scheduled press conference where a larger number of journalists from a wider range of media have the opportunity to ask questions, critics say.

Over the past few months, Clinton has defended her track record when it comes to talking to the press, amidst other controversies. The candidate has faced questions about the FBI’s investigation into her handling of classified material, as well as newly released emails that show her connections to Clinton Foundation donors while she served as secretary of state.

During a phone interview with CNN’s Anderson Cooper on Aug. 24, Clinton, when asked whether she would soon be giving a press conference, emphasized that she was in fact talking to reporters.

“Well, Anderson, I’m talking to you right now,” said the former secretary of state. “And I’ve given, I think, way in excess of 300 interviews this year.”

A Press Conference or Not?

Lisa Lerer, national politics reporter for The Associated Press, wrote in a tweet at the time, “I would not exactly call a couple Qs from pre-selected journalists a press conference.”

In an interview with “CBS This Morning,” Clinton’s running mate, Tim Kaine, said he believed the NABJ-NAHJ appearance was a press conference.

“I don’t see what the massive difference is between a press conference and talking to the press everywhere you go,” he said. “She talks to the press a lot. And I’ve been with her when she has talked to the press.”

According to a count by NBC News, Trump has given 17 press conferences so far this year, excluding impromptu gaggles.

Confidants of the Democratic candidate told Politico in August that the Clinton team aims to “run out the clock” and “ride out” negative reactions to newly released emails that show Clinton Foundation staff set up State Department meetings for foundation donors while Clinton was in office.

He says that unlike Trump, who talks his way through his troubles, Clinton is a more disciplined communicator and should be able to address issues and move on.

“By not addressing them, though, they seem to percolate. It would appear that she is banking on the electorate being pretty polarized and mostly having their minds made up already,” said Holmes.

“Clinton has been in the spotlight for 25 years now, and most people have made up their minds,” he added.

James Campbell, distinguished professor of political science at the SUNY University at Buffalo and author of the book “Polarized: Making Sense of a Divided America,” due to be released this fall, said Clinton has to be more cautious. She cannot afford to make any gaffes like the “short-circuited” comment she made when talking about the FBI investigation, he said, and she must appear dignified while campaigning, not controversial.