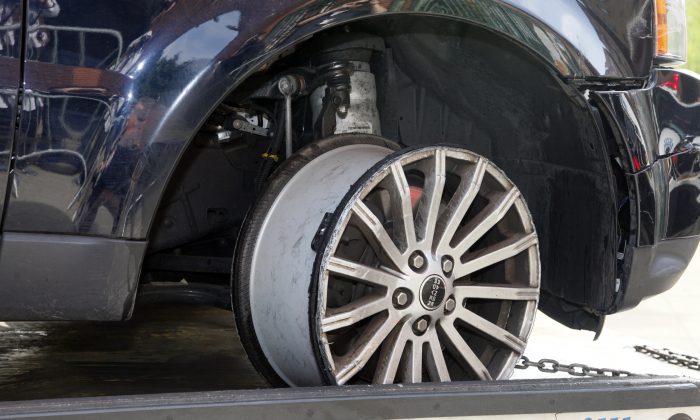 The Range Rover involved in the biker attack is being moved from the police precinct for further police investigation Saturday, Oct. 5, 2013 in New York. Last weekend, dozens of bikers stopped the Range Rover SUV on a highway, attacked the vehicle, then chased the driver and pulled him from the car after he plowed over a motorcyclist while trying to escape, police said. (AP Photo/David Karp)
Crime and Incidents

Clint Caldwell is the sixth biker to be charged in the Manhattan biker attack.

Caldwell, 32, of Brooklyn has been arrested on Tuesday for allegedly participating in the biker gang attack of SUV driver Alexian Lien.

It’s unclear at the moment the specific role he played in the attack.

It’s also unclear if he has a lawyer. There’s no phone listed for him at his Brooklyn address.

An undercover police officer was also arrested on Tuesday for his role in the attack, making him the fifth biker charged.

The encounter, captured partly on a helmet-mounted video that was posted online, began when about two dozen riders slowed down, swarming the Range Rover after it bumped a biker on the West Side Highway. Some riders dismounted and approached the SUV, and police said some bikers began damaging it.

Lien’s wife has said he feared for their lives and the safety of their 2-year-old daughter and had no choice but to flee; Lien hasn’t been charged with any crime.

The bikers pursued the SUV, which exited the highway and got stuck in street traffic. One biker used his helmet to shatter the driver’s window, and others pulled Lien out and beat and kicked him, police and prosecutors said. Lien needed stitches.

Five other bikers have been charged for allegedly having various roles in the attack. Much of the evidence has been gleaned from the video captured on the helmet camera. Police also interviewed witnesses in Washington Heights, the area that Lien was attacked.

The Manhattan district attorney’s office said prosecutors and police were “methodically scrutinizing the evidence to build the strongest possible cases.”

Christopher Cruz, 28, who initially slowed down in front of the SUV, has been charged with reckless endangerment.

Reginald Chance, 38, who reportedly can be seen in the video below smashing the driver’s side window of the SUV with his helmet, has been charged with gang assault, criminal possession of a weapon, and criminal mischief.

Robert Sims, 35, was arrested on Oct. 5 and has been charged with gang assault, weapons possession and other offenses.

Craig Wright, 29, was arrested at his Brooklyn home on Monday and charged with gang assault, assault, and unlawful imprisonment.

More people could be charged as the investigation continues.

Warning: This video is potentially disturbing.