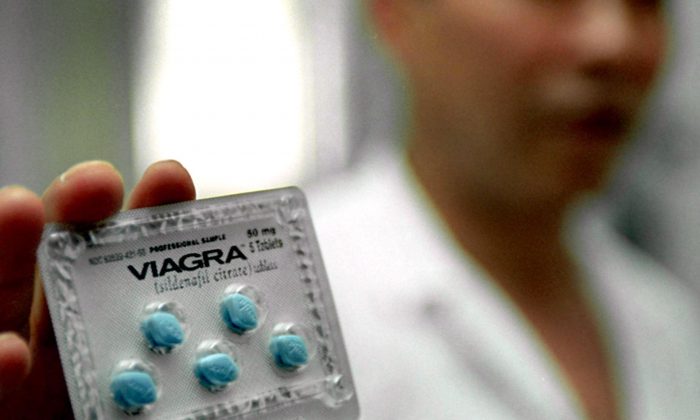 A file photo of a doctor showing the anti-impotence drug Viagra (Sildenafil Citrate) at a hospital in Shanghai in this file photo. (Liu Jin/AFP/Getty Images)
Europe

The deaths of 11 babies whose mothers were given sildenafil (SIL), commonly known as Viagra, during pregnancy as part of a clinical trial in the Netherlands, have sparked an immediate shutdown of the experimental treatment.

Medical researchers at the Amsterdam University Medical Center announced on Monday that the experimental study to evaluate the safety and effectiveness of the drug on unborn babies suffering from severe fetal growth restriction and who faced increased risk of being stillborn or dying after birth, would be brought to an end.

“Amsterdam UMC has immediately stopped a study into the effects and safety of the drug sildenafil (also known as Viagra), which was given to pregnant women whose babies had a severe growth restriction,” the medical facility stated on its website.

The women who participated in the study, which started in 2015, have been notified about the incident, the Amsterdam UMC stated.

“All participants were approached personally and almost everyone was informed and knows by now whether they have taken the drug or the placebo. All the women concerned are accompanied to the extent possible by the doctors involved in the study.”

Half of the 183 mothers in the trial had been treated with SIL, while the other half were treated with a placebo. At the time they were treated, the mothers did not know which treatment they were receiving—a standard practice in clinical trials.

According to Stanford Children’s Health, IUGR is a condition in which the fetus is smaller than expected for a number of weeks of pregnancy.

A number of factors are linked to the condition, including genetically predetermined growth potential, as well as maternal, fetal, placental, and external factors.

Over the years, there has been growing interest among researchers in using SIL in the treatment of a range of maternal and fetal conditions, including IUGR.

SIL, aka Viagra, is a drug approved by the Federal Drug Administration (FDA) and European Medicines Agency (EMA) for the treatment of erectile dysfunction and pulmonary hypertension in adults.

The hope in the UMC study, according to CNN-cited Dr. Mohan Pammi, medical director of the neonatal intensive care unit at Texas Children’s Pavilion for Women in Houston, who was not involved in the Dutch study, was that the drug “can open up some blood vessels in the placenta and then can help the growth of the fetus.”

A number of studies administering SIL during pregnancy have been carried out on animals, with mixed results.

A joint research project by scientists at the University of Manchester, University of Alberta, and University of Auckland, concluded that the use of SIL on mice test subjects increased placental and fetal weight.

Another study, referenced in the January 2017 issue of the American Journal of Obstetrics and Gynecology, involved sheep.

“We hypothesized that sildenafil would improve placental volume blood flow without any detrimental effects on fetal central hemodynamics during prolonged hypoxemia in a sheep model,” the researchers wrote.

The researchers concluded that fetuses with the SIL infusion had lower blood pressure during the recovery phase.

“This indicates that sildenafil can have potentially detrimental effects on fetal cardiovascular hemodynamics,” they wrote.

The Dutch researchers at UMC found that SIL was associated with the babies developing a blood vessel disease in the lungs and with an increase in the risk of death after birth. The condition can be likened to a type of high blood pressure in the lungs.

The further growth and development of the children in the stopped Netherlands study will be monitored and the data further analyzed, according to the medical center. This is likely to include scrutinizing the dosage and timing of administering the drug.

Low birth weight contributes to 60-80 percent of neonatal deaths worldwide, according to the World Health Organization.