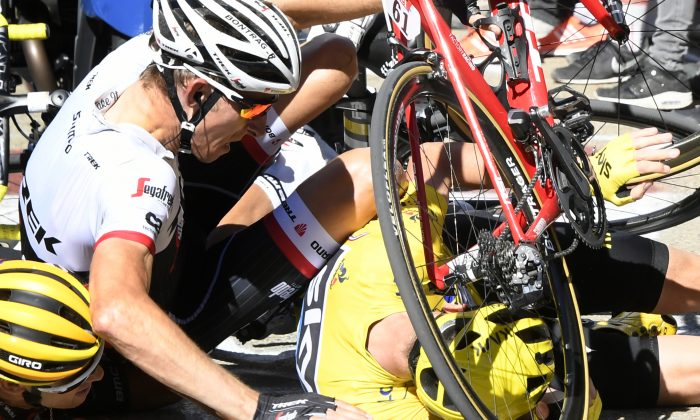 The final several hundred meters of the Stage 12 of the 2016 Tour de France will always be remembered, not for the tremendous battle between race leader Chris Froome  and his former team mate Richie Porte, not For Froome and Porte attacking and dropping pre-race favorite Nairo Quintana, not for the tremendous ride of stage winner Thomas DeGendt.

The final minute of the climb up Mont Ventoux will always be remembered as the day Sky’s team leader Chris Froome had to run up the mountain without a bike after a TV motorcycle caused a three-bike collision which sidelined the top General Classification contenders.

Race organizers decided to move the finish line six kilometers down the mountain because of 50-mph winds at the summit of Mont Ventoux, the original finish line. Apparently the organizers didn’t have time—or didn’t recognize the obvious need—to line the route up to the finish line with barriers to keep the crowd back.

Normally cycling fans are allowed are given unprecedented access to the riders—they line the route literally inches from the riders, reaching out or running beside the laboring riders as they struggle to climb mountains at racing speed. As a rule, the final kilometer at least of most stages are lined with barriers to keep the crowd from interfering with the action.

For some reason ASO, which organizes the Tour de France, only lined the last half-kilometer of the route up to the new finish line—despite the fact that tens of thousands of fans which would have been lining the top six kilometers of the route were packed into the final kilometer.

The stage had been anticipated as a site for a major battle among the race favorites, and the action on the road was certainly everything the crowd had anticipated. Movistar’s Nairo Quintana attacked twice but could not shake race leader Chris Froome of Team Sky. The Froome attacked—and attacked again, dropping Quintana with this second surge.

Richie Porte, for years Froome’s lieutenant at Team Sky before heading over to Team BMC for his own chance to lead a team, was the only rider who could stick on Froome’s wheel. This pair opened a gap, which Trek-Segafredo team leader Bauke Mollema soon bridged. This trio raced up the steep mountainside, knowing they were making decisive changes in the race order.

As is the case with modern cycling coverage, the three riders were surrounded by fans and vehicles; team cars from the riders which had gone ahead, motorcycles for TV and still photographers, and swarms of fans trying to cheear on their favorites and also to grab a few seconds of fame for being on TV.

The crowd, packed in too tight, blocked a TV motorcycle and forced it to stop just as Richie Porte launched an attack. Porte crashed hard into the motorcycle; Froome and Mollema hit the resulting tangle. A second motorcycle slammed into Froome’s bike, shattering the frame.

Mollema, being behind the other two, hit with the least impact and was the first to proceed. Chris Froome got up, found his bike to be damaged beyond riding, and took off up the mountainside on foot, probably too full of adrenaline to know what else to do and absolutely unwilling, unable to stand still and wait for help.

Eventually a neutral service car caught up to Froome and gave him a generic replacement bike, but it didn’t fit the race leader; he couldn’t even clip into the pedals.

Froome struggles upwards a few hundred meters more, but he could not safely ride; he had to pull over again and lay down the replacement bike.

Finally the Sky team car caught up and gave Froome a spare bike, but by that time he had already lost the yellow jersey and 53 seconds to his rivals.

ASO officials immediately huddled into an emergency conference, trying to figure which rules did or did not apply in this unusual but sadly not unprecedented situation. Shortly race officials released a new set of standings, based on telemetry showing where riders actually were on the road when the accident happened.

Chris Froome was allowed to keep the race leader’s yellow jersey, and Porte and Mollema were rewarded for their efforts.