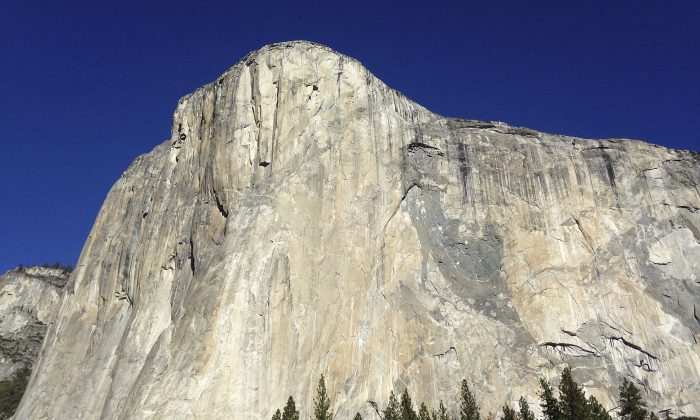 Shown is El Capitan where two climbers vying to become the first in the world to use only their hands and feet to scale a sheer slab of granite make their way to the summit Wednesday, Jan. 14, 2015, in Yosemite National Park, Calif. The pair are closing in on the top of the 3,000-foot peak and if all goes as planned, 30-year-old Kevin Jorgeson of California and 36-year-old Tommy Caldwell of Colorado, should complete their climb early Wednesday afternoon. (AP Photo/Ben Margot)
Sports

SAN FRANCISCO—Two climbers vying to finish the once-seemingly impossible challenge of scaling a sheer slab of granite in California’s Yosemite National Park without climbing aids are closing in on the top of the 3,000-foot peak.

Thirty-year-old Kevin Jorgeson of California and 36-year-old Tommy Caldwell of Colorado could reach the summit of El Capitan on Wednesday, said spokeswoman Jess Clayton. They had expected to finish the climb by early afternoon, but continued to scale the rock face as the day wore on.

Several dozen people, including relatives of the climbers, and about two dozen photographers, are gathered in the meadow looking up at the face, which is called the Dawn Wall.

“I feel like the most proud person in the world right now,” said Caldwell’s 39-year-old sister Sandy Van Nieuwenhuyzen. The Rochester, Minnesota, woman said she can’t wait to hug her younger brother. “I’m just going to hug. Just hug. No words necessary,” she said. “It’s such a big moment that a congratulatory hug is going to be very soothing to my big sister soul.”

They started on Dec. 27 and have been free-climbing, a technique that shuns climbing aids other than harnesses and ropes to prevent deadly falls.

The world has been watching the pair’s grueling half-mile journey up the peak’s Dawn Wall route. But Clayton says the men won’t give media interviews at the top. They plan to discuss the grueling climb Thursday.

Throughout the climb, both men have needed to take rest days to wait for their skin to heal. They used tape and even superglue to help with the process. At one point, Caldwell set an alarm to wake him every four hours to apply a special lotion to his throbbing hands.

They also took physical punishment when their grip would slip, pitching them into long, swinging falls that left them bouncing off the rock face. The tumbles, which they called “taking a whipper,” ended in startling jolts from their safety ropes.

Eric Jorgeson, Kevin Jorgeson’s father, told KGO-TV that his son has always been a climber and watching him fulfill a long-time dream makes him proud.

“He climbed everything he could think of. It made us nervous early on as parents, but we got used to it,” the father said. “It was more other parents saying, ‘Hey, your son is at the top of a backstop.'”

The two started climbing El Capitan (there are more than 100 routes to the top) when Kevin Jorgeson turned 15, and it has been a birthday tradition ever since.

Becca Caldwell, who is married to Tommy Caldwell, is also on the ground with their toddler son and has been blogging about her excitement as she prepares to reunite with her husband.