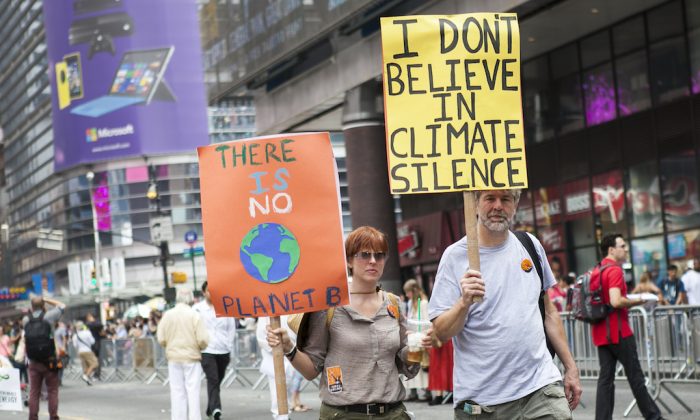 An estimate of more than 300,000 participated in the People’s Climate March in New York on Sept. 21, 2014. (Samira Bouaou/Epoch Times)
Climate Change

Climate change activists are unwittingly supporting one of the greatest moral travesties of our time: the valuing of people yet to be born more than those suffering today.

Rather than focus on helping vulnerable people adapt to real climate change in the present, activists concentrate on mitigation, trying to avert hypothetical events that may, or may not, someday happen.

Compounding the injustice, most climate campaigners oppose developing nations pulling themselves out of poverty through the use of their least expensive and most abundant energy sources: hydrocarbon fuels such as coal, oil, and natural gas. Instead, to help prevent future “climate disruption,” poor nations are supposed to use wind and solar power, energy sources even rich countries cannot afford.

Sunday’s climate change demonstrations across the world are cases in point. Hundreds of thousands of people took to the streets to demand that leaders take action to stop climate change. Perhaps the most ridiculous statement came from Drew Hudson, executive director of Boston-based Environmental Action, “We have all the tools and technologies we need to stop climate change.”

Humanity has absolutely no control over most of the factors that influence climate. Changes in our planet’s orbital and rotational parameters, the positions of the continents, the brightness of the sun, alterations in ocean currents, changes in cloud cover, even our position in the galaxy—all impact global climate. Today’s scientific debate centers around the degree to which humanity’s release of greenhouse gases are affecting one other component of the climate system—the natural heat trapping characteristics of the atmosphere.

No one really knows the answer to this question. Some scientists think our impact is major. Others say it is minor. Many assert that the science is simply too immature to know.

The reports of the Nongovernmental International Panel on Climate Change (NIPCC) cite thousands of peer-reviewed scientific research papers that demonstrate that much of what we thought we knew about climate is either wrong or highly debatable. Dr. Chris Essex, professor of applied mathematics at the University of Western Ontario, sums up the situation well: “Climate is one of the most challenging open problems in modern science. Some knowledgeable scientists believe that the climate problem can never be solved.”

And while the 90 million tons per day of carbon dioxide (CO2) emissions that Al Gore tells us is coming from man-made sources sounds like a lot, this is only a small fraction of the amount nature emits all on its own. Almost 10 times more comes from the consumption of terrestrial vegetation by animals and microbes (that is, rotting). Respiration by vegetation also emits almost 10 times that produced by human activities.

Similarly, depending on temperature and rates of phytoplankton photosynthesis, parts of the oceans release over 12 times as much CO2 as we do. Environmental consultant Dr. Tim Ball, former climatology professor at the University of Winnipeg, explains that the uncertainty in our estimates of CO2 emitted by oceans and decomposition of vegetation is greater than the total emissions of all human sources combined.

Regardless, the lack of global warming over the past 17 years, a period during which CO2 in the atmosphere has risen 8 percent, contradicts the models on which the climate scare is based. Yet climate campaigners assert that “the science is settled” and we know that our contribution to the “greenhouse effect” swamps all other climate drivers combined.

This common but unjustified belief is having a disastrous effect on climate programs across the world. The United Nations has said that funding for mitigation and adaptation efforts should be approximately equal. But the San Francisco-based Climate Policy Initiative uncovered that only 6 percent of the $1 billion per day spent on climate finance across the world is dedicated to adaptation. The remaining 94 percnet goes to mitigation, especially the development of expensive and unreliable alternative energy sources.

The financial reason for this is clear. Promoting mitigation is far more attractive to players who have motivations other than environmental protection or helping the poor: energy companies and carbon traders trying to maximize revenue, politicians wanting to increase taxes and control over their citizens, one-world government advocates, and so on. The “boots on the ground” approach typically required by adaptation initiatives does not so nearly fulfill the ulterior motives of these groups.

If we knew with absolute certainty that human-caused climate Armageddon lays just ahead, then the current mitigation to adaptation funding ratio might make sense. Millions of people would be left to suffer and die today so that billions would be saved in the future. Such an approach was espoused by 18th century British philosopher and social reformer Jeremy Bentham, the founder of modern utilitarianism. Bentham maintained, “It is the greatest good to the greatest number of people which is the measure of right and wrong.”

But, as the degree of certainty that a particular climate policy will significantly benefit future generations diminishes, the 94:6 funding ratio becomes less and less rational. Finally, if we knew with 100 percent certainty that a human-caused climate crisis was not in the cards, then it would be easy to justify that no money be devoted to mitigation at all. Aside from funding research so that someday we may be able to forecast climate change, all climate finance could then safely be devoted to helping vulnerable societies adapt to whatever may happen next.

In reality, we can never know the future of climate change with complete confidence, no matter what activists and politicians say. Uncertainty is inherent to all science, especially one as immature as understanding the Earth’s vast and complex climate system. This means that considering the probabilities of various alternative scenarios is critical to rational public policy decision making.

The U.N. Intergovernmental Panel on Climate Change does assess probabilities of course, although cherry-picking the science and empirical evidence to support its pre-determined conclusions. But even its uncertainties are never referenced in events like Sunday’s marches or most government pronouncements.

There is only one way out of this quandary. The sensationalism of U.N. agencies on climate change disqualifies them as reliable determinants of scientific opinion on the issue. It is therefore up to individual governments to do proper assessments themselves, convening unbiased and well-publicized hearings into the current state of the science, arranging for experts on all sides of the debate to testify.

Only then can our leaders undertake the risk management exercises necessary to properly balance the known needs of those suffering today with the possible problems to be faced by future generations.