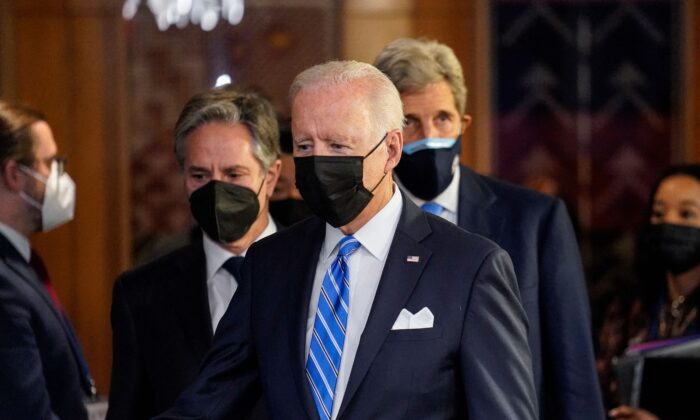 The Biden administration’s plan to impose a slew of financial regulations in order to counter climate change would end up having little effect on reducing global temperatures. But the measures would be quite effective at hurting the U.S. economy, expanding government authority, and moving the country toward totalitarianism, according to several experts.

President Joe Biden’s plan, sketched out in a recent “roadmap” White House report, would infuse climate change projections into decisions across the financial industry (pdf). Applying for a mortgage or other loans? The bank would consider the “climate risk” of underwriting it. Taking out an insurance policy? “Climate risk” would play into your premium. Putting money into a pension or investment fund? The fund managers would be free to consider “climate risk” in deciding where to invest your money. Buying stocks on your own? Public companies would need to divert part of their attention to explaining any “climate risks” they face. Applying for a government contract? Prepare to justify your carbon footprint.

In some areas, the administration combines climate change with a lineup of other issues. The Labor Department, for example, plans to allow pension fund fiduciaries to consider “ESG”—environmental, social, and governance—criteria in investment decisions. Aside from “climate-related financial risk,” such criteria would also include “racial and economic justice considerations” and “sustainability.”

Yet, estimating what changes in climate will or won’t cost a particular business years into the future is far from an exact science, the experts warn.

While many climatologists agree that Earth’s changing climate will cause serious damage to people, such as through more severe weather events, the scientific modeling that guides their warnings offers a broad range of estimates that are based on a number of assumptions. Economists then make further assumptions on how these scenarios from climate models could affect the economy, and how the economy would respond, followed by how the government would respond, and how the economy would respond to the government response, etc.

“The evaluation of such ‘risks’ would be largely arbitrary given that the ‘correct’ assumptions are very far from obvious,” Benjamin Zycher of the pro-market think tank American Enterprise Institute said in Senate testimony earlier this year.

If companies are to perform a serious evaluation of such risks, “the level of detail and the scientific sophistication that would be needed to satisfy such a requirement” would lead to reports spanning “thousands of pages, with references to thousands more” and would still end up “deeply speculative,” he said.

Companies would need to “develop climate modeling expertise, the ability to make macroeconomic projections based on these models, and then make firm-specific economic assessments based on these climate and economic models,” he said in a June letter to the Securities and Exchange Commission (SEC).

Meanwhile, government regulators would need to develop the capacity to police these disclosures. Currently, federal agencies engaged in financial regulation have nowhere near the expertise to tell genuine climate science from high-flown gobbledygook, both experts indicated.

“The premise that this ‘disclosure’ requirement would facilitate improved decision-making by investors in the financial sector is difficult to take seriously,” Zycher said.

Chances are that companies won’t actually try to genuinely guess what their risks from climate may be, he said.

“The Federal Reserve and financial institutions will be driven to adopt assumptions (or to retain consultants who will do so), minimizing the degree to which their analyses might subject them to political attacks, adverse regulatory actions, and litigation,” Zycher said.

Companies are likely to adopt whatever climate effect assumptions are endorsed by the government, such as through the Environmental Protection Agency (EPA), he said.

“They thus will be led toward analytic homogeneity, yielding a very real danger of an artificial ‘consensus’ among financial institutions, regardless of the actual evidence, and perhaps largely inconsistent with it,” he said.

The effects of all such efforts on climate, even in the most optimistic scenario, would amount to virtually nothing, he said.

“If we apply the Environmental Protection Agency climate model … net-zero U.S. GHG [greenhouse gas] emissions effective immediately would yield a reduction in global temperatures of 0.104 degrees C by 2100,” he said.

That’s not to say such measures would have no impact at all, however.

Cost of the Plan

Mandating all sorts of climate assessments would obviously cost money, the experts pointed out.

“There is little doubt that these costs will amount to billions of dollars,” Burton said. “The expenses associated with generating this verbiage will harm investors by reducing shareholder returns.”

The rules will produce a whole class of climate consultants and compliance specialists who will use part of their paychecks to lobby for a continuance of the rules, he said.

Public companies already have to disclose all facts “material” to their business, which means facts likely to affect a reasonable investor’s decision to act or not. If climate risks are indeed material, there’s no need for new rules as companies are already obligated to disclose them, Burton said.

“A requirement, whether formal or informal, that climate ‘risks’ be incorporated into the business decisions of financial institutions would weaken the materiality standard for disclosures by those institutions,” he said.

Such disclosures would further insulate management of public companies from responsibility—an area where they’re already coming up short, he argued.

“In large, modern corporations, there is a separation of ownership and control. There is a major agent-principal problem because management and the board of directors often, to varying degrees, pursue their own interest rather than the interests of shareholders,” he said.

So far, management can usually get away with its behavior as long as it has kept the company in the black. Mandating climate disclosures would enable them to use progress toward “largely unquantifiable” climate goals as an excuse for worse financial performance, he said.

The new rules also would be quite effective at making the government more totalitarian, several scholars noted.

“This is all about the application of political power,” said William Anderson, professor of economics at Frostburg State University in Maryland.

He told The Epoch Times that the policy of stripping the oil industry, in particular, of capital would cause further disruptions to supply chains and cause worsening inflation, depressing Americans’ standard of living. The government and political activists could then turn around and “blame capitalism.”

“It would take a while to turn the United States into Venezuela, but it can be done.”

Michael Rectenwald, former New York University professor and an authority on corporate socialism, predicted the ESG disclosures would serve to signal one’s ideological compliance, similar to how shop owners in socialist countries would plaster their stores with political slogans, as described in the famous essay “Power of the Powerless” by former Czech President Václav Havel.

“Either don the right symbolics (the party slogans, or in this case, ESG index score) or face the consequences,” Rectenwald told The Epoch Times via email. “Incidentally, this accords with my arguments regarding what I have called ‘corporate socialism.’”

“While approved corporate ‘stakeholders’ are not necessarily monopolies, the effect of the ESG index is the vesting of as much capital in these corporations as possible, while eliminating producers deemed either unnecessary or inimical. ESG scores work to eliminate competition.”

Despite the administration’s talk of helping underprivileged communities, some of the experts pointed out that large corporations are the best positioned to deal with such climate regulations.

“There is no doubt that these rules will have a disproportionate adverse impact on small issuers since regulatory costs do not increase linearly with size,” Burton told The Epoch Times via email.

Just as the administration proceeds to pour trillions of debt dollars into the climate effort, many of the largest corporations are predicting a windfall from the climate push.

A 2018 survey of Fortune 500 companies by the Carbon Disclosure Project (CDP) found that the 81 U.S. companies that provided financial estimates expected a total of less than $56 billion in physical losses from climate change, such as from more severe weather. They estimated another more than $54 billion in losses from “transition risk,” such as government regulations and changes in consumer behavior. Yet, they expected more than $450 billion in climate-related “opportunities.” Even fuel companies predicted they’ll end up net beneficiaries of the climate push (pdf).

Some experts indicated that it’s not just the specifics of Biden’s plan, but the whole idea of fighting climate change through government fiat that is misguided.

The government has a poor track record of addressing long-term problems such as climate change, said Mark Thornton, an economist with the classical liberal Mises Institute.

“These are types of issues which are wholly unsuited to the political process,” he told The Epoch Times. “The market is really best suited to deal with this.”

He referred to an upcoming research paper looking at energy efficiency developments that show “the inducement to energy efficiency was started with the oil crisis” of the 1970s and organically produced “very significant technical efficiency because it’s aimed at economic efficiency,” he said.

On the other hand, he said, the paper shows that “shorter-term mandates have not been effective—that you’re putting in too many resources to get the types of results that you’re really trying to generate.”

“How does the government work? It sets deadlines. It says, ‘OK, by this year, we’re going to have this. We’re going to start moving resources this way.’ Well, economies don’t work like that.”

It may be that electric cars, for example, will become cheaper than gas-powered ones, but it’s very expensive to push technology forward by mandate, Thornton noted. In fact, the mandate may redirect resources from a plethora of other innovation avenues that may offer an altogether different solution to cleaner transportation.

Government intervention also tends to work differently in practice than on paper, Thornton pointed out.

“Once you get these things started, we don’t know where they go, except they typically get worse,” he said.

The National Flood Insurance Program, for instance, was supposed to discourage people from building houses in flood-prone areas. In reality, it often does the opposite, subsidizing flood insurance for people who decide to live in a flood zone, according to a report by the left-leaning Brookings Institution. The government has spent tens of billions over the program’s existence since 1968, in major part to provide cheap flood insurance to well-off homeowners in coastal areas. A quarter of the explicitly subsidized policies went to vacation homes, one study found.

The same pitfalls would apply to attempts to plan the economy around the climate goals, Thornton suggests.

“We don’t have enough knowledge or information to know how all these things are going to work out.”

Biden’s climate finance plan “is a monument to that ignorance,” he said.