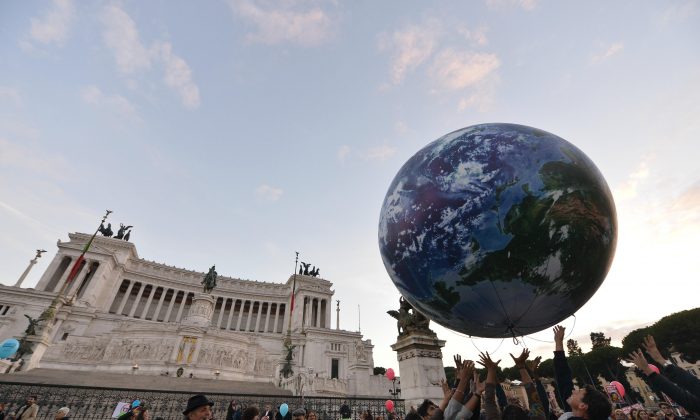 People play with a giant balloon representing Earth at Piazza Venezia during a rally calling for action on climate change on Nov. 29, 2015, in Rome a day before the launch of the COP21 conference in Paris. (Tiziana Fabi/AFP/Getty Images)
International

PARIS—The latest from the much-anticipated U.N. climate conference that gets underway in Paris on Monday (all times local):

France’s interior minister says that 208 people were detained after clashes with riot police on the eve of the start of a critical climate conference, and that 174 of them were being held for possible charges.

French President Francois Hollande said the violence on Sunday was “scandalous” both because the clashes were caused by “disruptive elements” that have nothing to do with environmental defenders and because the Place de la Republique has been a memorial square for the 130 victims of the Nov. 13 Paris attacks.

“These individuals have no place and that’s why everything will be done to move them aside,” Hollande said from Brussels.

As he left for the climate conference in Paris Sunday, Obama wrote a Facebook that the U.S. has shown it’s possible to make environmental gains while creating jobs and expanding the economy.

Obama will try to reassure world leaders in Paris that the U.S. can deliver on its own commitments.

He says the goal in Paris is a long-term framework for more global reductions, with each nation setting targets that other countries can verify.

He says leaders will try to support “the most vulnerable countries” in expanding clean energy and “adapting to the effects of climate changes that we can no longer avoid.”

A well-known climate pressure group took its distance from a violent demonstration in Paris, saying the protesters were “unaffiliated with the climate movement.”

There were at least 100 arrests after the clash between riot police and groups of protesters, some wearing masks, but no injuries, police chief Michel Cadot said.

On the eve of a climate conference, protesters threw glass bottles and even candles at police in the Place de la Republique, after two peaceful demonstrations earlier in the day in response to a ban on marches due to France’s state of emergency imposed after the Nov. 13 attacks.

In a statement, the climate group 350.org said that the violent protesters violated the “nonviolent pledge that every group involved in the climate coalition” agreed to.

The statement expressed hope that France wouldn’t clamp down further on freedoms during the conference following the incident.

Climate change negotiations in Paris have started with a moment of silence and commemoration for the victims of the attacks in the French capital.

Negotiations started at 5 p.m. local time Sunday in Paris. After the moment of silence, Peruvian environment minister Manuel Pulgar-Vidal, who headed last year’s negotiations, said a climate agreement is a good way to overcome the horrors of the Paris attacks.

French Foreign Minister Laurent Fabius, president of the Paris conference, said the goal is an ambitious agreement that all countries can agree on.

“I am confident that you will be able to retrieve a good result,” Fabius told negotiators. “Every day we have to make progress. No subject shall be left aside.”

He said negotiators owe it to the world to finish negotiations in an orderly time frame.

The Paris police chief says that about 100 people have been detained after a protest seeking a global climate deal turned violent.

Michel Cadot told reporters that police identified about 200 or 300 people who violated a ban on all protests under the country’s state of emergency. The state of emergency was declared because of recent extremist attacks that killed 130 people in Paris.

Cadot said Sunday about 100 people who were found to have projectiles or other suspicious objects were detained.

Police fired numerous rounds of tear gas on protesters to disperse them.

The protesters were gathering ahead of critical global warming talks outside Paris.

A Glossary for UN Climate Talks

In an interview on the eve of a U.N. climate summit in Paris, Ban told The Associated Press he has endorsed plans for reviewing targets every five years.

“I would propose that the first such review session should be held before 2020,” Ban said.

Thousands of people are marching through London, urging world leaders not to blow their chance to take strong action on climate change.

Corbyn told the crowd that the talks were “an enormous opportunity” to tackle “pollution, climate change, inequality, environmental refugees, war refugees and resources wars. If we are to make a real difference in Paris, all these issues have got to be thought about and addressed.”

Thompson said that climate change, once seen as a fringe cause, was now “the issue of the 21st century.”

Events are taking place around the world on the eve of the Paris talks.

Numbers at the London march from Hyde Park to the Whitehall government district were swelled by a ban on a protest march in Paris in the wake of Nov. 13 attacks by Islamic extremists that killed 130 people.

Police fired tear gas and clashed with demonstrators on Paris’ Place de la Republique square in an early test of the authorities’ determination to ban public demonstrations during the international climate negotiations.

Thousands of demonstrators gathered in central Paris Sunday and formed a human chain along the route of a long-planned protest march that was banned by France’s Socialist government in a security crackdown following attacks by Islamic extremists earlier this month.

In mid-afternoon scuffles broke out between riot police and protesters on the Place de la Republique, where Parisians have gathered to place flowers in remembrance of the 130 mostly young victims of the Nov. 13 attacks.

Multiple sources have told The Associated Press that countries, high-powered companies and business leaders will announce an effort Monday to put tens of billions of dollars toward clean energy technology to fight climate change.

A French source who was not authorized to speak publicly said French president Francois Hollande will attend the event they call the “Clean Tech Initiative” that is going to be launched by Microsoft founder and philanthropist Bill Gates in the presence of U.S. President Barack Obama. The source said France, the U.S., India, South Korea, Saudi Arabia, Australia, Canada and Norway have already decided to participate in the “ambitious” project that will aim at developing clean energies.

Two other sources, including a former U.S. White House official familiar with the initiative, said the amount of money involved, from countries, companies and individuals would be in the tens of billions of dollars. The money would be geared toward research and development of technologies, such as energy storage that could make clean power from wind and solar more usable regardless of weather vagaries.

According to an early draft of the initiative, which at the time was called “Mission Innovation,” governments participating were pledging to double their clean energy research and development spending in the next five years.

The Commonwealth—a grouping of Britain and many of its former colonies—covers more than 2 billion people. Its members include industrialized economies such as Canada and Australia, resource-hungry India and small island states vulnerable to rising sea levels.

At a biennial summit in Malta, Commonwealth leaders called for developed countries to spend $100 billion a year by 2020 to “help developing countries implement plans for adaptation and mitigation.”

The United States has cast doubt on whether an agreement reached in Paris would be legally binding. Secretary of State John Kerry said this month that there were “not going to be legally binding reduction targets” agreed at the meeting.

Environmental and other activists are lining up shoes on Paris streets and holding a healing ceremony to urge world leaders to reach a deal to slow climate change.

A big activists’ march Sunday was banned because of a state of emergency imposed in France after Nov. 13 extremist attacks that killed 130 people.

Instead, environmental groups are holding marches outside France this weekend, and some activists lined up shoes on the Place de la Republique square to represent the people barred from protesting.

Tribal leaders from different indigenous groups around the world are also planning a healing ceremony Sunday near the site of the Paris attacks.

They are urging leaders gathering for U.N. climate talks near Paris Nov. 30-Dec. 11 to agree to deep emissions cuts and to help poor countries cope with global warming.

More than 140 world leaders are gathering in Paris for high-stakes talks seeking a long-term deal to slow man-made global warming.

U.N. Secretary-General Ban Ki-moon is meeting French President Francois Hollande on Sunday morning to discuss the talks, and U.S. President Barack Obama is among scores of other leaders arriving for the talks.

The Nov. 30- Dec. 11 U.N. climate conference is under extra-high security after extremists killed 130 people around Paris earlier this month.

Negotiators from 196 countries are seeking an accord that reduces man-made emissions to limit rising sea levels and increasingly extreme weather that is already threatening populations around the world.