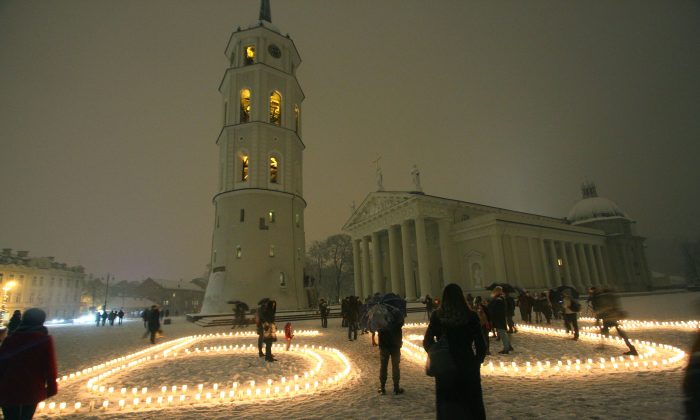 People attend a candle light vigil at the Vilnius Cathedral as it stands unlit during Earth Hour in Vilnius on March 19, 2016. Lights went off in thousands of cities and towns across the world for the annual Earth Hour campaign, aiming to call for action on climate change. (Petras Malukas/AFP/Getty Images)
Opinion

Public opinion polls are regularly cited by politicians and activists to support government action on climate change. Yet these surveys rarely make meaningful contributions to the public policy debate since they ask about issues that do not matter, while ignoring issues that do matter.

Happily, most polling companies have matured to the point that they no longer ask respondents whether they think ‘climate change is real’ or whether they believe there is a scientific debate about the causes of climate change. Public understanding of the inevitability of climate change on a dynamic planet and the massive uncertainty about future climate states has rendered such questions pointless.

Yet pollsters still have a long way to go before their climate change surveys should be taken seriously.

Gallup’s annual environmental poll, the results of which were released throughout March, is a case in point.

It does not matter whether Americans have heard that “scientists recently reported that 2015 was the Earth’s warmest year on record,” as Gallup misleadingly informed respondents in the preamble to one of its survey questions. While some scientists say 2015 temperatures were exceptional, many others do not. They understand that, due to the uncertainties in the early part of the record, no one knows if temperatures today are higher than in earlier decades.

But the issue is irrelevant anyways. What difference does it make if one year exceeded the previous warmest year by hundredths or even tenths of a degree? Changes of that magnitude are not noticeable in the real world and appear only after complicated manipulation of the data.

Similarly, Gallup’s question about whether Americans “generally believe these reports [about 2015’s supposed record] are accurate or not accurate” has no bearing on public policy formulation. The accuracy of computations of trivial changes is obviously unimportant.

Gallup asked respondents about the causes of the supposed “record temperatures in 2015.” Again, aside from scientists working in the field, who cares? The reasons for such tiny variations are not relevant to policy discussions.

The question that does matter is:

Will emissions of carbon dioxide (CO2) from human activities cause dangerous global warming and other climate problems in the foreseeable future?

It is only future climate changes that should be of concern to policy makers. The past is history. We cannot change it.

And for the issue to be worthy of public debate, let alone a billion dollars a day, the amount now spent around the world on climate finance, any forecast temperature rise would have to be expected to be dangerous.

Even then, we would have to know, with a reasonable degree of confidence, that such warming, if it occurs, will be as a result of our CO2 emissions. The issue at hand is not a generic “human-caused climate change,” one of the possible answers provided by Gallup in its survey. The debate, and indeed the subject of the Obama administration’s Clean Power Plan (CPP), concerns one particular type of human-caused climate change, namely that supposed caused by our CO2 emissions.

Of course, the answer from most of the public to the above hypothetical poll question would have to be, “I don’t know.” How could they? Even the world’s leading scientists don’t really know the answer. “Climate is one of the most challenging open problems in modern science,” according to University of Western Ontario applied mathematician Dr. Chris Essex, an expert in the mathematical models that are the basis of climate concerns. “Some knowledgeable scientists believe that the climate problem can never be solved.”

A question that would make sense to poll Americans on would be:

How much are you prepared to pay in increased taxes and other costs to reduce America’s CO2 emissions to encourage other countries to follow suit so as to possibly avert dangerous climate change that may someday happen?

That is the real question. After all, Environmental Protection Agency Administrator Gina McCarthy has admitted that plans such as the CPP will have no measurable impact on global climate. She has repeated informed Congressional hearings that the purpose of the CPP is to set an example for the world to follow.

Science Relies on Computer Modelling—so What Happens When It Goes Wrong?

But developing countries, the source of most of today’s emissions, have indicated that they have no intention of limiting their development for ‘climate protection’ purposes. In fact, all United Nations climate change treaties contain an out clause for developing nations so that they need not make reductions if it interferes with their “first and overriding priorities” of development and poverty alleviation.

Most people would pay nothing at all to support an improbable hope that other countries follow America to possibly avert a hypothetical future problem. But pollsters have never asked the public about this important issue. It’s about time they did.