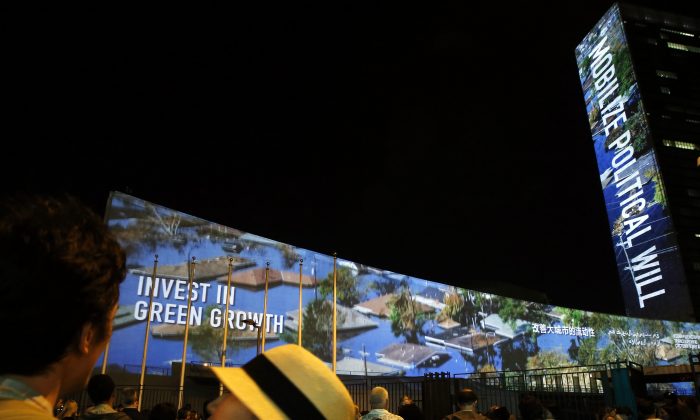 A crowd gathers outside as an architectural light show entitled illUmiNations: Protecting Our Planet, designed to inspire action on climate change, is projected on the side of United Nations headquarters Saturday, Sept. 20, 2014. (AP Photo/Jason DeCrow)
US

NEW YORK—The U.N.’s annual general assembly meeting in New York City will be preceded this year by the U.N. Climate Summit. The summit will draw leaders from the worlds of finance, business, government, civil society, and even the entertainment industry on Sept. 23. President Barack Obama will also attend and join more than 120 other world leaders in a display of international political support for a global climate treaty, due by the end of 2015.

Leaders from China and India will not attend.

Later that day, Obama will also speak at the annual meeting of the Clinton Global Initiative, where he plans to discuss the need to strengthen civil society across the globe.

The one-day Climate Summit, convened by U.N. Secretary-General Ban Ki-moon, will focus on the need for international action to arrest rapid climate change. It will follow more than a week of events that culminated in the People’s Climate March in Manhattan on Sunday that drew nearly 310,000 people, according to the organizers.

The White House last week said it is looking forward to the meeting and the chance to find solutions to reduce factors that are believed to cause climate change and carbon pollution. Others who will take part in the summit include New York City Mayor Bill de Blasio, former U.S. Vice President Al Gore, and actor Leonardo DiCaprio—who is also a U.N. Messenger of Peace.

Over the weekend, New York became the largest city to pledge to reduce greenhouse gas emissions by 80 percent by 2050. The plan includes retrofitting every city building with significant energy use—about 3,000 buildings—to reduce contributions to climate change and save taxpayer money. About 75 percent of the city’s greenhouse gas emissions are produced by energy used to cool, heat, and power buildings, according to the city. De Blasio also said in a statement that his plan will also create thousands of jobs.

New York City’s plans fall squarely in line with a main goal of Tuesday’s Climate Summit, which is for action at the ground level that will lead to reduced emissions. The summit is aimed at building support for a global climate treaty to be finalized next year in Paris, which summit organizers hope will help limit the world to a 2-degree Celsius rise in global temperature.

Limiting warming to that level would require huge reductions in carbon dioxide pollution in the near future, but some fear that countries will not offer nearly enough reductions next year to prevent temperatures from reaching the point where the changes brought about by climate change would be catastrophic.

“We are behind schedule, but we still do have time — just,” former Vice President Al Gore said in an interview with The Associated Press.

While not part of the formal negotiation process, the summit is the pinnacle of the 7-year-old tenure of Secretary-General Ban Ki-moon, who has made fighting climate change his rallying cry and traveled the globe to personally invite world leaders to the gathering. Saying he was “humbled by the overwhelming response,” Ban urged leaders to come with bold ideas.

The U.N.’s annual General Assembly meeting begins the following day, on Sept. 24, and runs through October. The General Assembly meeting, which will be attended by President Barack Obama, will cover a wide range of topics including weapons in outer space, and global health and foreign policy. Obama plans to address the gathering on the Ebola crisis.

Individual nations and the U.N. will announce new commitments to fight the outbreak in West Africa. Last week, Obama ordered 3,000 U.S. military personnel to the region to deal with the outbreak. The U.S. expects other countries to offer money, equipment and personnel, and make pledges to build treatment units for Ebola victims. The president will also have a series of bilateral meetings with foreign leaders on the sidelines of the U.N. General Assembly.

The Holy See and the State of Palestine will both have observer status.

Topping the international community’s agenda as world leaders gather in New York is the threat posed by Islamic State group extremists who have seized about one-third of Syria and Iraq. Obama plans to call on fellow world leaders to back a United Nations resolution calling on nations to stem the flow of foreign fighters joining terrorist organizations like the Islamic State, as the United States seeks to build legitimacy for its military campaign in Iraq and Syria, the White House said Friday.