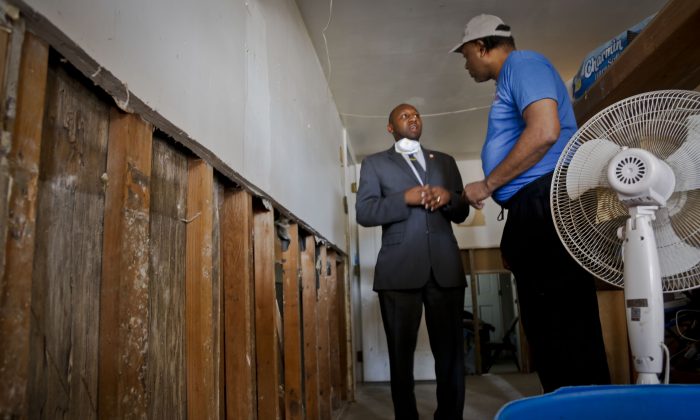 City Councilman Donovan Richards with a victim of Superstorm Sandy on May 7, 2013. Richards spoke at the final preparation meeting for the People's Climate March on Sept. 10, 2014. (AP Photo/ Bebeto Matthews)
New York

NEW YORK—City Council recognized climate change as a danger to humans, by passing a resolution on Wednesday.

Resolution 356 was introduced in July by Councilman Donovan Richards. The council resolved it by acknowledging “the dangers of climate change to human health and the environment.”

At 6 p.m. on Wednesday, a few blocks away from Columbus Circle, in the New York Society for Ethical Culture, hundreds of people gathered for the final organizing meeting in preparation for the massive climate march coming on Sept. 21.

Stephanie Low, who works in music, said that she wanted to change the environment for her daughters, so that the Earth would still be there for them to live on. “If it continues like this, will there even be bugs left?”

An advertisement for the People’s Climate March on the 1 train, in Manhattan, New York on Sept. 10, 2014. (Shannon Liao/Epoch Times)

Each attendee received a Trader Joe’s bag containing many flyers to hand out and a stack of newspapers on their chairs.

Many panelists at the event spoke about the devastation wrought by Sandy, and Efleda Bautista, a leader for typhoon victims, said that the upcoming march would also be for the Philippines where Typhoon Haiyan struck late last year.

Labor unions and environmental groups said Wednesday they expect a huge turnout at the New York City march, which is taking place two days before a United Nations summit on the issue.

One of the groups organizing the event, 350.org, aims to convince companies to divest from fossil fuels, help decrease the country’s carbon footprint, and decrease the amount of CO2 in the atmosphere from 400 parts per million to under 350 parts per million, even naming their organization 350 after that cause.


Organizers of the New York event—called the People’s Climate March—said similar actions will take place Sept. 21 in other cities, including Rio de Janeiro and Lagos, Nigeria.

“Hundreds of thousands of people from around the nation will descend on New York City streets to let our leaders know that we can no longer turn a blind eye to this crisis,” Councilman Richards said at a rally on the steps of City Hall.

He predicted the demonstration would be the largest climate march in history.

Richards also said he hopes to never see another Superstorm Sandy, which devastated his district in the Rockaways section of Queens.

“Unfortunately, the reality is that if we don’t start to address global warming, I predict we will see another Sandy in our lifetime,” Richards said.