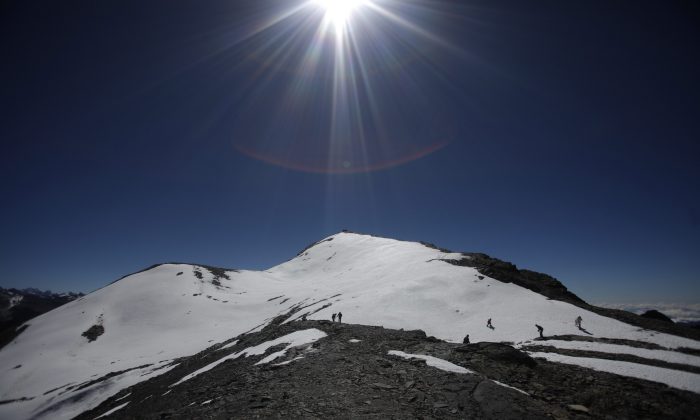 In this June 12, 2011 file photo, people walk along the Cordillera Real of the Andes mountains on the outskirts of La Paz, Bolivia. According to the Environmental Defense League, a Bolivian NGO, Bolivia's glaciers along the Cordillera Real, Chacaltaya, Tuni Condorini and Illimani are shrinking in size by more than one meter every year and estimate that the majority of the snow in this area could disappear by 2030. A scientific assessment by the U.N.’s expert panel on climate change warned that rising global temperatures could have an irreversible impact on people and ecosystems as glaciers melt, sea levels rise, heat waves intensify and oceans become warmer and more acidic. (AP Photo/Juan Karita)
Environment

An opinion piece published in the Telegraph that alleges climate change is the “biggest science scandal ever,” incensing some environmentalists.

Christopher Booker, who primarily does pieces  on EU topics but, writes in a heavily shared Daily Telegraph article: “When future generations look back on the global-warming scare of the past 30 years, nothing will shock them more than the extent to which the official temperature records – on which the entire panic ultimately rested – were systematically ‘adjusted’ to show the Earth as having warmed much more than the actual data justified.”

Booker has made similar claims in the past. His claims have been derided by environmentalists.

RL Miller, with the California Democratic Environmental Caucus, hit back at Booker, tweeting, “wait, all of climate change is a hoax because Some Dude With A Blog found some goof re 3 weather stations in Paraguay?”

“Someone should tell the Arctic ice cap that its been shrinking by mistake,” wrote another.

It’s worth noting that last month, the U.S. Congress approved an amendment to the Keystone XL pipeline bill. The amendment says “that climate change is real and not a hoax.”

And the U.S. Environmental Protection Agency has long insisted that climate change is real. ” Earth’s average temperature has risen by 1.4°F over the past century, and is projected to rise another 2 to 11.5°F over the next hundred years. Small changes in the average temperature of the planet can translate to large and potentially dangerous shifts in climate and weather,” says the EPA.

The EPA cities more evidence than just global temperatures  to make the claim that climate change is real. “Many places have seen changes in rainfall, resulting in more floods, droughts, or intense rain, as well as more frequent and severe heat waves. The planet’s oceans and glaciers have also experienced some big changes – oceans are warming and becoming more acidic, ice caps are melting, and sea levels are rising,” the agency says.

But don’t tell that to Booker, who adds: “I wrote about Paul Homewood, who, on his Notalotofpeopleknowthat blog, had checked the published temperature graphs for three weather stations in Paraguay against the temperatures that had originally been recorded. In each instance, the actual trend of 60 years of data had been dramatically reversed, so that a cooling trend was changed to one that showed a marked warming.”

In a January 2015 article, he elaborates more on what Homewood found:

Noting that weather stations there were thin on the ground, he decided to focus on three rural stations covering a huge area of Paraguay. Giss showed it as having recorded, between 1950 and 2014, a particularly steep temperature rise of more than 1.5C: twice the accepted global increase for the whole of the 20th century.

But when Homewood was then able to check Giss’s figures against the original data from which they were derived, he found that they had been altered. Far from the new graph showing any rise, it showed temperatures in fact having declined over those 65 years by a full degree. When he did the same for the other two stations, he found the same. In each case, the original data showed not a rise but a decline.

Homewood had in fact uncovered yet another example of the thousands of pieces of evidence coming to light in recent years that show that something very odd has been going on with the temperature data relied on by the world’s scientists. And in particular by the UN’s Intergovernmental Panel on Climate Change (IPCC), which has driven the greatest and most costly scare in history: the belief that the world is in the grip of an unprecedented warming.