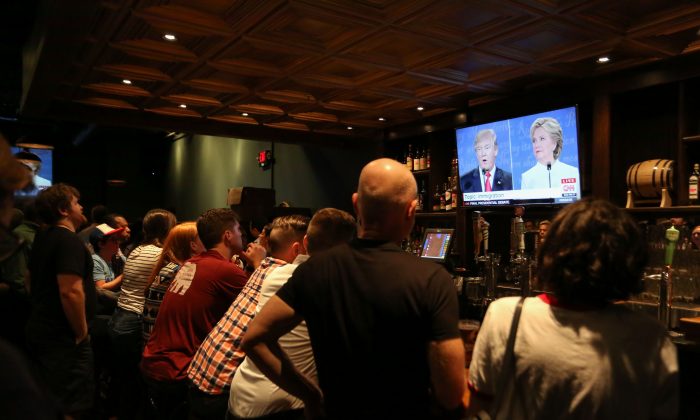 Climate Change Had No Place in Presidential Debates

Environmental activists and their supporters in mainstream media are appalled that not a single question in the presidential debates focused on climate change.

Writing for The New York Times, David Leonhardt called it “a failure of journalism … the lack of a single question on the world’s biggest problem was a grievous error.”

May Boeve, executive director of climate group 350 Action, complained in The Guardian (U.K.), “This crisis threatens our communities, our economy, and the future for our children … yet climate change doesn’t get a single direct question in the debate.”

Baltimore Sun editorial staff identified those they consider responsible: “Shame on the various moderators for not insisting that Mr. Trump and former Secretary of State Hillary Clinton speak directly on such a critically important topic.”

Where Clinton and Trump Stand

Penn State climate scientist Michael Mann even speculated in The Guardian, “One has to wonder if television networks are compromised by the millions of advertising dollars they take from fossil fuel interests.”

According to Michael D. McCurry, a chairman of the Commission on Presidential Debates, the moderator and the candidates set the content. Regardless, Clinton or Trump could have easily bridged the questions posed to address climate change if they had wanted to. So clearly, neither of them placed a high priority on the issue.

And that is exactly how it should have been.

Contrast climate change with many of the topics asked about in the debates: the Syrian civil war (asked about six times), terrorism (four times), Russia (three times), immigration (three), job creation (three), and the national debt (twice). These are real issues that demand our attention.

But man-made climate change is a hypothetical future problem based on controversial computer model forecasts. There is little happening now that warrants our concern.

In his 2014 book “The Deliberate Corruption of Climate Science”, Dr. Tim Ball, former University of Winnipeg climatology professor and now chief science adviser of the International Climate Science Coalition, wrote, “Contrary to the message of the last thirty years, the current rate of climate change is well within the bounds of natural variability.”

The United Nations’ Intergovernmental Panel on Climate Change (IPCC) estimates that the statistical average of surface temperatures increased 1.53 degrees between 1880 to 2012. Such modest warming is not surprising given that the Earth has been recovering from the Little Ice Age since the late 19th century. Humanity’s contribution to this relatively small temperature rise is obviously not a problem of the same importance as terrorism or the Syrian civil war.

Contrary to the excited rhetoric of groups like 350 Action, the National Oceanic and Atmospheric Administration website shows that the incidence of extreme weather state records has been decreasing in recent years. Not a single record was set in 2016 or 2015. In 2014, there was one. 2013, one. 2012, one. One has to go back to the 1930s to find a time when state-wide extreme weather records were being set at often.

Roger Pielke Jr., a professor of environmental studies at the University of Colorado, Boulder, summarized the situation well in 2014: “When you read that the cost of disasters is increasing, it’s tempting to think that it must be because more storms are happening. They’re not… In reality, the numbers reflect more damage from catastrophes because the world is getting wealthier. We’re seeing ever-larger losses simply because we have more to lose—when an earthquake or flood occurs, more stuff gets damaged.”

Other climate change concerns are similarly unfounded. For example, the current rate of sea level rise is less than one tenth that of 8,000 years ago. There are regions in the ocean where pH (a measure of acidity) varies more in a day than the most extreme forecasts for the 21st century, yet ocean life adapts. Arctic summer sea ice area increased almost a million square kilometers between 2012 and this year.

Yet Vox, a prominent American advocacy news website, argued on Thursday, “Humanity is departing from the stable climatic conditions that allowed civilization to thrive, yet the most powerful nation on Earth can’t set aside five minutes to discuss.”

The best answer to Vox, Leonhardt, Boeve, Mann, and The Baltimore Sun was unexpectedly provided last year by Clinton herself. In the leaked emails of John Podesta published this week by WikiLeaks, it was revealed that in her Sept. 9, 2015 meeting with the Building Trades Union, Clinton said, “They [climate activists] say, ‘Will you promise never to take any fossil fuels out of the earth ever again?’ No. I won’t promise that. Get a life, you know.”