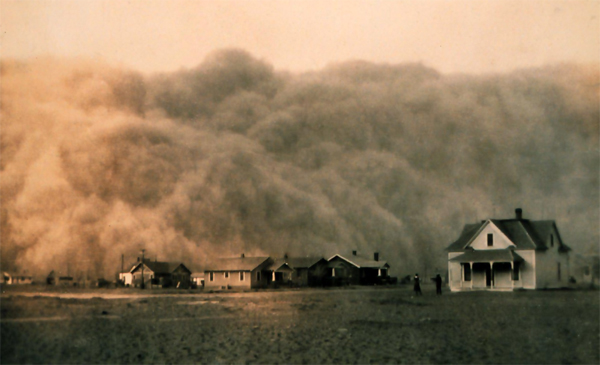 Dust storm in Texas during the Dust Bowl of the 1930s. New research finds that the American West is set to face a megadrought, worst than the Dust Bowl, in the next century due to climate change. Photo by: Public Domain.
Environment

In the recent film Interstellar, a mysterious phenomenon known as “the blight” is wiping out agriculture around the world until only corn—for some reason—survives. Humanity is on the brink of starvation. While the blight may be science fiction, global warming is not, and a new study finds that future warming could decimate the U.S.’s Central Plains and Southwest regions over the next century, topping even the worst drought of the last thousand years.

“I was honestly surprised at just how dry the future is likely to be,” said co-author Toby Ault at Cornell University.

The research, published in the first edition of Science Advances, found that future drought conditions are likely to exceed a megadrought that swept through the western U.S. in the 12th and 13th Centuries. This Medieval megadrought across the Southwest was so bad it has been blamed, at least in part, for the collapse of the Anasazi people, who disappeared from the region around that time. A megadrought is a drought that lasts longer than decade, which means the Dust Bowl of the 1930s doesn’t even apply.

To predict future drought risk, the scientist first turned to tree ring data going back to 1,000 AD to document past conditions, including the megadrought of the 12th and 13 centuries. Then they ran 17 computer models of future climate predictions from 2050 to 2099, including both a business-as-usual—i.e. high—carbon emission scenario and a moderate one.

The researchers consistently found that future drought in the American Central Plains and Southwest “will likely exceed even the most severe megadrought periods of the Medieval era…representing an unprecedented fundamental climate shift with respect to the last millennium,” they write. According to the paper, there is over an 80 percent chance of a megadrought lasting for decades in the region in the second half of this century.

Experts have long-warned that climate change from burning fossil fuels will likely exacerbate drought conditions in this region, but the new study is unparalleled both for the magnitude to the drought and the invariability of its findings.

“The surprising thing to us was really how consistent the response was over these regions, nearly regardless of what model we used or what soil moisture metric we looked at,” said lead author Benjamin Cook with the NASA Goddard Institute for Space Studies and the Lamont-Doherty Earth Observatory. “It all showed this really, really significant drying.”

And it’s unequivocally linked to climate change. There there will not be significantly less precipitation, according to their findings, but warmer temperatures from climate change will make water evaporate much more quickly from the land back into the air, a process scientists call evapotranspiration.

In addition to running 17 models, the team used three different metics for drought: each of which showed drying beyond anything seen in the last 1,000 years. Their findings extend, on the eastern end, from southern Minnesota and western Iowa—including the edge of some of the most rich agricultural land on the continent—all the way west to the Pacific Ocean. They also extend southward to northern Texas.

“Our results point to a remarkably drier future that falls far outside the contemporary experience of natural and human systems in Western North America, conditions that may present a substantial challenge to adaptation,” the researchers write. “Future droughts will occur in a significantly warmer world with higher temperatures than recent historical events, conditions that are likely to be a major added stress on both natural ecosystems and agriculture.”

Drought has already become a way of life in much of the American West. According to the U.S. Drought Monitor, 11 of the past 14 years have seen droughts across California, Nevada, New Mexico, and Arizona. Indeed, California is in the midst of its worst drought in at least 1,200 years, according to a study last year in Geophysical Research Letters.

But current water management strategies today may make future megadroughts even more challenging, according to the new study.

“Recent years have witnessed the widespread depletion of nonrenewable groundwater reservoirs, resources that have allowed people to mitigate the impacts of naturally occurring droughts,” the scientists write. “In some cases, these losses have even exceeded the capacity of Lake Mead and Lake Powell, the two major surface reservoirs in the region. Combined with the likelihood of a much drier future and increased demand, the loss of groundwater and higher temperatures will likely exacerbate the impacts of future droughts.”

The scientists don’t write that the drought-like conditions could be avoided. However, given that climate change is the primary driver, any efforts now to slash greenhouse gas emissions could potentially make a difference.

“Changes in precipitation, temperature and drought, and the consequences it has for our society—which is critically dependent on our freshwater resources for food, electricity and industry—are likely to be the most immediate climate impacts we experience as a result of greenhouse gas emissions,” said Kevin Anchukaitis, a climate researcher at the Woods Hole Oceanographic Institution, who did not work on the research.

This article was written by Jeremy Hance, a contributing writer for news.mongabay.com. This article has been republished with permission, origin here.