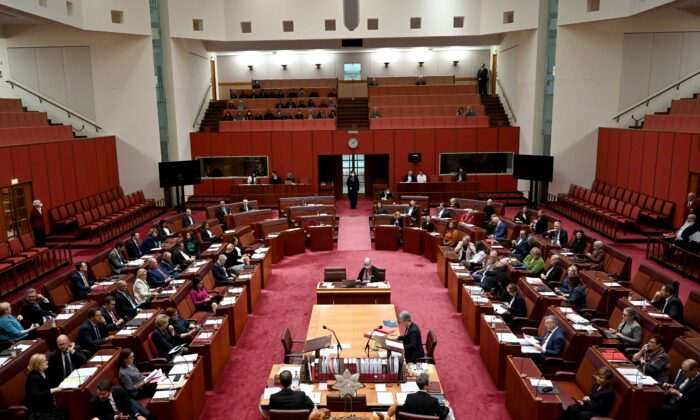 Senators divide during the vote for the Climate Change Bill in the Australian Senate chamber at Parliament House in Canberra, Australia on Sept. 8, 2022. (AAP Image/Mick Tsikas)
Australia

The centre-left Labor government’s Climate Change Bill has passed the Senate with support from the left-wing Australian Greens party and key crossbench members, paving the way for a new emissions reduction target to become law.

The legislation, which cleared the upper house on Sept. 8, will impose a 43 percent emissions reduction target by 2030, as well as net-zero by 2050.

The Albanese government agreed to amendments from Independent Senator David Pocock for stricter reporting requirements to the relevant minister, but refused the Greens’ push for a higher reduction target of 75 percent by 2030, as well as a ban on coal and gas projects.

Chris Bowen, the minister for Climate Change and Energy, said passage of the bill “sends a message to the world that Australia is serious about driving down emissions, and serious about reaping the economic opportunities from affordable renewable energy.”

“Legislating these targets gives certainty to investors and participants in the energy market and will help stabilise our energy system.”

The Australian Energy Council welcomed the legislation, saying it will “give businesses and industry greater clarity.”

“For sectors like electricity, which are already deeply invested in Australia’s decarbonisation journey, policy confidence is critical to the sector’s orderly transition,” said Sarah McNamara, CEO of the Council.

The centre-right Coalition, however, voted against the bill, with opposition leader Peter Dutton calling the measure a “tax by stealth.”

“Our concern is that when faced with economic headwinds, rising costs of living and energy shortages, some nations will not honour their emission targets including some of our competitor nations,” he told a mining conference in Canberra.

“Labor’s legislation will deny the government important policy options, placing Australia in an inflexible position when all nations need flexibility to respond to volatile conditions.”

Nationals Senator Matt Canavan said setting the target was “naive” and that similar initiatives were leading to power shortages in Europe.

“Unless something changes, it’s not too dramatic to say that almost invariably people will die over the European winter unnecessarily because of these failed, naive, climate change policies,” he told the Senate.

Meanwhile, Greens leader Adam Bandt called for cooperation with the Labor Party on a “scheme that might cut pollution” rather than “work with the Liberals … and have a scheme that allows pollution to go up and new coal and gas mines to be open.”

Heated Debate Over What ‘Net-Zero’ Means for Australians

She asked Wong to define in “layman’s terms” what net-zero would mean for Australia.

Wong replied, saying she was not sure how to “explain it other than to say it means net-zero.”

“I’ll think through if I can provide an explanation that makes it clearer than that, to me, the words net-zero are quite clear I think we all understand what net emissions means,” Wong said.

“I am reminded of a time when I was climate minister, and I think Senator Fielding wanted an explanation, and I got in the chief scientist to try and take him through it, and we did get to a point where I thought I don’t actually know, and neither did she at that time, how to break it down any further.”

Hanson replied, saying she was “gobsmacked” by the answer and accused Wong of not “knowing what net-zero is anyway” before asking, “how much is it going to cost the Australian taxpayers to reduce emissions by 43 percent.”

Wong did not outline a figure, instead saying Labor’s model would create 604,000 jobs and attract A$75 billion (US$50.65 billion) of investment.

Previously Frank Calabria, managing director of Origin Energy, which operates Australia’s largest coal-fired power station, said on June 7 that the world would need to pour A$120 trillion (US$86.25 trillion) into the renewable sector between now and 2050 if it wants to achieve net-zero by 2050.