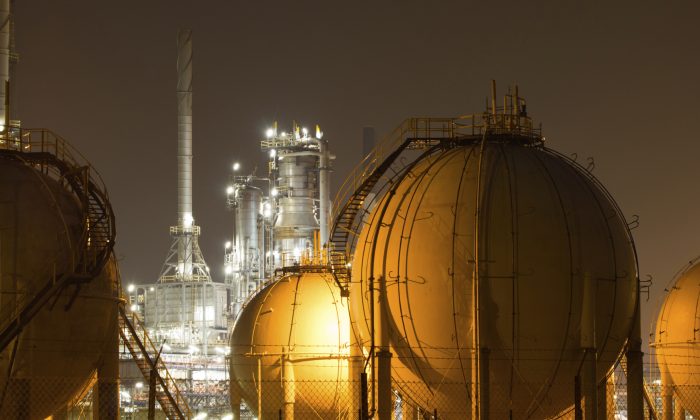 Close-up of an oil-refinery plant. Fossil fuels are the source of 86% of the world energy supply. (claffra/iStock)
Environment

Listening to government officials speak about climate change, one could easily assume that their plans were based on settled science. We know, with a high degree of certainty, they expect us to believe, that climate catastrophe lies just ahead if we do not dramatically reduce carbon dioxide (CO2) emissions. The best way to do this, they say, is to ween ourselves off fossil fuels, the source of 86 percent of the world energy supply.

For it to be rational to spend vast sums attempting such a transition, several conditions would have to be met.

We would have to know, with a high degree of confidence, that future global warming, if it occurs, will be dangerous. In the past 150 years, we have seen a rise in the global temperature statistic of only about 0.8 degrees Celsius despite a supposed 40 percent increase in atmospheric CO2 levels. This slight warming has been highly beneficial as we emerged from the Little Ice Age. So, it is only future rise that is problematic. And for it to be a public policy issue at all, that rise would have to be dangerous.

The probability that future global warming, if it occurs, will be dangerous is about 2 percent, according to Dr. Tim Ball, former University of Winnipeg climatology professor.

The probability that future global warming, if it occurs, will be dangerous is about 2 percent, according to Dr. Tim Ball, former University of Winnipeg climatology professor. His conclusion is supported by “Why Scientists Disagree About Global Warming,” the 2015 report of the Nongovernmental International Panel on Climate Change (NIPCC) which asserted: “No evidence exists that … [a warming of 2 degrees Celsius, the figure the U.N. says we need to avoid] would be net harmful to the global environment or to human well-being.”

But let’s say that there is a 10 percent chance that future global warming, if it happens, will be dangerous.

We would also have to know that the cause of this threatening change would probably be an increase in atmosphere CO2 concentrations. CO2 rise is not a concern otherwise since it is not a pollutant.

And according to the NIPCC report, “No close correlation exists between temperature variation over the past 150 years and human-related CO2 emissions.”

We are now 19 years into the “global warming hiatus,” a period of no overall temperature rise despite an alleged 10 percent increase in atmosphere CO2 levels. This was confirmed in “Making sense of the early 2000s warming slowdown,” a paper published in the March edition of the journal Nature Climate Change.

Ball says that, if dangerous global warming were to occur, the odds of its being caused by greater CO2 concentrations are effectively zero. Changes in the output of the sun play a far more major role, he and others assert. However, let’s assume that there’s a 10 percent likelihood that the cause of dangerous warming would be rising CO2 levels.

Next, we would have to know that CO2 levels will actually rise as a result of increasing CO2 emissions from our fossil fuel use.

While many people assume that CO2 concentrations have risen in recent centuries, some scientists dispute this. Ball says, “The CO2 level from pre-industrial times was completely manipulated to show a steady rise from 270 ppm to the current 400 ppm. Scientifically valid chemical measurements of 19th century CO2 levels in excess of those of today were simply ignored.”

Climate expert Dr. Zbigniew Jaworowski revealed this deception in his March 19, 2004, testimony before the U.S. Senate Committee on Commerce, Science, and Transportation. He explained, “The modelers ignored the evidence from direct measurements of CO2 in atmospheric air. [There was] a biased selection of data.”

Ball concludes, “There is no sound reason to assume CO2 levels will necessarily rise. Indeed, there could be a drop as global cooling results in CO2 absorption by a cooling ocean.” He assigns a 20 percent probability that CO2 levels will rise in the foreseeable future. But let’s assume the odds of future CO2 rise are 75 percent.

But is this rise, if it occurs, likely to be caused by human activities? Or could it be a result of outgassing from the oceans if they warm due to solar changes. Ball says there is a 2 percent chance that, if CO2 rises, it will have been caused by industrial activity. Giving the alarmists another break, we will say that there is 50 percent chance that any possible future CO2 rise will be caused by us.

Calculating the product of the aforementioned probabilities—10 percent x 10 percent x 75 percent x 50 percent—reveals that there is only a 1 in 260 chance that future global warming, if it occurs, will be dangerous, will be caused by increasing CO2 levels, and that such a rise will be a result of human emissions. Using Ball’s estimates, the probability is zero, of course.

Finally, we would have to also know that, were a global warming disaster ahead, it is more cost effective to reduce CO2 emissions (mitigation) than to simply adapt to future change. Ball believes that there is only a 1 percent chance that mitigation is more cost effective than adaptation. Several studies support this conclusion. Regardless of the probability we chose for this, the overall odds that mitigation is the right approach become vanishingly small.

Contrast this against the probability that quickly moving away from fossil fuels, coal in particular, will cause great hardship for America, a likelihood that Ball places at 100 percent.

As a result of the “Clean Power Plan” (CPP), the Obama administration’s signature climate mitigation effort, coal, the nation’s cheapest and most reliable electricity source, is under siege: 49,000 megawatts of coal-fired electricity will be eliminated due to the CPP, at an increased wholesale power cost of $214 billion between 2022 and 2030. This is forecast to result in power rate increases of up to 31 percent in half of all states. Electric power grid operators worry about the reliability of America’s power supplies if the CPP goes ahead.

While leading GOP Congressmen have consistently opposed the climate scare, in the past two years they have done little to support coal, the major casualty of the government’s mitigation focus. Over 50 percent of the mines and miners in Central Appalachia are now idle and 49 U.S. coal companies are currently bankrupt.

Incredibly, 115 million Americans already qualify for energy assistance. As coal-fired electricity generation is replaced with more costly power sources in the name of “stopping climate change,” energy poverty will become more and more common, ruining lives and business across the United States. What is Congress waiting for?