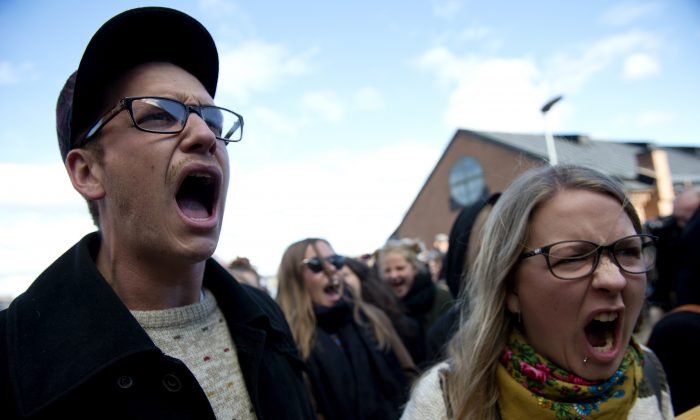 The good news is that the balance of evidence continues to point toward modest warming scenarios, not catastrophic ones, from the human influence on global climate.

This would seem to be good news.

But now, some climate activists are going to extreme measures to attack our energy renaissance, analogizing that opposition to pricing carbon dioxide is akin to benefitting from slavery. “Burning fossil fuels is an ethical problem,” said former EPA official Wes Wilson. “Slavery had a lot of economic benefits, but it had an ethical problem.”

MSNBC host Chris Hayes likened the fossil-fuel lobby to slave owners reluctant to renounce their economic interest. “You must confront the fact that the climate justice movement is demanding that an existing set of political and economic interests be forced to say goodbye to trillions of dollars of wealth,” he wrote.

The smears do not stop there. Despite vowing not to use the expression “climate change deniers”—with its purposeful similarity to “Holocaust deniers”—prominent green activist Joe Romm recently did just that.

There’s an obvious reason the climate change crowd is resorting to loaded hyperbole—their popularity with the broader American public is waning. One recent poll found that only about a third of our fellow citizens think that global warming will ever seriously threaten their lifestyle.

Even some ostensible allies of the climate-change movement worry that their cause is getting infected with anti-scientific zealotry.

Take, for instance, the recent “Summary for Policymakers from the Intergovernmental Panel on Climate Change” (IPCC). The alarmist summary is in contrast with the body of the report. As scholar Steven Hayward noted, one chapter used the terms “uncertainty” and “uncertain” 173 times, and “error” and “errors” 192 times.

Another IPCC report on the economics side of climate change has attracted trenchant criticism. Harvard’s Robert Stavins complained how government representatives were allowed to remove or change text, regardless of the underlying research. In other words, activist public regulators were free to slice and dice the findings to best fit their agenda.

Economist Richard Tol complained that a “key message” from an early draft of the SPM—”many of the more worrying impacts of climate change really are symptoms of mismanagement and underdevelopment”—was deleted because of its political implications. According to Tol, the IPCC report was manipulated to focus on the “impacts of climate change and the four horsemen of the apocalypse.”

Professor Tol, who has been involved with the IPCC for 20 years, disassociated himself from the report, calling instead for doing “away with alarmism … away with activists posing as scientists.”

Hayward also documented the recent “vilification and intimidation” of climate-change experts who deviate from groupthink. The latest example? Swedish meteorologist and respected climate change expert Lennart Bengtsson withdrew his affiliation with the Global Warming Policy Foundation after only a week because of unbearable pressure.

This environmental alarmism is far from harmless. In June, the Obama administration revealed new plans for limiting carbon dioxide emissions—and most believe the regulations will lead to state-by-state cap-and-trade schemes.

California already went down this road with discouraging results. The cap-and-trade program will likely raise gasoline prices in the Golden State—where fuel is already over $4 per gallon—by 12 cents per gallon next year.

Climate change activists are in trouble intellectually and spurned in the court of public opinion. Yet those who are emotionally and financially dependent on the climate crusade too often resort to offensive hyperbole and to smearing their critics.

It is past time to get real on climate. A good place to start is with civility to allow the scientific process to run its deserved unimpeded course.

Robert L. Bradley Jr. is CEO and founder of the Institute for Energy Research and the author of seven books on energy history and public policy.