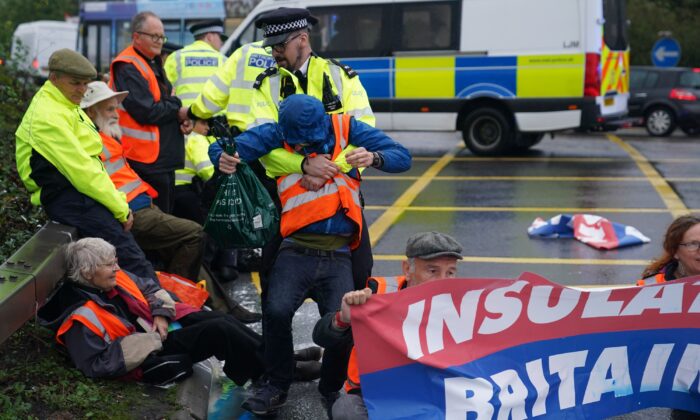 Activists from the group blocked Junction 3 of the M25 in Kent at around 7.30 a.m. and glued their hands to the road surface, Kent Police said.

Eleven people were arrested at the scene on suspicion of obstructing the highway, conspiracy to commit public nuisance, and criminal damage.

A few hours later, the group again brought traffic to a halt on M25 by blocking the Swanley roundabout, also in Kent. Police said they arrested 16 protesters at the scene.

“All 27 people are currently in police custody,” the force said.

After the group shut down parts of M25 five times in just over a week earlier this month, the government obtained an injunction against the protests and warned that activists would face possible imprisonment if they made further such attempts.

But the group was not deterred and swung back into action just two days later, blocking the Port of Dover in southeast England, the busiest ferry port in Europe, on Sept 24.

On Monday morning, more than 50 protesters from the group blocked the M25 again at the exit leading to the Heathrow Airport.

Insulate Britain said in a statement on Wednesday that they were “going nowhere” despite the threat of prosecution.

Kent Police said the force is working with prosecutors on how to deal with the arrested protesters.

“Officers are continuing to conduct enquiries relating to those individuals arrested in connection with the protests in Dover and on the Kent section of the M25,” Kent Police Superintendent Andy Gadd said.

“We are liaising closely with the Crown Prosecution Service to ensure that the most appropriate outcome is sought, including if any charges can be made,” he said.

But Lisa Townsend, police and crime commissioner for Surrey, which has also been affected by the road-blocking protests in recent weeks, said on Wednesday that it is “very difficult” to bring charges against Insulate Britain protesters.

She said her inbox had been inundated with emails from local residents asking: “How are these people being arrested only to be released to do it again?”

“It has been very difficult for the police because if they charge the protesters with a relatively minor offence, it is likely to be discontinued. And if they try to elevate the charge to a more serious one, they are finding it is not reaching the necessary threshold,” she explained.