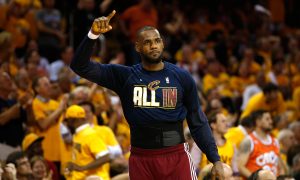 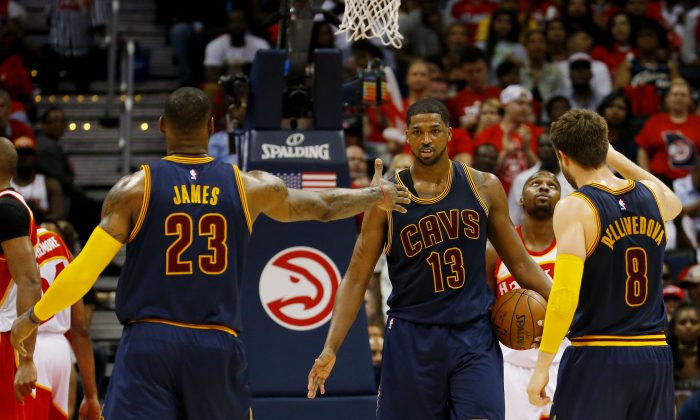 The Cleveland Cavaliers topped the Golden State Warriors 96–91 in Game 3 of the NBA Finals on Tuesday night to take a two games to one lead in the series. And though a number of Cleveland players had a role in the crucial win, it mainly came down to the team’s Big Three—LeBron James, Tristan Thompson, and Matthew Dellavedova.

That’s right. Cleveland has a new Big Three, and they’re two wins away from bringing the franchise its first-ever title.

Let’s be honest here. At least on offense, Kevin Love is still better than Tristan Thompson and Kyrie Irving is better than Matthew Dellavedova.

But sometimes too many cooks in the kitchen is a bad thing.

To win it takes more than shooting. It takes aggressive defense, it takes rebounding (on both ends), it takes setting screens, and it takes hustling for loose balls.

In all fairness, Love is a great rebounder too, but his shooting is somewhat wasted as the third option, and he’s not a great defender.

Irving is one of the better ball-handlers in the game, but he’s not a great defensive player on the perimeter—which is exactly where Golden State burns teams with the long-range shooting of Stephen Curry and Klay Thompson.

There are lessons from history to be learned here with this kind of lineup.

Just look at the Team USA roster before Jerry Colangelo took over in 2005. The previous regime put good players on the roster, but they didn’t complement them with more defense-oriented players in 2002—when the team failed to medal in the World Games. Without Colangelo, whose teams have gone 52–1 in world play, would Tayshaun Prince have made the Gold-medal team in 2008? What about Tyson Chandler in 2012 when they repeated as champions?

It didn’t hurt that he hired the revered Mike Krzyzewski to coach the team, but Coach K knows it takes more than shooting to win.

That’s what Cleveland now has.

Dellavedova’s defense on Stephen Curry, so far, has been remarkable and his hustle for loose balls has been contagious—and it endears him to the crowd. Reigning MVP Stephen Curry—who was shut down by Dellavedova in Game 2 and for the first three quarters of Game 3—finally got on track in the fourth, but it was too little, too late.

Despite chasing Curry around screen after screen, the unsung Dellavedova—who went undrafted two years ago out of St. Mary’s—found enough on the other end to put up 20 points himself.

Thompson, who has flourished since Love’s injury against Boston in round one, is averaging 14 rebounds a game in the Finals. In addition to the boards he grabs, the ones he can’t get to, he’s sometimes able to tip away from the opponent so that a teammate can get it.

Of course, this formula works best if you have four-time MVP James to run your offense through. LeBron, who won the scoring title in 2008 and has 123 points through three games—the most in NBA Finals history—already knows this. He anchored Team USA’s 2008 and 2012 teams.