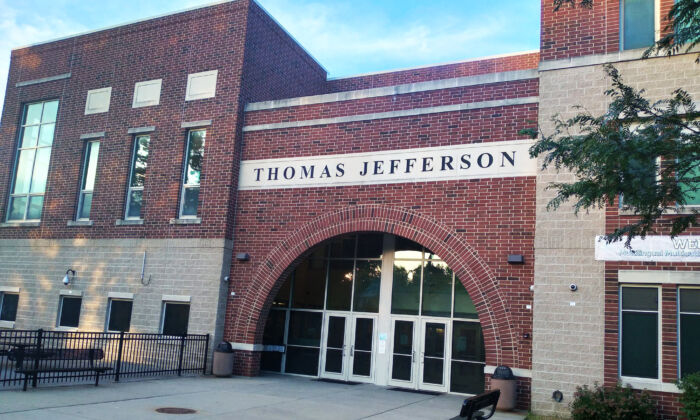 Thomas Jefferson International Newcomers School in Cleveland, Ohio, was one of three city schools renamed by the school board on June 28 because of the statesmen's racially problematic pasts, school officials said. (Michael Sakal/The Epoch Times)
US

The Cleveland Metropolitan Schools district has removed the names of two American statesmen and a scholar from decades-old schools and replaced them with the names of women who made an impact on the northeast Ohio region.

In a move that can be considered either cancel culture or social change, the CMS School Board voted on June 28 to remove the names of Thomas Jefferson, Patrick Henry, and Louis Agassiz from the schools, citing their “racially problematic pasts,” and Jefferson’s and Henry’s being slave owners.

The name changes were effective immediately.

In late December, school officials announced that they were working with an ad-hoc committee to remove the names of seven of its schools in what they said is an effort to improve the image of the district that has a 73 percent minority student population including 71 percent African-Americans.

Overall, Cleveland Metropolitan Schools has about 39,000 students, according to information from the school district.

The name change considerations for the schools stem from the 2020 death of George Floyd, a man who died at the hands of Minneapolis police.

Guidelines implemented by the district last year with the urging of the Cleveland City Council require that schools not be named after people who have a documented history of enslaving other humans.

The district also prohibits naming schools for those who have actively participated in the institution of slavery, systemic racism, the oppression of people of color, women, or other minority groups, or who have been a member of a supremacist organization.

Pagan, who died in 2016, was a community leader, school district administrator, and principal who led the Newcomers Academy, a school for immigrants and refugees.

Jefferson was the lead writer of the Declaration of Independence. He also was the first secretary of state of the United States (1789–94), its second vice-president (1797–1801), and, as the third U.S. president (1801–09), he was responsible for the Louisiana Purchase.

Pagan’s daughter Melissa Pagan who lives in Miami, Fla., was present at the school board meeting announcing the renaming of the school, according to information on the school district’s website.

Having a school named for her mother was a joy and a complete honor, she told the board members.

“She put all her heart into her work, into the community,” Melissa Pagan said in a statement to the district.

Tubbs Jones also was a Cuyahoga County Court of Common Pleas judge and county prosecutor, who served in Congress from 1998 until she died in 2008.

“Children have to see success every day,” Conwell said in a statement to the school district. “They will get a chance to see that, to see pictures of her and aspire to be just like Stephanie Tubbs Jones.”

The leader of an organization that opposes Critical Race Theory, comprehensive sex education, and cancel culture, wasn’t so enthusiastic about the name changes of the schools.

“Everything has to be Woke,” Jonathan Broadbent, team lead for Protect Ohio Children in northern Ohio, told The Epoch Times.

“If you’re trying to take over or change a society, you have to first diminish and destroy its proud history. Look at what’s happened with all the statues of patriots and presidents around the United States, especially Christopher Columbus.

“That’s what this is all about—destroy from within, minimize, vilify, and destroy the history.

“The state, these schools are funneling money into bad places, and ignoring real issues,” Broadbent added.

“These school officials are spineless. I’ll go into these school buildings when I can watch the Cleveland Indians play baseball again. It’s all about bullying and money.”

Patrick Henry was one of the first major orators in the country and a major figure in the American Revolution.

He was perhaps best known for his words “Give me liberty or give me death!” which he delivered in 1775.

Both Jefferson and Henry were slave owners, causing concern in Cleveland where a majority of students are from minorities, according to information from the district.

She was an internationally known lecturer, educator, and activist for racial equality and women’s rights from the late 19th century through the mid-20th century.

She earned bachelor’s and master’s degrees from Oberlin College.

Agassiz studied polygenics, a type of research that argues races are fundamentally unequal.

Thomas Ott, deputy chief of communications for Cleveland Metropolitan Schools, and Kevin Burtzlaff, the school district’s attorney, could not be reached for comment.

Trent Mosely, the chief strategist and implementation officer for the district, also could not be reached for comment, but in an earlier statement he issued through the school district said, “The [renaming] process has been thorough and fair … the way they have approached it has been impressive.

“We want our students to be proud of the buildings they walk into,” Mosley added.

Following Floyd’s death riots broke out in major cities throughout the United States, resulting in the deaths of, and injuries to, a number of law enforcement officers trying to keep order and protect businesses.

Downtown Cleveland was heavily damaged during the riots as they extended it to the prestigious Playhouse District.

Businesses and restaurants already were trying to recover from the hardships brought on by COVID-19.

A historian researched the origin of the names of every school in the district, as well as proposed new names. The school district collected feedback and suggestions for new names at community meetings and online, mostly throughout February and March.

In addition, 13 other schools in the school district could be targeted for name changes in the future, including John Marshall and James Ford Rhodes high schools.