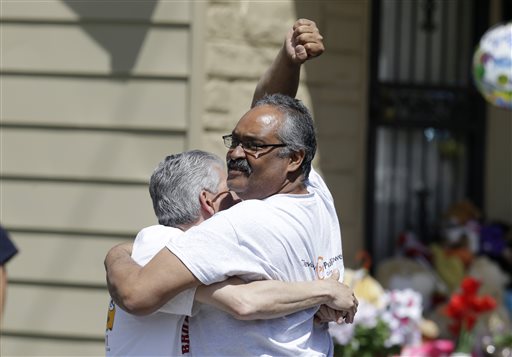 Felix DeJesus pumps his fist after bringing home his daughter, Gina, Wednesday, May 8, 2013, in Cleveland. DeJesus was one of three women held captive for about a decade at a run-down Cleveland house. Ariel Castro, owner of the house, has been charged with rape and kidnapping. (AP Photo/Tony Dejak)
US

Ariel Castro has been charged with four counts of kidnapping and three counts of rape, after three girls and a young child were found in his Cleveland home earlier this week.

Deputy Chief Ed Tomba said over 200 items of evidence have been taken from his Seymour Avenue home, and along with testimony from the three girls, authorities believe they have enough evidence to convict Castro.

The girls were found after one of them, Amanda Berry, started screaming on May 6, getting the attention of a neighbor, Charles Ramsey. Ramsey came and knocked down part of a door and let her out, then called 911.

Meanwhile, Tomba said that the brothers of Ariel that were arrested along with him, Pedro and Orin, have been cleared of any involvement in the case. They apparently didn’t know about the locked away girls.

“We focused on their knowledge, and lack of knowledge,” said Tomba. “There is nothing that leads up to believe that they had any knowledge of this. Ariel kept everybody at a distance.”

FBI investigators pored over Castro’s home over the past few days, bringing out the hundreds of pieces of evidence to be examined over the coming weeks.

On May 8, FBI investigators also went into another home on the block, several doors down, to collect evidence. Tomba said there is no suspect at that home but that authorities had received information to lead them to believe evidence may be there.

Tomba and other city officials said they couldn’t reveal many details of the case because it’s an open investigation.

However, Tomba did say that all three girls had been victims of rape. The young child’s mother is Berry, he said, but authorities don’t know who the father is. They have taken DNA from Castro to see if he is the father.

The victims need time and privacy to heal from the “very traumatic incident,” stressed Public Safety Director Martin Flask. Berry’s sister told reporters earlier in the day that the family needs privacy. None of the victims have spoken publicly.