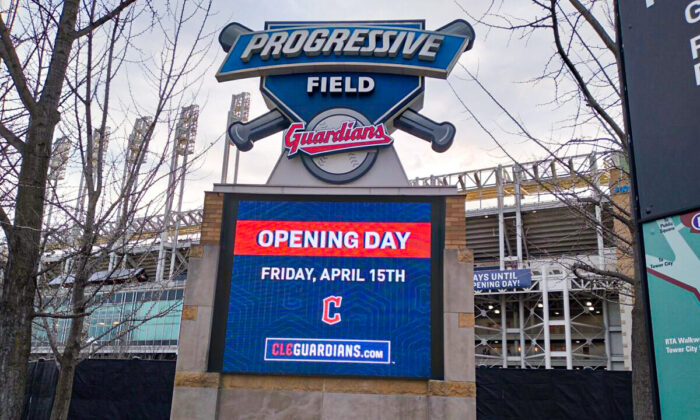 After the Cleveland Indians fronted Chief Wahoo as its mascot for 90 years, the team held its inaugural game for the Cleveland Guardians on April 15, 2022. The San Francisco Giants beat the Guardians, 4-1. (Michael Sakal/The Epoch Times)
Baseball

For the first time in nearly 50 years, representatives from Native American groups could not be seen outside Cleveland’s baseball stadium prior to the team’s home opener protesting Chief Wahoo—the former mascot of the city’s beloved baseball team for 90 years.

That’s because the Cleveland Indians, from 1915 to 2021, now officially are the Cleveland Guardians—baseball with wings and a capitalized G on the ball’s side as its logo. Its mascot name Guardians is derived from the 43-foot-tall Romanesque-looking concrete structures towering over motorists on the city’s Hope Memorial Bridge, depicting the progress of transportation.

From the late 1890s to about 1908, Cleveland was the leading auto manufacturing hub of the United States, ahead of Detroit, and now, Cleveland’s 2022 Major League Baseball season is rolling out a new era.

Although generations of Indians fans throughout the United States still are not happy about the team’s ownership announcing its name change in late July, the excitement among fans for the new name and those who prefer the former one at Cleveland’s sold-out home opener for the regular season on April 15 were pretty evenly divided.

The San Francisco Giants beat the Guardians, 4-1 with the help of three home runs. The loss stopped the Guardians’ four-game winning streak.

Scalpers outside the ballpark said tickets in the lower level of the historic event were going anywhere from $100 to $400, and a pair of tickets in the second deck behind home plate were about $150 apiece.

Giants pitcher Carlos Rodon, who had pitched a no-hitter against the Indians last year (on April 14 as a Chicago White Sox pitcher), struck out 12 Guardians in its home opener.

Actor Tom Hanks, who threw out the first pitch, said prior to the game that he had “Guardians Fever,” voicing his support for the new name despite thousands of fans across the United States who opposed it.

Hanks, who played the role of Coach Jimmy Dugan in the 1988 film “A League of Their Own,” based on the true story of the All-American Girls Professional Baseball League, was known for the line, “There’s no crying in baseball!”

The Guardians game had its festive and nostalgic moments for Cleveland fans as Hanks threw the first pitch to Larry Doby Jr. Doby’s father played for the Indians and was the first African American to play in the American League.

The historic occasion also came on the 75th anniversary of the Major League debut of Jackie Robinson of the Brooklyn Dodgers breaking baseball’s color barrier to become the first black to play Major League ball.

When the Indians made the announcement in December that it would drop the name Indians because Native American groups continued to find the mascot offensive, the team issued a statement alluding to the riots across the country in 2020 fueled by the Antifa extremist group and the Black Lives Matter movement.

The team’s name change to Guardians came as many professional, college, and high school mascots have been targeted by the cancel culture movement to eliminate them and change the team’s name. In 1997, Miami University of Ohio changed its mascot from Redskins to RedHawks after being pressured from the Miami Tribe. Embattled Major League Baseball Commissioner Rob Manfred has pressured the Atlanta Braves to remove its mascot, and went as far as to remove the 2021 MLB All-Star Game from Atlanta to Denver.

But, the bottom line is that the 2022 Major League Baseball season is underway, and people appeared more excited about the players more than they are the new team name.

“It’s not about the team name, it’s about the players,” said Tony Yaroshak, 33, of Parma, a west Cleveland suburb. “We’re ready for the year. Hopefully, we’ll make the playoffs.”

Yaroshak was attending Cleveland’s home opener for the 12th year with his buddies, Dustin Godenswager and Kyle, who didn’t want to provide his last name.

“I think the new name is great,” Godenswager said of the Guardians. “I like it.”

The new name is steeped in the city’s history, and fronted many fans’ hoodies, T-shirts, and a few caps. But how it will connect with fans remains to be seen.

Not everyone was excited about the new team name.

That was the case for three generations of the Newell family from the Canton area in northeast Ohio, who attended the game.

The sentiment of Newell’s son, Ryan, echoed his father, as did Ryan’s son Blake, who is 10.

“This is Indians Opening Day,” Ryan Newell told The Epoch Times. “The name change is a disappointment, but it’s what we expected to see. If the Indians ownership would not have panicked and waited about a year or two, this likely would have blown over and people would’ve forgotten about it.”

“I’m glad they signed Jose Ramirez to a seven-year contract with a no-trade clause,” Ryan Newell added. “It’s nice to see someone will be staying with the team for a while.”

Blake Newell said he is excited to see how Guardians catcher Austin Hedges does this season.

The Guardians emerged as the team name after reporting slightly more than 1,000 possibilities. Other team names under consideration were Spiders, the original name of Cleveland’s baseball club from 1887 to 1899, the Buckeyes, the Rockers, and the Fellers, as a tribute to Indians pitching legend Bob Feller.

Numerous people were still wearing Feller throwback jerseys with the late 1940s Chief Wahoo on the sleeve and his No. 19 on the back.

Chief Wahoo already had been eliminated from the team’s jerseys and caps following the 2018 season through the push of organizations such as Change.org, the Cleveland Indian Education Center, and the Cleveland-based American Indian Movement (AIM), with the support of MLB Commissioner Manfred.

Some people who attended the home opener said they believe the team’s fan base will eventually get used to the name, and they’ll get over the disappointment in the team’s owners, Larry Dolan and his two sons, Paul and Matt Dolan.

Matt Dolan is an Ohio State Senator and is running for U.S. Sen. Rob Portman’s seat on the Republican ticket. He has voiced opposition about the cancel culture movement, and has had to distance himself from his family when asked why he didn’t do more to prevent the elimination of Chief Wahoo and the changing of the team name.

Jim Price from the Columbus, Ohio, area and his friend Chuck have been attending baseball games in Cleveland and told The Epoch Times they have attended eight home openers.

“A lot of thought went into the new name for the team,” Price, 75, said. “The Indians name was better, but people will eventually get used to it after a couple of years.”

Mike Benezzi and his wife, Debbie of Medina, were ushers at Indians games for the last four year. However, Bennezzi, 62, said he had to give that up as it was hard on his knees.

He told The Epoch Times that he believes people are going to be mad about the name change for a while, but there is one key ingredient that needs to be implemented to change that: “If the Guardians start producing teams that win and make the playoffs, people will forget about the name change.”

“Of course, there will be old timers who will still want the Indians. Nobody likes change, but hey, it happens.”

Prior to the Guardians’ home opener, Allen LaPrairie was sitting to the side on the concourse outside Progressive Field waiting on his wife who was parking their car.

Wearing a Guardians sweatshirt with a monument on it from the nearby Hope Memorial Bridge and resting his baseball bat cane, LaPraieire stood out.

Retired from the Coast Guard and having attended Cleveland baseball games for more than 60 years, LaPrairier went to bat for the Guardians.

“When my son Nathan saw the list of possible new names for the Indians, he said Guardians was the best one,” LaPrairie told the Epoch Times. “I agreed with him, and that was the name they chose. I think they have a good team.”

“I call them the Guardians,” LaPrairie added. “I have the new name down pat.”

The Hope Memorial Bridge is located at the western edge of downtown Cleveland with Progressive Field in the near distance. The “statues” per se, are officially called “Guardians of Traffic,” and it’s as if they are standing guard to Progressive Field near the end of the bridge. Each of the eight “Guardians” are holding a vehicle, one a 1930s-era automobile from about the time the bridge was built in 1932.

Teresa Ringenbach, who used to live in Cleveland for several years, made the trip with her significant other to see the game.

“I’m a fan no matter what,” Ringenbach added. “At the end of the day, I still love baseball, and this is my happy place.”