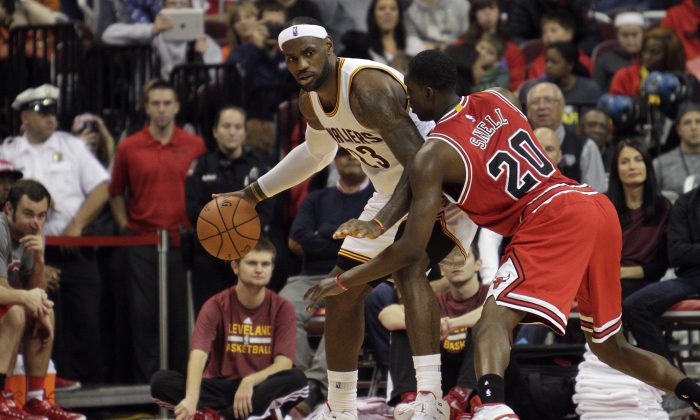 Here’s some of the latest Cleveland Cavaliers rumors and news for the week.

The Cavs held a meeting right after their debut loss to the NY Knicks.

According to ESPN, Coach Blatt said, “You all are such nice people, I’m so happy you weren’t in the morning meeting today because your opinion of me might be vastly different right now.”

“But we cleaned some things up, and the guys responded beautifully and we played a great game,” he said of the team’s victory over the Chicago Bulls.

“He just got on us,” James said of Blatt, per ESPN.

“He got on us from the time we started our meeting to the time we left. And it’s great. For a team like us, we need that. I love constructive criticism. I never took it personal. It’s just an opportunity for us to get better, and it definitely put a fire into us.”

Blatt called the 19 turnovers “irresponsible” and “inexcusable” against the Bulls.

“Anybody talking about us winning it all, I think they’re being unfair to those great NBA teams that are out there that have either won it or have been there to win it, and also to us as a team that’s talented but new,” Blatt said Tuesday following practice. “We have a lot of work to do before we can start claiming anything before it’s time.”

The Cavs, re-shaped this summer by the return of LeBron James, the re-signing of guard Kyrie Irving and a blockbuster trade that brought them power forward supreme Kevin Love, are predicted to win their first NBA championship this season. Las Vegas sports books have picked the Cavs as the 3-1 favorite to win the title — ahead of the defending champion San Antonio Spurs, who are 7-2 to repeat.

Blatt has deep admiration for the Spurs, who throttled James and the Heat in last year’s finals, and coach Gregg Popovich.

“They played beautiful, winning basketball and that’s been a team that over the years has not only been successful but has contributed to the style of play that I think is becoming more and more prevalent NBA-wide,” Blatt said. “I give coach Pop and the players of San Antonio a lot of credit for the style that they play, and for the willingness on the part of the players to be non-ball-dominant and to play together.

CLEVELAND (AP) — Best known for his wild hair and hustle, Anderson Varejao’s heart and hard work got him a new contract with the Cavaliers.

Cleveland signed its starting center to a contract extension on Friday. Terms of the deal were not immediately confirmed, but the sides had been discussing a three-year, $30 million contract.

Varejao was in the final year of a six-year contract he signed in 2008. He’s making $9.7 million this season and would have been eligible to become a free agent this summer before the Cavs decided to lock him up for a few more seasons.

“Anderson represents how this franchise wants to approach the game of basketball, both on the court and off,” Cavaliers general manager David Griffin said.

“He has been a key part of our foundation for years and we are very happy that he will continue to be part of our Cavs family as we work toward our goals at the highest level.

“Andy is, and has been, a tireless worker, an incredible teammate and a great competitor that plays with a rare combination of energy and intensity that makes him truly special.”