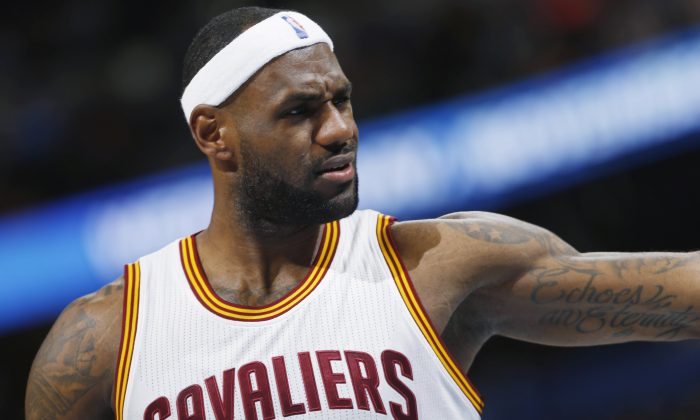 Cleveland Cavaliers forward LeBron James talks to his teammates in the fourth quarter of the Cavaliers' 110-101 victory over the Denver Nuggets in an NBA basketball game in Denver on Friday, Nov. 7, 2014. (AP Photo/David Zalubowski)
NBA

The Cleveland Cavaliers demolished the Atlanta Hawks on Saturday to take a 5-3 record, and here’s some of the latest buzz surrounding the team:

In a turn-of-events, Cavs guard Kyrie Irving asked LeBron James to step up his game.

“It’s more or less, I feel like he takes his foot off the gas a little bit when he can punish guys. He knows it. He’s been in this league a long time. I’m not telling him anything he doesn’t know.”

After he made the comments, LeBron scored 41 points against the Boston Celtics.

“We won ugly,” added Irving. “We don’t necessarily use that as a safety net, because we have a lot of talent on this team, and we can get away with wins like this.”

A few weeks ago, there were rumors Kevin Love would bolt for the Los Angeles Lakers after this season is over.

But he shot those down recently.

He also talked about his odd pregame handshake with Irving, which some said was in reference to illicit drugs. “Whatever we were doing with our hands was about as true as me going to the Lakers,” Love said Friday, via CBS. “Going to the Lakers, I don’t know where someone got that.”

“I don’t know why it was so hard for people to realize we were actually curling our mustache. I guess because I had my fingers in the wrong place,” he added. “But looking at the tape, film don’t lie. It does look like we’re doing something bad, but that’s not the case.”

LeBron says you have to be ‘real’

BOSTON (AP) — Even with almost 17 million followers on Twitter and nearly 22 million on Facebook, LeBron James didn’t hesitate when asked his preferred method of connecting with fans.

“The basketball court,” the Cleveland Cavaliers star said on Thursday night during an “idea exchange” at Fenway Park.

Speaking to business leaders at the home of the Boston Red Sox, James said his goal is to remain authentic, whether it’s in his business relationships or his interactions with fans. The two-time NBA champion said he won’t endorse a product unless he likes it, and he won’t speak out on an issue unless he means it.

“The people, the consumer, they know what’s real and what’s fake,” said James, whose Cavaliers were in town for Friday night’s game against the Boston Celtics. “You cannot shortcut, you cannot cheat, because they will know.”

James has one of the top 50 Twitter followings, the biggest among U.S. athletes and second in the world only to soccer star Cristiano Renaldo. He cultivates it with the usual updates about what’s going on in his life — his newborn daughter couldn’t sleep the previous night — and also with thoughts on larger issues.

“My fans are part of the reason I am where I am today,” he said. “I’d love them to ride along this ride.”

James was one of the league’s most vocal critics of Los Angeles Clippers owner Donald Sterling, who was recorded making racist statements. James said there was no place in the NBA for Sterling, who was eventually forced to sell the team.

“I make decisions to speak about things when I have knowledge about it,” said James, who also spoke out after the 2012 shooting of Trayvon Martin. “Things that I feel passionate about, things that I feel my power and my voice can bring something to, I will speak out about it.”

Fans respond to James, according to SapientNitro Chief Marketing Officer Bill Kanarick, who moderated the panel with James and his business partner Maverick Carter. Each tweet he sends leads to 2,800 retweets or responses, Kanarick said; Justin Bieber, who has 56.7 million Twitter followers, has an average of 1,700 interactions per tweet.

“I don’t think there’s a selfish or commercial interest,” Kanarick said. “It’s a personal decision to connect with fans.”