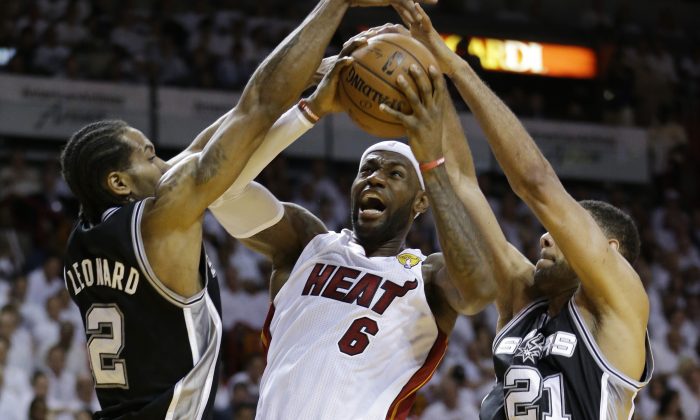 FILE - In this June 10, 2014, file photo, San Antonio Spurs forward Tim Duncan (21) and forward Kawhi Leonard (2) defend against Miami Heat forward LeBron James (6), during the first half in Game 3 of the NBA basketball finals in Miami. They've denied LeBron James winning two NBA titles, and in last year's Finals the Spurs dismantled the Heat, a beatdown that may have hastened the superstar's decision to re-sign with the Cavaliers. On Wednesday, Nov. 19, James faces his nemesis for the first time since June. By(AP Photo/Wilfredo Lee, File)
NBA Finals

The Cleveland Cavaliers sit at 7-7, beat the Wizards on Wednesday, and will play the Indiana Pacers on Saturday night. Here’s some of the latest buzz:

Has LeBron lost a step?

There’s speculation that LeBron James has “lost a step” since he’s returned to Cleveland.

Those arguments center around him being nearly 30 (his birthday is in December), playing so many minutes, and numerous playoff games on top of the regular season.

For many players, the mental and physical stress is too much.

“It takes a lot out of you that you can’t get back,” Milwaukee Bucks coach Jason Kidd told BleacherReport. “Just the mental grind takes time to recover from. And then if you’re handling the ball 50 percent of the time? Look at every guy who has had to do that and gone to multiple finals in a row—they’ve all broken down in some way. LeBron is the only one I can think of who hasn’t.”

Kyrie Irving said that he wants more responsibility on defense, and he wants to guard the NBA’s top point guards.

“Based on the lineup, whatever our team needs, if one person gets going whether it be the one or two, I’m going to guard them,” Irving said, via NBC. “It’s just more or less a personal challenge. It takes a team effort to guard everybody and for me, I’m either on the one or the two. We just have to figure that out….

“I told them that whenever I have a chance to guard the point guards, just leave me on him and we have our two guards guard the twos,” he added. “I just have to do the job at stopping the head of the snake.”

According to ProBasketballTalk, the Cavs have problems defending good point guards.

The Toronto Raptors’ Kyle Lowry scored 23 points and dished out 8 assists on Saturday night against Cleveland, while the Washington Wizards’ John Wall scored 28 points and had 7 assists. And before that, Denver’s Ty Lawson scored 24 points and dished 12 assists.

Cavs coach David Blatt has said that he won’t dish out criticism against James, despite the former four-time MVP being especially hard on himself in recent weeks.

“LeBron James is the greatest player that I’ve ever coached and I’ve ever seen,” Blatt said on Monday right before the Cavs demolished the Orlandio Magic.

“And he’s a man and a fine man, and I don’t pay a lot of attention to what’s being said and not being said,” Blatt said.

“Every day I wake up and I say thank goodness I get a chance to coach that guy. And I say to myself every day that I got a do a better job coaching that guy and help him to be everything that he is.”

Before that game, he said, “I’ve got to do a better job, and it will help our team.”