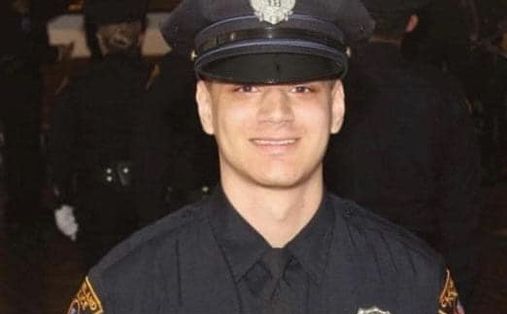 The family of slain Cleveland police Officer Shane Bartek has received an outpouring of support from the community following his tragic death. Bartek was shot twice when he was trying to stop a carjacking incident against him on the city's west side on New Year's Eve. (Photo courtesy Cleveland Police Department)
Crime and Incidents

With hints of snow in the cold Jan. 3 air over Cleveland, Ohio, there was sadness and somberness mixed into the atmosphere as well.

In a west Cleveland suburb, a mother was at the home of her 25-year-old son. She was on the phone doing something a mother shouldn’t have to do.

Debra Bartek, the mother of Cleveland police officer Shane Bartek, was talking with a cemetery trying to make arrangements for part of his funeral, his burial. She told The Epoch Times she wasn’t sure when that would be.

Bartek was killed about 6 p.m. on New Year’s Eve while trying to stop himself from being carjacked in the west Cleveland area of Kamm’s Corner, an Irish section with eateries, shops and a vibrant nightlife.

He was off-duty at the time and it isn’t known whether city officials will reconsider whether Bartek was acting in the line of duty. So far, they haven’t.

Bartek was approached in a parking lot of an apartment complex at 4320 Rocky River Drive in Cleveland by someone who wanted to carjack his vehicle, said Det. Alexander Sinclair.

The 2015 graduate of Berea-Midpark High School, who joined the Cleveland Police Department in 2019, was involved in a fight when he was trying to get a gun away from a suspect.

He was shot twice in the back and later died from his injuries at nearby Fairview Hospital.

Dozens of officers were gathered outside the hospital that evening waiting on word about his condition.

It was the second time that a member of the Bartek family serving as a law enforcement officer had been killed.

Bartek’s cousin, Cleveland police officer David Fahey, was killed by a hit-and-run driver while responding to a crash on Interstate 90 on Jan. 24, 2017.

Two suspects have been charged in connection to Bartek’s death.

Tamara Unique McLoyd, 18, has been charged with aggravated murder, a first-degree felony.

Police believe that Bartek was approached by someone armed with a gun and a struggle ensued when Bartek tried to get the weapon away from her.

Anthony Butler Jr., the second suspect, is currently jailed on a $5 million bond as he was charged with fleeing and eluding, a third-degree felony, and receiving stolen property, a fourth-degree felony.

Both McLoyd and Butler were later arrested following a chase on the Cleveland’s east side after Butler crashed Bartek’s car into a fence, according to police.

It is not known whether the pair is connected to recent carjackings that have happened in the Lakewood area in recent months.

Bartek’s death comes at a time when the city remains focused on social change while recovering from extensive riots in downtown Cleveland following the 2020 death of George Floyd at the hands of Minneapolis police.

Floyd’s death triggered riots in major cities throughout the United States, causing deaths and injuries to a number of law enforcement officers.

Last week, it was announced that the Cleveland Metropolitan School District is renaming seven of its schools named after patriots such as Thomas Jefferson, and Patrick Henry, who said “Give me Liberty, or Give Me Death.”

This past summer, ownership of the Cleveland Indians removed 120-year-old mascot Chief Wahoo after pressure from Baseball Commissioner Rob Manfred and Native American Groups who contended that Chief Wahoo was racist and an “offensive portrayal” of their people.

But through it all, during a time that many Clevelanders say is “exasperating nonsense,” the gritty, working-class Cleveland region along the shores of Lake Erie has displayed respect for law and order in the few days that have followed Bartek’s death.

It has perhaps mirrored Bartek on his job.

Bartek spoke to students at schools about being a police officer. He took a trip to Washington, D.C., and visited the memorials and monuments such as the George Washington Memorial.

The community also has come together with numerous fundraisers to help the family with funeral expenses including the Luna Team Shop in Cleveland selling shirts, and the Cleveland Police Foundation Heroes Fund.

In a statement issued by Bartek’s mother, the family said:

“Our family would like to express our sincere gratitude for the overwhelming show of love and support. Shane lived his life to the fullest. He will be missed forever.”

Police said the last Cleveland police officer killed was undercover Det. James Skernivitz.
Skernivitz, 53, and civilian Scott Dingess, 50, were sitting inside an unmarked vehicle when they were approached by three teenagers about 10 p.m. on Sept. 3, 2020, on the city’s West Side.
The trio was looking to rob someone of a gun, and fired 17 shots into the vehicle, killing both men, according to police.