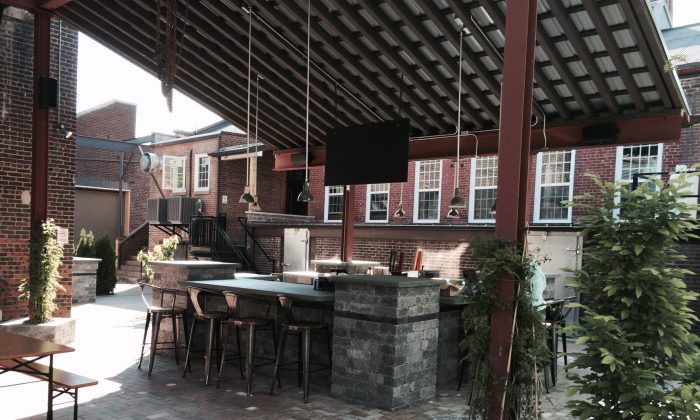 The bar in the beer garden at Clemson Bros. Brewery in Middletown on May 20, 2016. (Holly Kellum/Epoch Times)
New York

First Middletown beer garden opened on May 21
By Holly Kellum

MIDDLETOWN—It’s a young but growing garden, said Kenan Porter sitting outside Clemson Bros. Brewery the day before its new beer garden opened to the public on May 21.

Green bunches of what look like trumpet vines had started to creep up the poles of a metal-framed cover that cast checkered shadows on the brick floor.

A blue stone topped bar with eight beers on tap sits in the middle of several picnic tables, gas heaters, and a coal-fired BBQ pit. On the side facing the street is a row of metal bar stools under a blue stone ledge that doubles as a counter. At some point there will be a 20-foot screen along the west side of the garden for movie nights, Porter said. “We got other stuff on the horizon.”

Porter and his family have invested $2.3 million into the Clemson Bros. building, formerly a hacksaw factory, and turned it into a brewery, bar, restaurant, and several apartments that are now occupied.

They were hoping to bring bottling and distribution operations from Porter’s other business, Sabila Aloe, to the building as well, but funding from the state they applied for for equipment didn’t come through, or at least not entirely. They were awarded $215,000, about half of what they had asked for.

While aloe drinks are their main product now, Porter said they are hoping to expand into other non-alcoholic as well as alcoholic beverages, and if they had received the full funding, could have added 50 jobs to that side of the business and brought it to Middletown.

After trying to negotiate with the state, he turned down the $215,000.

We got other stuff on the horizon.
— Kenan Porter, Owner, Clemson Bros. Brewery

“Business 101 says if the deal changes, then we have to change the deal in its entirety,” he said. “If you cut funding, then the plan gets cut.”

Porter said they will continue to “fund everything internally” instead of looking for more outside sources.

What has really left a bad taste in the Warwick resident’s mouth is the unfriendly business climate in New York. He said even if they had gotten the money they asked for, “the state makes it very difficult. It’s almost as if they don’t want us to take advantage of it,” he said.

He said until New York changes to recognize the needs of businesses, that side of the business will remain out of state.

“If we were to bring all operations fully into New York, it would prevent us from growing,” he said.

He bought the mostly vacant and crumbling Cottage Street property in 2014 because “it was falling down but there was too much beauty to let that happen,” he said. He estimates they are almost half of the way through the renovations.

Clemson Bros. Brewery, which is owned by Porter and his dad’s Heritage Restoration Properties LLC, opened last October. According to their development goals they are ahead of schedule.

Part of the draw of the location was that it sits right along the Heritage Trail, a 10-foot wide paved path that runs along the old Erie Railroad track between Monroe and Goshen, with a planned extension through Middletown and into Wallkill. The county has taken lead agency on the project and is waiting for approvals from the state’s Department of Transportation.

“We expected the Heritage Trail to be here sooner but we’re not upset with the city,” Porter said. “Good things take time. Rome wasn’t created in a day.”

Till then they are working on enticing people with new features like their 7,500-square-foot beer garden and new drinks such as the mango pilsner they are developing.