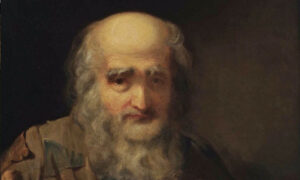 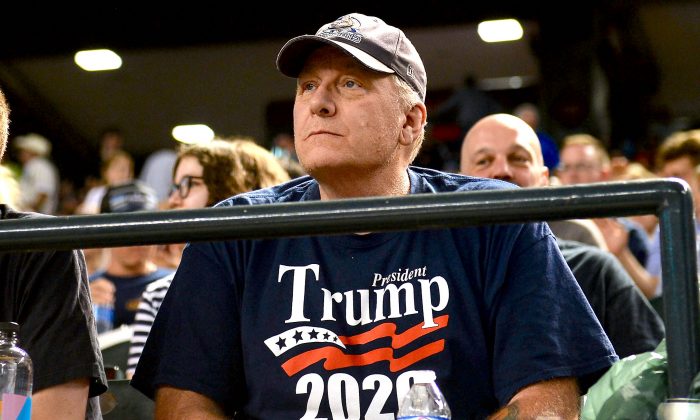 Schilling Called ‘Out’ at Red Sox Reunion. Were Conservative Views a Strike Against Him?

Just prior to Game 2 of the World Series on Oct. 24 seven members of the 2004 Boston Red Sox took the field for the ceremonial first pitch.

There was Pedro Martinez who pitched seven scoreless in a brilliant Game 3 performance that October. And of course, there was David Ortiz whose mighty bat helped propel the Red Sox to their first championship in 86 years.

But noticeably missing was pitching ace Curt Schilling. His performance in Game 6 of the American League Championship Series (ALCS) was critical to the Red Sox’s postseason run of 2004 and one of the best performances in baseball history. In the “bloody sock” game, Schilling dominated with seven innings of one-run ball, despite having had surgery on his ankle days before.

Schilling lives just 15 miles from Fenway Park, but apparently he wasn’t even invited. When asked by a fan on Twitter if the Red Sox asked him to join in the ceremony he replied, “Nope. No worries though…I get to keep my 3 rings and 3 trophies, so it’s all good.”

The Red Sox insisted the snub was unintentional, but Schilling’s relationship with his former team has cooled dramatically since that the Sox won the World Series in 2004. Following his retirement in 2009 his political views, not his legendary fastball, have made headlines.

Schilling is an unapologetic supporter of President Donald Trump, even wearing a “Trump 2020” shirt to a recent game in Arizona. He hosts The Curt Schilling Podcast on Breitbart News where he regularly sounds off against the left and stands up for conservative values. His social media accounts are filled with references to the Bible and pro-military and anti-abortion messages.

It has not gone well for his post-baseball analyst career.

In Aug. 2015 he tweeted a photo of Adolf Hitler that said, “It’s said only 5-10% of Muslims are extremists. In 1940, only 7% of Germans were Nazis. How’d that go?” ESPN suspended him from calling the Little League World Series game and then later for the rest of the 2015 MLB season.

In April 2016 he made a post on Facebook speaking in favor of a North Carolina law banning transgender people from using bathrooms and locker rooms that don’t correspond with their birth gender. He was fired from ESPN for the post.

The next month ESPN re-aired a “30 for 30” documentary called “Four Days in October” about the dramatic 2004 ALCS and cut all mentions of the historic “bloody sock” game.

ESPN said the edit was made to fit in the hour time slot. But the cut erased one of the most historic moments in baseball history, and certainly from that series.

In a country divided by politics, Schilling joins a growing list of high-profile stars seeing a backlash from supporting conservative viewpoints. Kanye West, another outspoken Trump supporter, was lambasted two weeks ago after he gave a 10-minute speech in the Oval Office with President Trump in attendance. Despite no weapons or violence being involved, MSNBC called it, “an assault on our White House.”

The rapper has collected 21 Grammy Awards and is one of the best selling artists of all time. But since coming out loudly in support of Trump he has faced intense media criticism and was even told not to wear his MAGA hat while filming Saturday Night Live last month.

In October 2017 actor Gary Sinise, known for his work in “Apollo 13” and “Forest Gump,” was announced as the grand marshal for the Tournament of Roses parade. Despite his long-standing work with veterans the pick was panned.

Sinise started Friends of Abe in 2004 to bring conservative voices in Hollywood together. That group held a fundraising event in July 2015 for then-candidate Trump. Critics claimed Sinise’s ties to the group and fundraiser made him unfit to be the grand marshall of the parade.

A spokeswoman for Sinise told LA Weekly the actor didn’t campaign for Trump, wasn’t involved in the event, and hasn’t run the organization for several years. He has made very few movies since.

For big-name stars like Clint Eastwood and Jon Voight—both of whom are pro-Trump—speaking up for conservative values has little effect on their ability to make movies in Hollywood. But for smaller stars, the backlash is real.

In a March 2017 interview with the L.A. Times a prominent actor, who asked not to be named for fear of professional reprisal, said, “There’s a McCarthyism coming from the left.”

He added there have been political shouting matches on the set of a show and one conservative producer was shunned by colleagues.

“In 30 years of show business, I’ve never seen it like this,” the actor told the L.A. Times. “If you are even lukewarm to Republicans, you are excommunicated from the church of tolerance.”

Correction: A previous version of this article incorrectly stated the name of the Red Sox pitcher. The pitcher was Curt Schilling. The Epoch Times regrets the error.