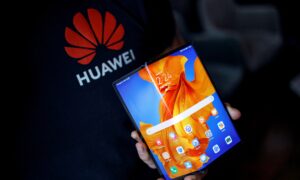 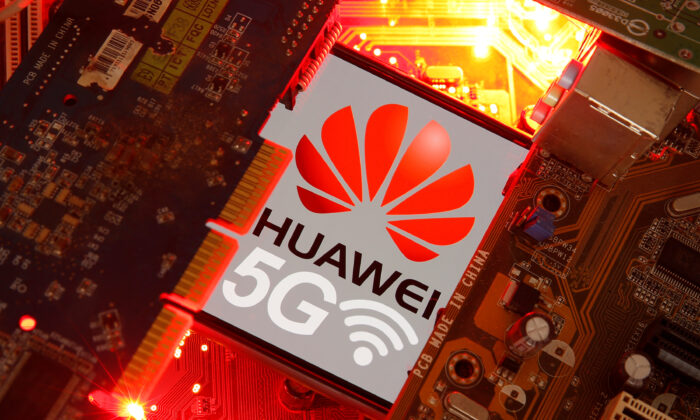 A smartphone with the Huawei and 5G network logo is seen on a PC motherboard in this illustration picture taken on Jan. 29, 2020. (Dado Ruvic/Illustration/Reuters)
UK

The British defense committee reported on Oct. 8 that there’s “clear evidence of collusion between Huawei and the Chinese state” and urged the government to urgently remove Huawei’s equipment from the country’s telecommunications infrastructure by 2025.

In July, Prime Minister Boris Johnson ordered that Huawei be purged from Britain’s 5G networks by 2027 amid fears of spying and sabotage, and following tough U.S. sanctions against the company affecting its supply of up-to-date chips.

The defense committee report, however, states that the purging should be done years earlier even if it involves recompense for current operators.

“The Government should take necessary steps to minimize the delay and economic damage and consider providing compensation to operators if the 2027 deadline is moved forward,” it states.

The defense committee report also states that the 5G rollout will increase mobile connectivity dependence, leaving the country more vulnerable to “espionage, sabotage, or system failure” but as yet with “no global rules regulating international cyber-attacks.”

The report urges the government to partner with allies on a system to hold “perpetrators” accountable.

Democracies should also form a “D10” alliance of top world democracies as a counter to China and other nondemocratic countries with malign intent, it stated.

“The Committee support the proposal to form a D10 alliance, consisting of ten of the world’s largest democracies, in order to provide alternatives to Chinese technology and to combat the technological dominance of authoritarian states.”

“The Government must act swiftly and outline a joint 5G policy as soon as possible,” the report stated, and “continue to denounce and deter threats from adversarial states, such as Russia and China.”

It stated that the proposed Telecom Security Bill should be introduced into law before the end of the year and called on the government to explain why it isn’t already deploying a “cyberattack capability to deter aggressors.”

Commenting in the Telegraph on Oct. 8, Tobias Ellwood, chairman of the committee, said the UK’s “growing dependence on an online world has created a virtual theatre of war where we have become increasingly vulnerable.”

“Online espionage and sabotage are the new battlegrounds we must prepare for and defend against,” he said.

“Our international rules-based order was crafted in a pre-digital age, but a major cyberattack, for example, could cause more harm than a dirty bomb but would not technically trip a NATO Article 5 response.”

Ellwood’s comments are reflected in Defense Secretary Ben Wallace’s observations on the need for the military to modernize in response to the threat of cyber warfare.

When speaking about cyber defense to ConservativeHome for the virtual Conservative party annual conference that ended on Oct. 6, Wallace said NATO is “still quite focussed on tank brigades, air squadrons, and ships” as a method of countering adversaries “as if mass on its own is somehow the solution.”

“It’s not just about sitting in a static bunch of armored brigades waiting almost like you are a modern Maginot line waiting for somehow this great force to come out of the trees when in fact they’ve gone round you,” he said.

“There’s a modernization program going on at the moment that … recognizes that’s how we need to change,” he added.

Huawei has repeatedly denied collusion with the Chinese state and didn’t immediately respond to a request by The Epoch Times for comment.