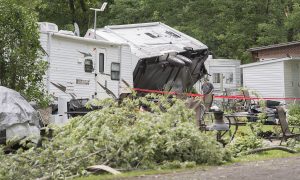 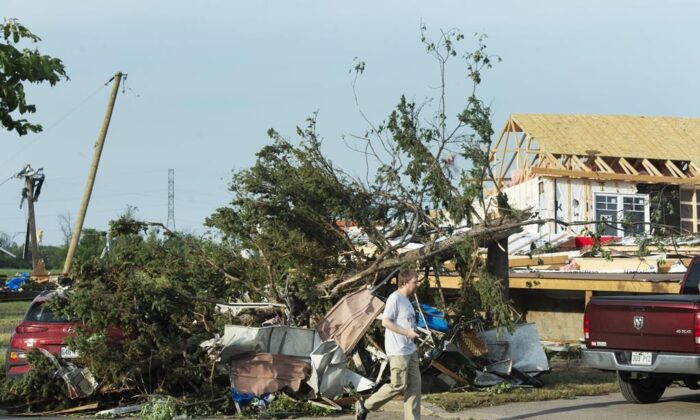 A man surveys the damage after a tornado touched down in Mascouche, Que., northeast of Montreal, on June 21, 2021. Dozens of homes were damaged and one death has been confirmed. (The Canadian Press/Ryan Remiorz)
Canada

MASCOUCHE, Que.—A Quebec town just north of Montreal is cleaning up today after a tornado tore through the community Monday afternoon.

A man died after taking shelter in his shed in Mascouche, Que., while two other people were injured when the tornado touched down.

Environment Canada says a thunderstorm cell around 3:45 p.m. generated a tornado in a residential neighbourhood, causing injuries and destruction.

Meteorologists who surveyed the damage Monday evening say their preliminary findings suggest the tornado’s maximum wind speeds clocked in between 180 kilometres per hour and 200 km/h, consistent with an EF2 tornado.

Mascouche Mayor Guillaume Tremblay said late Monday the city was caught off guard by the twister, but its emergency response plan was quickly put into action and worked well.

He said he began receiving calls about a tornado around the same time meteorologists spotted it.

“We often have violent thunderstorm watches in our city, but from that to talking about a tornado, I think no one knew that this would happen,” Tremblay said.

A spokesperson for the town says nearly 100 buildings were damaged.

The weather agency said in a summary published Tuesday morning that “houses were damaged, trees were broken and objects thrown over nearly three kilometres.

The Red Cross had said it was preparing to help between 50 and 100 people access food, clothing and temporary shelter. The agency says far fewer people will be requiring assistance going forward.

Environment Canada had issued severe thunderstorm watches for many areas of southern and central Quebec on Monday because of high humidity and high temperatures. The agency says damage reports from other parts of the province are being analyzed.