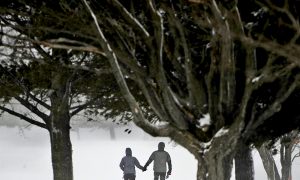 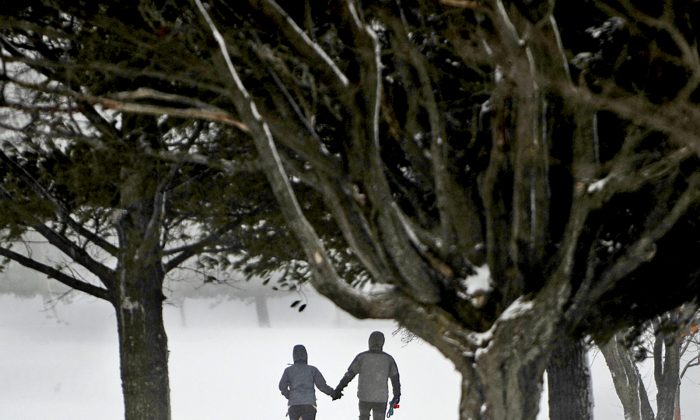 A couple take their dog for a walk on the trails through the Watertown Golf Club in Watertown, N.Y. on Thursday, Nov. 20, 2014. A new blast of lake-effect snow pounded Buffalo for a third day piling more misery on a city already buried by an epic, deadly snowfall that could leave some areas with nearly 8 feet of snow on the ground when it's all done. (AP Photo/The Watertown Daily Times, Amanda Morrison)
New York

BUFFALO, N.Y.—Beth Bragg’s home was spared the worst of a lake-effect storm that buried parts of the Buffalo area under more than 7 feet of snow. So why was she out first-thing Saturday with her shovel?

“I know that people really need to get shoveled out, especially some of the older folks, so I’m just doing my part to help out,” said Bragg, a bank manager joined hundreds of other volunteers in a “shovel brigade.”

The weekend offered the region a chance to dig out before a flood watch was to take effect Sunday afternoon amid rising temperatures and rain. All around, Buffalo was living up to its nickname, “The City of Good Neighbors.”

“They’re like angels,” said Kevin Masterson, 61, after a handful of volunteers swarmed in to free his and his brother-in-law’s cars from the drifts. “I was out shoveling and … all of the sudden I had all these people.”

One of the volunteers, Greg Schreiber, said he’d keep gong “until the back gives out.”

Seneca Street in south Buffalo was jammed with dump trucks, military vehicles and front loaders rumbling through the streets as they hauled away the canyon walls of snow.

“It’s just a war zone here,” said Eric Ginsburg, standing outside of his store, Ginzy’s. “All the military here, the police. It’s just crazy. Most snow I’ve ever seen.”

With roughly the equivalent of six inches of rain tied up in the snowpack, the National Weather Service issued a flood watch for 1 p.m. Sunday through 7 a.m. Wednesday, with temperatures forecast to be near 50 degrees on Sunday and near 60 on Monday.

Weather Service meteorologist Jon Hitchcock said there might be trouble with drainage as snow and the uncollected autumn leaves underneath block catch basins.

“We are preparing now for more flooding than we’ve seen in a long, long time,” said Gov. Andrew Cuomo. He said the state was sending in pumps, boats, helicopters and high-axle vehicles that can operate in 4 to 5 feet of water.

“If we’re lucky we won’t need any of it,” Cuomo said. “But prepare for the worst and hope for the best.”

The snow, which began falling late Monday and finally cleared out of all areas by daybreak Friday, remained a huge challenge.

Officials urged people to put off nonessential travel so snow removal efforts could progress. The state Thruway, however, was fully reopened Saturday — four days after 132-mile stretch had to be closed because of the massive snowfall that left a number of motorists stranded.

The storm has been blamed for at least a dozen deaths and more than 30 major roof collapses, most involving farm and flat-roof buildings. Authorities warned that rain forecast for Saturday and Monday would add to the weight and strain on buildings.

After Margie Page, 81, paid $600 to have the snow cleared from the roof of her mobile home in suburban Cheektowaga, a group of volunteers from Mennonite Disaster Service arrived at the mobile home park ready to go to work.

“I should have waited,” Page said, “but I was so afraid of my roof collapsing. I was so anxious to get it done.”

From The Associated Press. AP Writer Carolyn Thompson contributed to this report.