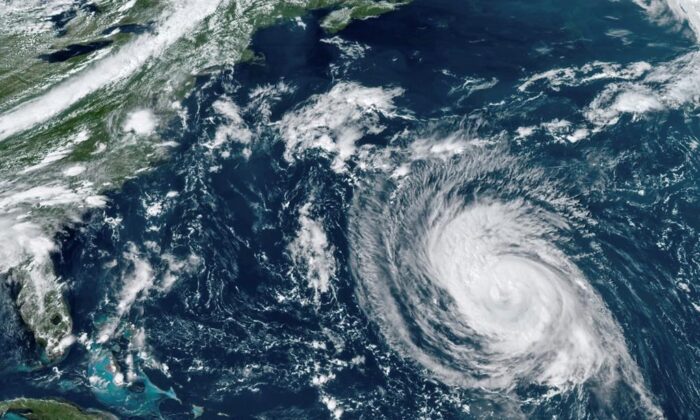 Hurricane Larry in the Atlantic Ocean in a satellite image on Sept. 8, 2021. (The Canadian Press/AP-NOAA via AP)
Science News

A new study suggests that the successful efforts in North America and Europe to reduce air pollution have led to an unintended consequence—more hurricanes.

The “surprising result” was found by Hiroyuki Murakami, a physical scientist at the National Oceanic and Atmospheric Administration (NOAA). In his paper, published in the journal Science Advances, Murakami said he studied hurricane trends in the Northern Hemisphere over the past 40 years and discovered a connection between the number of hurricanes and the amount of air pollution in the form of tiny particles called aerosols.

Almost 90 percent of aerosols released into the air have natural origins such as volcanoes and forest fires, while the remaining 10 percent come from human activities, such as manufacturing cement and burning coal. The NOAA study examines data from two periods: 1980 to 2000 and 2001 to 2020, during which North America and Europe significantly cut their output of human-caused aerosols.

According to the study, a 50 percent decrease in human-caused aerosol pollution from 1980 to 2020 has contributed to a 33 percent increase in storm formations in the Atlantic Ocean. The idea is that when there are fewer pollution particles to reflect the sun’s energy back into space, water will get warmer and act as fuel for hurricanes.

“Without significant amounts of particulate pollution to reflect sunlight, the ocean absorbs more heat and warms faster,” NOAA said in a May 11 statement. “A warming Atlantic Ocean has been a key ingredient to a 33 percent increase in the number of tropical cyclones during this 40 year period.”

Murakami also found that as Asian air became dirtier, the area also experienced fewer typhoons. “In this case, a 40 percent increase in the concentration of particulate air pollution has been one of several factors that has contributed to a 14 percent decrease,” he said.

“This study indicates that decreasing air pollution leads to an increased risk of tropical cyclones, which is happening in the North Atlantic, and could also happen, if air pollution is rapidly reduced, in Asia,” Murakami said. “The ironic result suggests the necessity of careful policy decision-making in the future that considers the pros and cons of the multiple impacts.”

The study comes as the United States braces for the official start of the Atlantic hurricane season, which runs from June 1 to Nov. 30. The National Hurricane Center, an agency within NOAA, began its daily tropical outlook forecasts on May 15.

According to NOAA, the 2021 Atlantic hurricane season recorded 21 named storm systems, of which eight hit the U.S. coast. The 2020 season had a record-breaking 30 named storms, of which 14 grew into hurricanes.