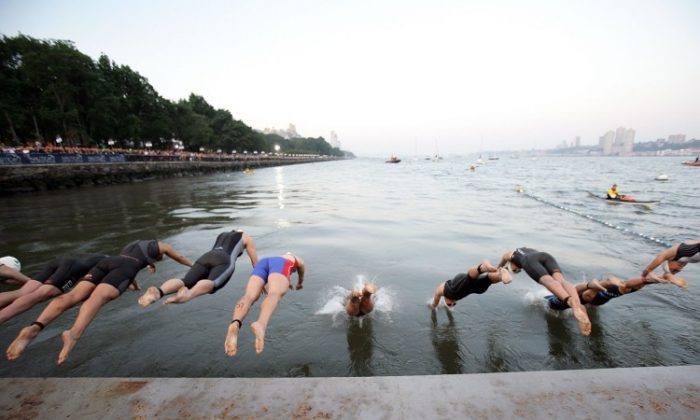 The old Hudson Falls General Electric Plant on the banks of the Hudson River near Glen Falls, N.Y., is seen in this file photo. PCB oils used in the manufacturing of industrial capacitors at the plant seeped into the Hudson River during a period before 1977, when PCB materials were considered to be safe. (William Waldron/Newsmakers)
US

Forty years ago this week, Congress passed landmark legislation that forced water quality standards on industry and changed the way Americans treat their rivers and wetlands.

The Oct. 18, 1972, passage of the bipartisan Federal Water Pollution Control Act Amendments of 1972 became the cornerstone of what would become the Clean Water Act (CWA).

“This bold legislation put forward by visionaries in Congress returned control of our nation’s waterways to the citizens of the United States as part of the public trust,” stated Robert F. Kennedy Jr., president of the Waterkeeper Alliance, in a statement marking the 2011 anniversary of the law.

Water pollution had become so prevalent in cities across America in the mid-20th century that Ohio’s Cuyahoga River caught fire in 1969, which historically was one of its milder blazes, according to the Cleveland State University Department of History.

Called one of the most polluted rivers in the United States in the 1960s, the Cuyahoga had burned repeatedly since the 1930s. By the late ’60s, industry along the river was beginning to diminish, so fires were not as severe as they had been.

A picture of a boat engulfed in flames from a worse 1952 fire made the cover of Time magazine in 1969 in a report on the smaller fire. Oily industrial runoff fed the flames, and dismay over the idea of a burning river fed public calls for protecting waterways.

New York’s Hudson River—historic, iconic, and so beautiful that a school of landscape painters is named for it—was once treated as a garbage can.

“Decades ago, I used to swim past factories and refineries dumping polluted waste right into Boston Harbor, and I dodged sewage and oily runoff in New York’s Hudson River … Today, our waters are far cleaner,” wrote Peter Lehner, executive director of the Natural Resources Defense Council, on the NRDC staff blog. “Industry has to follow strict guidelines for discharges and cities have cut down on sewage overflows. The last time I went swimming in the Hudson, the river felt fresh and bracing.”

The Hudson River is no longer subject to raw sewage and industrial discharge, but is still one of the largest Superfund sites in the country, contaminated with Polychlorinated biphenyls, or PCBs.

For 30 years, until 1977 when the EPA banned the chemical, General Electric sent about 1.3 million pounds of PCBs into the Hudson, according to the EPA. Capacitor plants in Fort Edward and Hudson Falls, N.Y., used the chemicals, which accumulate in tissue and cause cancer.

PCBs are the reason 200 miles of the river, from Hudson Falls to the Battery in New York City, are designated a Superfund site. The river is not cleaning itself of PCBs, so contaminated silt is being removed.

Due in large part to the Clean Water Act, both the Hudson and Cuyahoga are not on the list of endangered rivers kept by nonprofit conservation group American Rivers, and are considered safe for swimming.

Kennedy warned that waters are still threatened, and the legislation is being challenged. “Despite the fact that the Clean Water Act has been responsible for providing millions of Americans with opportunities to swim, drink, and fish in clean water, every branch of our federal government—the legislative, executive, and judicial—have taken aim at the Act,” he wrote.

In Kennedy’s opinion, some members of Congress are so amenable to the wishes of industry that they ignore the public good. He accuses legislators of having proposed “bills, amendments, and budget riders to gut the Clean Water Act and jeopardize the environmental health of our waterways and the lifeblood of our communities across the country, all without public debate,” Kennedy stated.

Keeping waterways clean is a collaborative effort. “The absolute best path forward is partnership—among all levels of government, the private sector, nonprofits, and the public. It is only because of partnership that we made so much progress during the past 40 years, and it is partnership that will lead to more progress over the next 40 years,” wrote Nancy Stoner, acting assistant administrator for EPA’s Office of Water, in a statement on the anniversary.