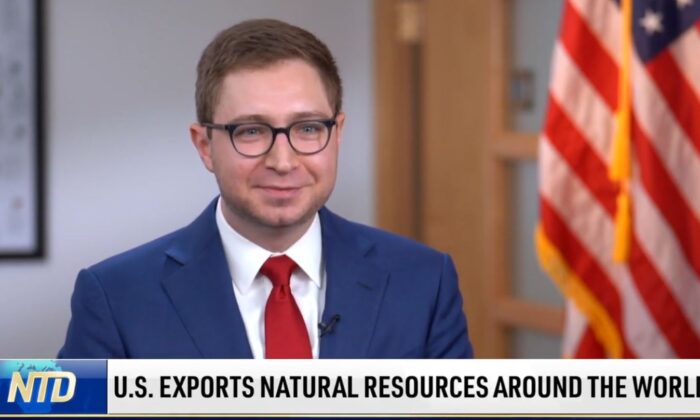 Alex Fitzsimmons, former deputy assistant secretary in the Office of Energy Efficiency and Renewable Energy during the Trump Administration. (NTD/Screenshot via The Epoch Times)
Economy

Federal permitting process 'needs to be modernized'
By Ella Kietlinska

There is no need to choose between environmental protection and producing clean energy at low cost, as both can be achieved, said Alex Fitzsimmons, former deputy assistant secretary in the Office of Energy Efficiency and Renewable Energy during the Trump administration.

“The U.S. is the number one reducer of CO2 [carbon dioxide] emissions in the world. And of course, there’s a lot more we can do. And the only way we can do more is by investing in a broad range of clean energy technologies,” Fitzsimmons told NTD’s “Capitol Report” program in an April 15 interview.

To produce affordable, reliable, and clean energy at home in the United States—which is a goal shared by most, Fitzsimmons said—we need to invest in a broad portfolio of clean energy technologies, “everything from fossil fuel power plants with carbon capture, natural gas, advanced nuclear power, clean hydrogen, and of course, wind and solar, and energy storage as well,” he said.

“The federal government should be focused on creating a level playing field for all technologies to compete equally,” he said. “That means investing in more innovation. That also means investing in modernized permitting processes that don’t tilt the scales towards one technology over another.”

The investment should come from both the private sector and the public sector, Fitzsimmons pointed out.

The Trump administration focused on a pro-growth energy strategy to maximize the resources that the country possesses, Fitzsimmons said.

The United States has become the number one producer of oil and natural gas in the world, “something that nobody thought was possible 10 years ago,” the former official said. “We’re exporting our liquefied natural gas [LNG] to more than 37 countries around the world.”

It happened because the country invested in more innovation and in streamlined permitting processes, which encouraged producers in the United States to drill more at home, thus avoiding reliance on foreign adversaries, Fitzsimmons explained.

“Critical minerals are vital to modern society. They are in our smartphones, our laptops, our clean energy technologies, and they’re also used for a variety of national security purposes.”

“Unfortunately, our critical mineral supply chains are largely controlled by foreign adversaries, including the Chinese and Russian governments,” he said.

“The U.S. is import-reliant on 30 of 35 critical minerals, and we have zero production capacity for 14 of those minerals.”

To ensure energy security and national security, the United States should invest in all parts of the supply chain of critical minerals, including the upstream processing and the midstream separations and processing capabilities, the former official said, “which is something that we focused on a lot when I was working on critical minerals in the Trump administration.”

Fitzsimmons provided an example of cobalt, a critical mineral, most of which comes from Congo.

“China has been buying up mines in the Congo for years,” Fitzsimmons said. “And even if China does not control the mining process, they control the midstream separations and processing capability for cobalt and for most critical minerals.”

Even if the United States invests in mining abroad but does not invest in domestic processing capability, it will just be moving the supply chain vulnerability somewhere else because an adversary controls it abroad, Fitzsimmons said.

“Unfortunately, we have a federal permitting process that needs to be modernized,” he pointed out. “It should not take 10 years or more to permit projects that are in the national interest of the United States. But that’s the current situation that we find ourselves in.”

Moreover, mining of critical minerals in African and Asian countries is often accompanied by human rights abuses and environmental degradation that are hidden from the public view, Stein wrote for the Committee for a Constructive Tomorrow.