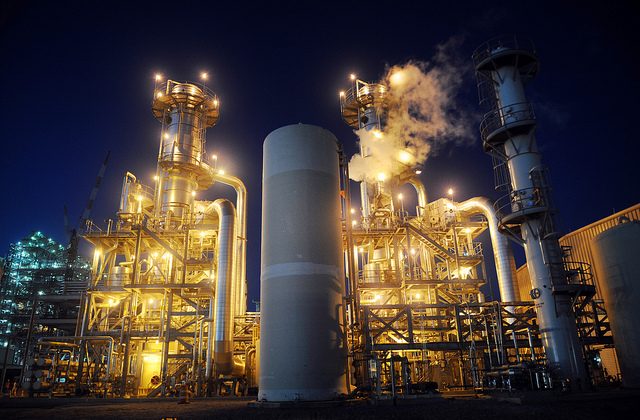 Crystallizers at the water treatment plant of the Kemper County Energy Facility in Mississippi in December 2014. Water at the facility is used in many of the coal power generating processes. (Courtesy of Mississippi Power)
US

There is no foreseeable benefit to the Clean Power Plan, according to Peabody.

A Peabody press release responding to the finalized rule said the administration is forcing utilities to adopt renewable energy, but points out that over $85 billion in subsidies have already been invested over the past 60 years, and wind and solar still only provide 5 percent of U.S. electricity.

There is no foreseeable benefit to the Clean Power Plan, according to Peabody; and it “will punish American families and businesses with higher energy costs and damage electric reliability.” It cites increased electricity rates in the United States at twice the pace of household incomes since 2000.

But Peabody has an alternative answer to this crisis: high efficiency, low emissions, supercritical coal plants, which operate at temperatures and pressures above the critical point of water, resulting in carbon dioxide emission reductions that are 25 percent lower than the oldest coal plants in America. Every new, large, supercritical plant offers the equivalent carbon benefit of removing 1 million cars from the road, stated the release.

Peabody’s four-point plan proposes to improve the efficiency of existing plants and utilize more supercritical coal plants, with technologies that will drive key emissions rates 75 percent lower than the U.S. coal fleet average. It will insist on low-cost electricity and increase research and development of next generation coal technologies.

Existing plants can be retrofitted with post-combustion carbon capture and storage systems. The technology is capable of capturing up to 90 percent of carbon emissions, preventing it from entering the atmosphere, according to the Carbon Capture and Storage Association website.

But implementing carbon capture raises investment costs and reduces the quantity of useful electricity, according to the Center for Climate and Energy Solutions (c2es), a nonprofit organization that advances strong policy and action for climate and energy challenges.

It notes that additional generation would be required to power capture equipment, while also decreasing the net power output by as much as 30 percent. While the cost to upgrade an existing system is about $36 million compared to more than $2 billion to build a new system, the changes in the cost of electricity reduction are minimal at less than 1 percent to 1.4 percent. In addition, the savings varies from plant to plant, thus there is no one-size-fits-all solution, according to a 2014 National Energy Technology Laboratory report.

A number of advanced coal combustion technologies have already been developed to improve the efficiency of coal plants. The World Coal Association estimates that deploying advanced technology “could cut two gigatonnes of carbon emissions,” which is equivalent to India’s annual carbon emissions.

The technology turns coal and other carbon-based fuels into a synthesis gas, then removes the impurities from the gas before it is combusted. But, a carbon capture system would still have to be added, or with some technologies the carbon can be transported via a pipeline.

The primary option for storage is injecting carbon into geologic formations deep underground. The c2es reports that carbon will likely be stored safely and permanently with a combination of regulations and the technology.

Alvarez said the IGCC only needs to capture approximately half of the carbon to meet the new climate rules, but the question is the cost involved. “With few IGCCs built and not many under construction, costs have not yet dropped. In principle, IGCC is more complex than pulverized coal and other clean coal technologies,” he said.

The cost of the new Kemper IGCC plant in Kemper County, Miss., was up to $6.17 billion in February, according to industry news website Utility Dive.

Peabody criticizes renewable energy sources for being overly expensive, putting a strain on America’s economy, jobs, and households. This sentiment has been touted by Peabody since at least 2014 when it launched a campaign called “Advanced Energy for Life,” calling for low-cost energy.

In 2014, Peabody had called “global energy poverty the world’s number one human and environmental crisis.” The campaign sought to educate world leaders and the general public on the benefits of advanced coal technologies as a means for increased access to reliable, low-cost power.

At that time, Peabody accused the United States of “regulatory overreach that would lead to premature retirements and skyrocketing electricity rates.”

Now, Peabody cites soaring electricity costs and economic harm in California as an example of renewable energy policies disrupting the power grid. In early July, California officials voted to raise electricity rates for millions of residents to even out the rates between those who use less electricity and those who use more, according to a USA Today report.

California has been experiencing an energy crisis since 2000 after divesting itself of power generation plants via a deregulation bill in 1998. The action resulted in an electricity supply crisis in 2000, and the largest planned blackouts since World War II, according to a PBS Frontline timeline.

In 2001, Southern California Edison and Pacific Gas & Electric customers were forced to pay emergency rate hikes of 7 to 15 percent.

A decrease in dispatch of coal-fired generation would require a change in the way the grid is controlled.

The Federal Energy Regulatory Commission (FERC) agrees that renewable energy could disrupt the power grid. In a February 2015 report titled “The Clean Power Plan Endangers Electric Reliability,” FERC noted that a decrease in dispatch of coal-fired generation would require a change in the way the grid is controlled and monitored. “It could have many unintended results and will likely lead to increased costs while reducing reliability,” the report stated.

In response to concerns about grid reliability, the Clean Power Plan was adjusted to provide states an additional two years to develop compliance plans and carry them out, as well as a number of other compromises.

The American Public Power Association (APPA), a membership of more than 2000 community-owned electric utilities, stated in an August 4 press release that it is pleased with the changes. Previously, the association was concerned that the new rule was expecting too much too soon by requiring tight deadlines in order to meet the goals without providing a safety net.

Utilities also applauded the final rule that added a program for renewable energy credits, and guidance for interstate trading, saying it gives them more flexibility.

Despite these changes, the APPA is still concerned about rate increases for consumers. It criticized increased carbon reduction targets for some states (including Illinois, Kentucky, Nebraska, West Virginia, and Wisconsin), which would make compliance more difficult and expensive, and possibly burden consumers with much higher rates.