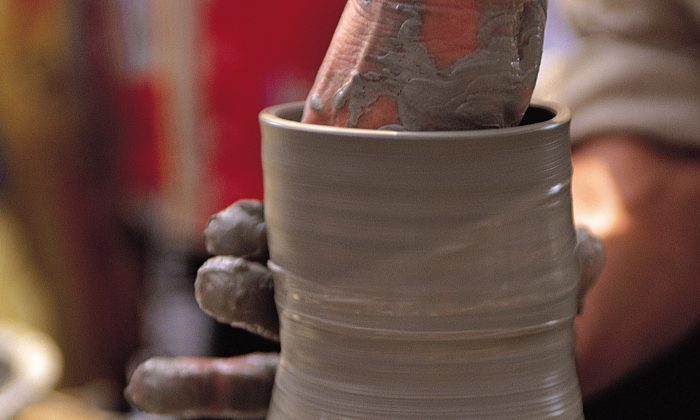 As clay vases are being made, vibrations of surrounding sounds may be recorded on the clay. (Photos.com)
Beyond Science

When Frenchman Édouard-Léon Scott de Martinville completed the first trial recording on April 9, 1860, his pretensions were a long way from leaving a sound trace that could be reproduced by future generations.

The investigator’s labors were limited to capturing sound waves of the human voice and expressing them in a visual form on cloudy paper; he never imagined that those frequencies imprinted by his “phonautograph” would be reproduced at another time.

In 2008, Scott’s recordings could be listened to thanks to a complex information program developed by the United States Library of Congress.

Those voices that Scott had believed lost in the “biodimension” of the paper surface once more stirred the ethers in the study of recording, bringing with them an ancient French melody in the form of a woman’s voice.

The audible fragment, barely 10 seconds long, was brought back to life one and a half centuries after its death.

Many scientists theorize about the possibility of reproducing sounds printed by accident on a smooth surface, similar to what happened in the case of Scott’s phonautograph.

In fact, there is a “myth” widely publicized about the possibility of recapturing voices from ancient ceramic vases that had picked up vibrations while their clay was still fresh.

To decorate a vase with spiral patterns, a craftsman might scratch the surface lightly with a straw when the wet ceramic is turning on the wheel. As an inadvertent consequence, the model would collect sound waves from the surroundings. The piece of straw may in this way be tracing an “audio trail” on the clay.

The later recuperation of those sounds using modern technology is part of a legend debated among specialists.

Can a vase record sounds from its surroundings while being scratched by a vibrating instrument? Furthermore, is science capable—or will it be capable—of reproducing such recordings?

The history of recording sounds by scratching the surface of an object goes back to 1888, when Thomas Edison collected sounds on a sheet of metal, and later in cylinders of beeswax. But these events are part of the history of “conscious” recording, following the “unconscious” recordings made by Scott, and probably much later than involuntary recordings that artisans and watchmakers could have made in their works.

The reproduction of sounds from turning vases was an experiment conducted through numerous opportunities, but with unclear results.

Richard G. Woodbridge, an investigator whose work appeared in the Proceedings of the IEEE in 1969, affirmed having reproduced the sound of a 60-hertz motor while he modeled his vase.

In another experiment, Woodbridge said he had discovered traces of music on fabric exposed to vibrations, while he painted on it with blue paint. The investigator even said he had searched for and found the word “blue,” shouted by himself when the brush moved.

When the investigators from “MythBusters,” a popular American television program, conducted tests on clay vases in 2006, they could obtain little more than acoustic gibberish, nothing recognizable as a human voice. However, the sounds were picked up on a precarious crystal needle, a scarcely dependable method if authentic sound reproduction is desired.

Moreover, as discovered by Swedish acoustics professor Mendel Kleiner, the turning of the potter’s wheel must reach high-speed revolutions to capture the vibrations exactly.

The exploration of acoustics began with a thorough study of science fiction. Nevertheless, reading ceramic vases is a milestone.

As many experiments have demonstrated, a sound vibration on a rudimentary element (like a straw) that scratches a smooth surface (like mud or paint) will probably always be overshadowed by strong vibrations, such as the pulse of the artisan.

This is not to say, however, that reproduction is not possible. The answer perhaps lies in a more developed technology, in the manner of “optical reading” (similar to laser reading) instead of the clumsy scratching of a needle on a microscopic indentation.

Seen from a certain perspective, the world could be found to be full of acoustic records of other times; we only need the means to retrieve them. If the “vessel hypothesis” turns out to be true, with a considerably superior technology we would be able to reproduce the sounds captured in millions of brush strokes throughout history on walls, oil paintings, pottery, and other creations.