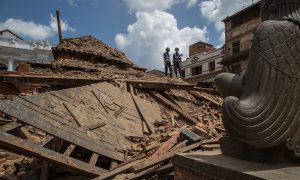 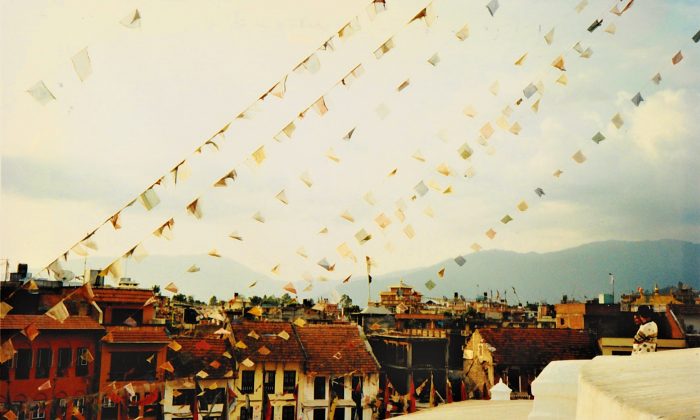 Classquake: What the Global Media Missed in Nepal Earthquake Coverage

As the world comes to terms with Nepal’s earthquake and media outlets start shifting their gaze elsewhere, it is worth analyzing how the global English media covered the disaster – and what they missed. This was a “classquake” as much as a natural disaster, a point missed amid the dramatic descriptions and heart-rending videos.

The media’s attention to Kathmandu valley and Everest was as much a product of orientalism, that is, the West’s patronizing or romanticized perceptions of “the East,” as it was a reflection of disconnect between the capital and the (non-mountaineering) hinterland.

As attention turned from immediate description to questions of causation, reporters were quick to point out, correctly, that the earthquake was not unexpected, but rather was a “nightmare waiting to happen.”

Since it is “buildings that kill people not earthquakes,” the question became: why was Nepal unprepared?

Unlike in the case of Haiti, no one evoked supernatural curses or blamed “progress-resistant cultural influences” to answer this question, although Sumnina Udas of CNN claimed that simply “no one believed it would happen.”

For most media commentators, however, it was not disbelief in expert predictions that stalled preparation, but rather poverty and politics.

In many of the articles, any analysis of poverty was overshadowed by a focus on Nepal’s other disaster, namely the state’s last 24 years of unstable governments, a Maoist insurgency, royal massacre, and unproductive constitution writing process.

Surya Subedi, a professor of international law writing for CNN, described a “country ruined by political mismanagement.” Political instability produces a weak state unable to plan and manage its cities, and enforce its building codes, which in turn leaves people to fend for themselves in times of disaster, as reporter Rishi Iyengar argues in Time magazine.

The Science Behind the Nepal Earthquake

While there is no doubt that poverty and political instability are central factors in this disaster, the media’s emphasis on these factors obscures what this earthquake teaches us about structural inequality.

As the geographer Neil Smith reminded us after Hurricane Katrina, disasters “deepen and erode the ruts of social difference they encounter.” In the case of Kathmandu, taking account of which buildings and neighborhoods were left standing and which were not exposes the already established ruts of social disparity. Moreover, one can easily expect the earthquake’s aftermath to exacerbate inequality.

Jason Burke’s piece in the Guardian, for one, did highlight the shared poverty of victims of the quake. A stark contrast exists between the inhabitants of collapsed houses and those in residences still standing. Whether in Kathmandu valley or the villages of the hills and mountains, the older houses consisting of mud mortar, bricks, and timber posts crumbled whereas the newer buildings made of reinforced concrete, cement plaster, and steel pillars, by in large, withstood the jolts. Living in those fragile mud houses are the rural poor, and the indigenous Newar and recent rural-to-urban migrants who cannot afford to rent or buy new houses outside of the congested urban cores or peripheral agro-towns of Kathmandu valley. In other words, it was a classquake.

The History of Endemic Poverty in Nepal

To understand the division between rich and poor houses in Nepal requires more than passing references to endemic poverty and cursory summaries of the country’s recent political history. In my research on housing in Kathmandu I have found Nepal’s economic history to reveal much about contemporary disparities. Mahesh Chandra Regmi’s book Thatched Huts and Stucco Palaces identified the roots of Nepal’s inequality in the land policies of the Rana state (1846-1951). The palace-residing Kathmandu aristocrats gifted land to politically loyal nobles, who in turn, became landlords to the tenant cultivators living in huts.

The land reforms and urban planning of post-Rana Nepal (1951-1990) were unable to compete with soaring property prices produced through an unregulated market and massive migration into the capital and Tarai lowlands. While the hill districts remained under-developed, the selective benefits of the privatized garment, tourism, development and education industries remained limited to the capital city.

Consequently, a Kathmandu middle class emerged desiring the “modern” houses of reinforced concrete outside of the urban core.

The ensuing decades of frequent political shifts and Maoist insurgency only contributed to the market’s dominance over social needs. Despite the government’s promises of development to mitigate the growing popularity of the Maoists, neo-liberal policies and violence led to capital flight by foreign garment companies, not to mention the country’s growing foreign debt.

The Wealthy Protect Themselves in New Homes

Financed by a burgeoning private banking and real-estate industry, urban middle and upper classes have flocked to high-rise apartments, luxurious housing colonies and compounds in the suburbs. In turn, the middle classes able to build multi-story concrete houses (usually starting at $60,000 USD in construction costs) have become the new landlords as they inhabit the top floors of their homes while earning income renting out the bottom floors.

Nepal’s national building code is a perfect example of the growing disparity between Nepal’s rich and poor classes. Drafted in 1994, the code was not enacted for nine years, until 2003. As of Saturday’s quake, only three (Kathmandu, Patan, Dharan) of Nepal’s 58 municipalities had adopted the code as mandatory in the house-building permit process.

I do not doubt that corruption and party infighting played a major role in the delay and partial implementation of the code, but we should also consider how growing real estate and construction industries benefit from an ineffective code. A lack of regulation allows companies to market earthquake safety as a selling point rather than a requirement. Worse yet are the developers who promise code compliance to homeowners, but then bribe inspectors in order to take cost-saving short cuts.

Those who could afford the suburban compounds, high-rises and housing colonies could also afford electricity generators, private water supply, and most importantly, builders trained in earthquake-preventative construction. In last week’s earthquake, even those in less secure reinforced concrete structures were far better off than those in mud masonry buildings. The concrete houses that fell tended to be in the denser and poorer neighborhoods, such as the hotels of Gongabu catering to migrant laborers waiting to go abroad.

As Nepal rebuilds, it will be necessary to ensure that preventative building practices are followed not only in the elite residences of Kathmandu, but throughout the country. Thinking beyond Nepal to the next “disaster,” it will also be critical for global media to draw attention to the structural inequalities at the core of disasters.

Andrew Nelson is Lecturer of Anthropology at University of North Texas. This article was originally published on The Conversation. Read the original article.