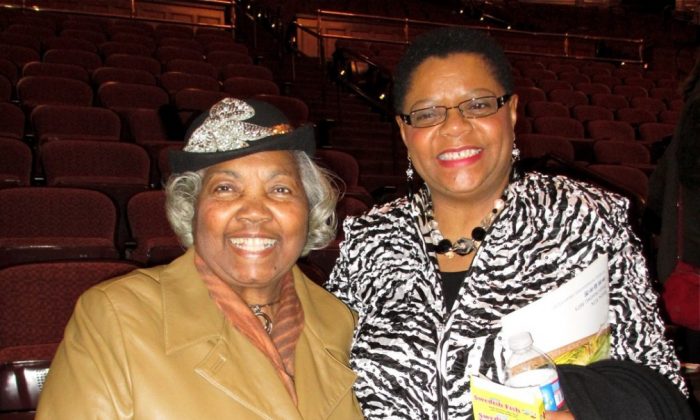 “The performance is spectacular,” said Henry Spinelli, a classical pianist since the age of four who has toured throughout the United States. “I appreciate the spectacle: the color, the positions on the stage, the grouping, and the grace of it all.”

Shen Yun criss-crosses the globe with one mission: to revive 5,000 years of divinely inspired Chinese culture, according to its website.

“Unfortunately, over the past 60 years, this cultural treasure has been persecuted and co-opted by the Chinese Communist Party,” it adds. “However, the deeper spiritual core of the ancient culture, with its values of benevolence, honor, propriety, wisdom, and sincerity, as well as a reverence for the gods and the heavens, cannot be destroyed.”

Mr. Spinelli, as a prominent musician who also teaches piano and music literature, as well as serving as director of the Laboratory School of Music, noticed Shen Yun’s orchestra, which combines Western classical instruments with ancient Chinese instruments, such as the 4,000-year-old erhu, or two-stringed Chinese violin.

“It is very effective,” said Mr. Spinelli. The combination of the music and dance is “superb,” he added. “Absolutely superb.”

Classical Chinese dance has a long history of thousands of years and, its “beautiful dance movements bring out the inner meaning of intrinsic thoughts and feelings, reflecting the peculiarities of human nature, the standard for human conduct, moral concepts, mental state, one’s value system, and so on,” according to Shen Yun’s website. “Classical Chinese dance is rich with expressive power and one of the most comprehensive dance systems in the world.”

“This is a great contribution to Pittsburgh,” said Mr. Spinelli.

Corene Ashley, a former staff assistant to Senator Arlen Specter, also attended the performance, along with her great aunt.

“Excellent,” Ms. Ashley said. “Breathtaking—just loved it. It’s magnificent. Worth every dime that we spent. Loved it. … I wish I could have brought my grandchildren.”

Along with the opening dance, Ms. Ashley highlighted two dances, including Lotus Leaves.

“Delicate yet playful, lotus maidens are at their ease when dancing atop the waters,” says Shen Yun’s program book. “The dancers’ unique full-circle fans sway like lily pads in the wind, evoking scenes of a flowering lotus garden in the summertime.”

Another dance she particularly enjoyed was Snowflakes Welcoming Spring, which portrays snowflakes gathering right before the end of spring. “Dancers take small, quick steps through snowy fields as they skillfully spin and twirl sequined handkerchiefs,” says the program book. “They delight and dazzle the eye in this northeastern folk dance. In the end, the snow finally melts to reveal winter’s parting gift: the birth of spring.”

“I just loved the way they told their story,” Ms. Ashely said, “in the musical and classical way that they did it.”